Why do we unleash evil even when we pursue the good? 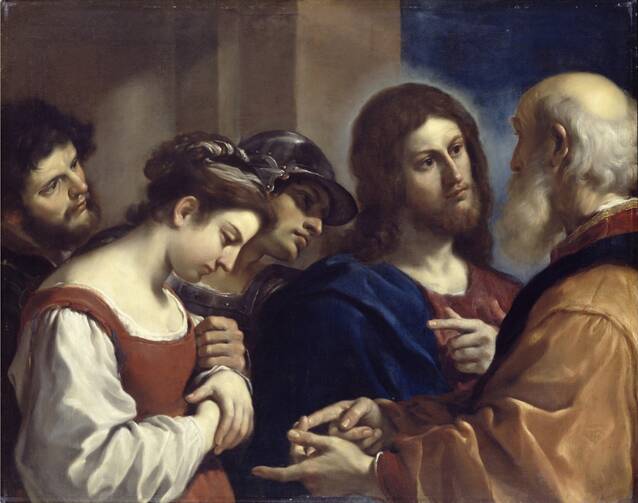 “Christ with the Woman Taken in Adultery,” by Guercino, 1621 (Wikimedia Commons)

The Good Friday Agreement of 1998 largely ended the terribly violent period of Irish history in the North known as “The Troubles.” For some, however, it introduced an ageless moral quandary. If evils are perpetrated to obtain a greater good, do they have any justification if the pursuit of that good is later abandoned?

Consider Dolours Price. As a young woman, she participated in a peaceful protest march, whose members were brutally beaten while British officials turned a blind eye. That injustice was pivotal in her decision to join the Irish Republican Army.

Dolours was arrested in the wake of the first I.R.A. bombing of London targets. She spent eight years in a British prison, enduring both a hunger strike and forced feeding, both of which nearly killed her and permanently affected her health. Moreover, during her time with the I.R.A., Dolours assisted in a number of killings—several of them were I.R.A. members adjudged to be traitors—and all of them were carried out in the name of a free and united Ireland.

If evils are perpetrated to obtain a greater good, do they have a justification if the pursuit of that good is later abandoned?

As Patrick Radden Keefe points out in his new history, Say Nothing: A True Story of Murder and Memory in Northern Ireland, a number of former I.R.A. foot soldiers felt betrayed by the peace agreement, which abandoned the violent pursuit of a united Ireland. Why was that? Because they had perpetrated great evil in the pursuit of what they considered to be an even greater good. Dolours was one of them.

She had set bombs and robbed banks and seen friends die and nearly died herself. All those awful things—and for what? As she herself put it in an interview, “I was often required to act contrary to my nature.”

If evils are perpetrated to obtain a greater good, do they have a justification if the pursuit of that good is later abandoned? The same question was posed to U.S. soldiers who fought in Vietnam. But it applies much more broadly. War always unleashes terrible evil. How often does it fail to create a good sufficient to justify its atrocities?

Unless we remove all of the people, we will never produce a sinless church, one that pursues the good without also perpetrating some evil.

This moral dilemma is not limited to war. One can fervently believe that police should be supported, but this doesn’t mean that as humans they do not sometimes perpetrate unjustified evil. Yet can we abandon policing, until we get it right?

Conversion is the true goal of biblical law.
Michael Simone

We can turn away from faith, but humans will always hunger for meaning
Terrance Klein

At the other end of this moral spectrum, consider the parent who must correct an errant child, only to realize that the tone of voice chosen seemed to convey real resentment of the child rather than loving concern. Humans cannot help but allow some evil in the pursuit of a greater good. This will always be the case for us because we simply are a mixture of good and evil.

And then there is the church. The Catholic Church should never—can never—cease to purge and purify her structures and her people. But unless we remove all of the people, we will never produce a sinless church, one that pursues the good without also perpetrating some evil.

The one without sin will not become our accuser. He will be our savior.

A woman is caught in adultery. Lots of lessons here: that the powerful oppress the weak; that men oppress women; that justice is not blind. Where is her partner?

But St. John goes deeper than all of that. Even when we humans fight against evil—and adultery is surely an evil—we cannot fail to infect the pursuit of the good with our own evil. John wants us to know that we are irretrievably caught in a web of evil. We perpetrate evil even as we try to extricate ourselves from it.

Conversion is the true goal of biblical law.
Michael Simone

We can turn away from faith, but humans will always hunger for meaning
Terrance Klein

John’s story tells us why we need a savior, why someone not caught in the ever-twisting, ever-tightening skein of sin must come to our assistance. Here is a glimpse into the fathomless depths of the Gospels. Each scene, especially this scene, reveals some measure of what the cross and resurrection mean.

Hi Father Terrence:
Reading your commentary on this passage presents a slightly different insight for me about the woman caught in adultery. I have always listened to this passage and leaned toward a lesson about being judgemental - a serious problem within my own family. But reading your commentary and then thinking about how this event might have actually been recalled by the writer some 60+ years after it occurred, I have to think that the writer (her or himself) must have re-discovered the saving grace-fullness of Jesus within this story. Jesus must have had to approach this situation with considerable strength and courage. Possibly someone's wife actually caught her husband and this woman together and roused a significant crowd of neighbors to put a permanent end to this type of behaviour which took away the power and control of all the women in the village. The adultress was a threat and Jesus even attempting to intervene on her behalf either made a very gutsy call OR was asked to intervene as the Rabbi or by the woman. In a way the Gospel writer discovers Jesus as a Savior in this context, because He must go into a heated, and violent situation and find THE PERSON. He does not condemn the woman OR the man caught in adultery. He does not change the law for adultery. If anything he allows the woman to become the healer... It is not only the woman who has 'missed the mark' in this story, her partner has also missed the mark with his wife and the wife has lost sight of what her husband is feeling about their marriage, and the crowd has taken what appears to be an obviously correct position on the matter without considering what their actions will do to the village. Your discussion of this story should be elevated to the sex abuse crisis we Catholics currently face - we stone holding bystanders need to be mindful of ALL parties in this crisis - the abused, the abuser and the handicapped hierarchy.

NGO's send foodstuffs (rice, etc.) to Haiti which undercuts the local market and their farmers, creating a perpetual cycle of dependency.
NGO's send solar streetlamps to Rohinga refugees from Myanmar, but can't allow them to use their simple kerosene lanterns.
I mean, quod erat etc., etc. When will the institutional Catholic Church begin to understand that allowing ordinary people to pursue ordinary destinations is the path..

Mother Teresa felt guilty about the tone she sometimes used in correcting her sisters. St. Bernard knew that vanity was possibly involved in motivating his preaching. Reuben knew that to save the life of Joseph he had to recommend a lesser evil, "throw him in the cistern", rather than directly killing him. (Gen. 37) So we are imperfect and live in an imperfect world. We do the best we can and leave the rest up to the Lord.

"The one without sin will not become our accuser. He will be our savior." Linking this Gospel to the cross and resurrection was a revelation to me. Thank you for this perspective.