Pope Francis celebrates largest Mass in the history of Morocco 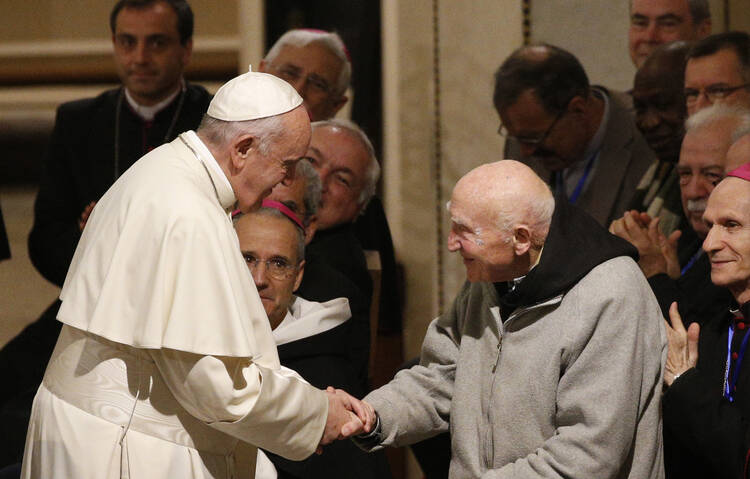 Pope Francis greets Trappist Brother Jean-Pierre Schumacher, 95, the last survivor of the 1996 massacre in Tibhirine, Algeria, who now lives in Morocco. Brother Schumacher was among priests, religious men and women and members of the ecumenical Council of Churches at the cathedral in Rabat, March 31, 2019 (CNS photo/Paul Haring).

Pope Francis concluded his historic visit to Morocco by celebrating a Mass enlivened by a mixture of Gregorian chant with the beat of drums and the rhythmic dance, music and song of 10,000 faithful—most of them migrants from countries in sub-Saharan Africa—at a sports stadium in Rabat, the capital city of this Muslim-majority country.

It was the largest Mass ever celebrated in this land, where Christianity first came between the second and third centuries but where only a tiny presence remains today.

Bishops and priests from Morocco and other countries concelebrated Mass with Pope Francis in a sports complex on the outskirts of the city. Among those attending the Mass was Brother Jean-Pierre Schumacher, O.C.S.O, the last monk survivor from the monastery of Tibhirine in Algeria. (Seven Trappist monks were killed at Tibhirine during the Algerian civil war in 1996.) Prayers were read in Arabic, French, Spanish, English and Italian.

Commenting on the Gospel reading of the day—the parable of the prodigal son—Pope Francis, speaking in Spanish, emphasized that the father’s joy “would not be complete without the presence of the other son,” so he set out to find him and invite him to the festivities. But, he recalled, the older son found it hard to accept the father’s joy when he embraced the other son, and so he was unwilling to participate in the celebration. By doing so, “he fails not only to recognize his brother, but his father as well.”

Pope Francis: "Who has the right to stay among us, to take a place at our tables and in our meetings, in our activities and concerns, in our squares and our cities? The question seems constantly to return: Am I my brother’s keeper?”

Indeed, the pope said, the older son “would rather be an orphan than a brother. He prefers isolation to encounter, bitterness to rejoicing. Not only is he unable to understand or forgive his brother, he cannot accept a father capable of forgiving, willing to wait patiently, to trust and to keep looking, lest anyone be left out: in a word, a father capable of compassion.”

Francis remarked that “at the threshold of that home, something of the mystery of our humanity appears,” and what we see “is the tension we experience in our societies and in our communities and even in our own hearts—a tension deep within us ever since the time of Cain and Abel. We are called to confront it and see it for what it is. For we, too, ask: ‘Who has the right to stay among us, to take a place at our tables and in our meetings, in our activities and concerns, in our squares and our cities?’” The question seems constantly to return: “Am I my brother’s keeper?”

At the threshold of that home, Francis said, “we can see our own divisions and strife, the aggressiveness and conflicts that always lurk at the door of our high ideals, our efforts to build a society of fraternity, where each person can experience even now the dignity of being a son or daughter.” But there, too, at that same threshold, “we will also see in all its radiant clarity, with no ifs and buts, the father’s desire that all his sons and daughters should share in his joy. That no one should have to live in inhuman conditions, as his younger son did, or as orphaned, aloof and bitter, like the older son. His heart wants all men and women to be saved and to come to the knowledge of the truth.”

Francis acknowledged that “many situations can foment division and strife, while others can bring us to confrontation and antagonism,” and “often we are tempted to believe that hatred and revenge are legitimate ways of ensuring quick and effective justice.” But “experience tells us that hatred, division and revenge succeed only in killing our peoples’ soul, poisoning our children’s hopes and destroying and sweeping away everything we cherish.”

He reminded those present and others watching on television that “Jesus invites us to stop and contemplate the heart of our Father. Only from that perspective can we acknowledge once more that we are brothers and sisters. Only against that vast horizon can we transcend our shortsighted and divisive ways of thinking and see things in a way that does not downplay our differences in the name of a forced unity or a quiet marginalization.”

Francis said “the greatest legacy and wealth of a Christian” is to see things with “the compassion and loving eyes of the Father,” and in this way, “instead of measuring ourselves or classifying ourselves according to different moral, social, ethnic or religious criteria, we should be able to recognize that another criterion exists, one that no one can take away or destroy because it is pure gift. It is the realization that we are beloved sons and daughters, whom the Father awaits and celebrates.”

Francis warned believers against “the temptation of reducing the fact that we are his children to a question of rules and regulations, duties and observances."

Francis warned believers against “the temptation of reducing the fact that we are his children to a question of rules and regulations, duties and observances,” and said “our identity and our mission will not arise from forms of voluntarism, legalism, relativism or fundamentalism but rather from being believers who daily beg with humility and perseverance: ‘May your Kingdom come!’”

Returning to the Gospel parable, Francis noted that “it leaves us with an open ending. We see the father asking the older son to come in and share in the celebration of mercy. The Gospel writer says nothing about what the son decided.” Then applying the parable to the situation in which these believers live, the pope (himself the son of migrants to Argentina) said, “we can imagine that this open ending is meant to be written by each individual and every community. We can complete it by the way we live, the way we regard others and how we treat our neighbor.” He reminded them that as Christians we know that “in the Father’s house there are many rooms: The only ones who remain outside are those who choose not to share in his joy.”

Pope Francis to migrants in Morocco: ‘You are at the center of the church’s heart.’
Gerard O’Connell

He concluded his homily by thanking Moroccan Christians “for the way in which you bear witness to the Gospel of mercy in this land” and for “your efforts to make each of your communities an oasis of mercy.” He encouraged them “to continue to let the culture of mercy grow, a culture in which no one looks at others with indifference or averts his eyes in the face of their suffering,” and “to keep close to the little ones and the poor and to all those who are rejected, abandoned and ignored” and in this way to “continue to be a sign of the Father’s loving embrace.”

He also again encouraged the Christians in Morocco “to persevere on the path of dialogue with our Muslim brothers and sisters and to cooperate in making visible that universal fraternity which has its source in God.” He prayed that they may all “be servants of the hope that our world so urgently needs” and asked them “please, do not forget to pray for me.”

After Mass, Pope Francis drove to the airport to take the plane back to Rome, and en route he will give a press conference.

Interesting and this is where the new emerging Church will be found.