Pope Francis in Morocco: "Let us build bridges" between Christianity and Islam 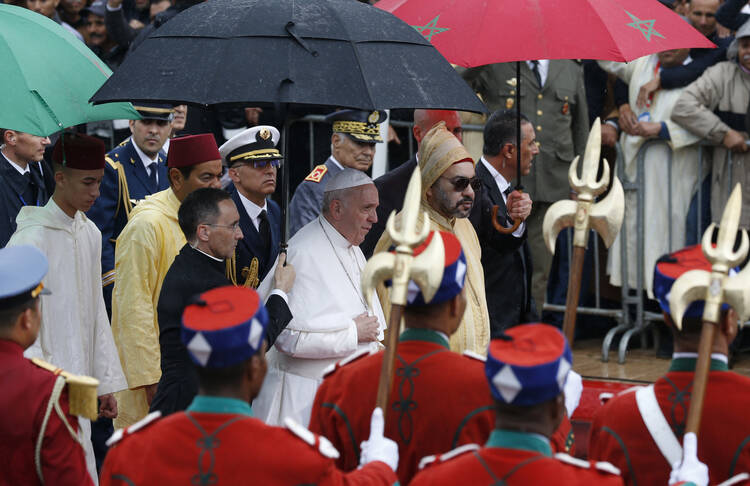 Pope Francis attends a welcoming ceremony with King Mohammed VI of Morocco in the square outside the Royal Palace in Rabat March 30, 2019 (CNS photo/Paul Haring).

In his first major speech in Morocco, Pope Francis emphasized “the importance of religion in building bridges between people” and in countering “fanaticism and extremism.” He also made a strong appeal for a positive response of solidarity to the global migration crisis.

Pope Francis was greeted at Rabat International Airport by King Mohammed VI, a descendant of the Prophet Mohammed, and a royal guard of honor. From there, the pope and the king drove in parallel motorcades among cheering crowds and rain to the Hassan Tour esplanade in Rabat, the capital of this North African Islamic kingdom of 35 million people, where he addressed the people of Morocco watching on television as well as the civil authorities and members of the diplomatic corps.

At the esplanade, the Moroccan king gave him a formal welcome, and then they both stood as a band played the respective national anthems of Morocco and the Vatican City State. King Mohammed VI said his visit took place in a month “of historic significance” because it was in this month many centuries ago when, “at the behest of the prophet Mohammed,” Muslims fleeing persecution “left Mecca to take refuge with the Negus, the Christian king of Abyssinia.”

He described that as “the first welcoming, during which Islam and Christianity made acquaintance with each other,” and suggested that today’s visit by Francis would help to develop this mutual knowledge and friendship.

Describing himself as “Commander of the Faithful," King Mohammed VI of Morocco emphasized that “I cannot speak of the land of Islam as if only Muslims lived there."

Describing himself as “Commander of the Faithful," the King emphasized that “I cannot speak of the land of Islam as if only Muslims lived there,” and that he was keen to ensure the freedom “to practice the religions of the book.” He added, “I protect Moroccan Jews as well as Christians from other countries who are living in Morocco.”

He called for the development of interreligious dialogue, and the need to go beyond “tolerance.” He said that radicalism—whether motivated by religion or not—is due to a failure to know each other and to ignorance, and he emphasized the importance of education in counteracting it. The king said he followed “with interest and appreciation” the pope’s efforts to foster peace and promote dialogue and education and his call for moderation. He felt that he and the pope “can speak with one voice” on these issues.

Pope Francis thanked the king for his kind invitation and said his visit gave him “a significant opportunity for advancing interreligious dialogue and mutual understanding among the followers of our two religions, as we commemorate—at a distance of eight centuries—the historic meeting between Saint Francis of Assisi and Sultan al-Malik al-Kamil.” He told his nationwide audience that “that prophetic event shows that the courage to encounter one another and extend a hand of friendship is a pathway of peace and harmony for humanity, whereas extremism and hatred cause division and destruction.” He said he hoped his visit would “strengthen the bonds of sincere friendship,” mutual respect and cooperation between Christians and Muslims “and enable our communities to prepare a better future for coming generations.”

Pope Francis called for "a world of greater solidarity, marked by honest, courageous and indispensable efforts to promote a dialogue respectful of the richness and distinctiveness of each people and every individual.”

Noting Morocco’s geographic position as “a natural bridge between Africa and Europe,” he affirmed the need for mutual cooperation “in giving new impetus to the building of a world of greater solidarity, marked by honest, courageous and indispensable efforts to promote a dialogue respectful of the richness and distinctiveness of each people and every individual.” He said Christians and Muslims alike are called “to rise to this challenge, especially at the present time, when our differences and our lack of reciprocal knowledge risk being exploited as a cause for conflict and division."

One month ago, Francis traveled to Abu Dhabi and signed a landmark document on promoting good relations between Christians and Muslims with Ahmed el-Tayeb, the Sheik of Al Azhar and the head of the authoritative institution of Sunni Islam. He sees his visit today as a continuation of that Document on Human Fraternity and today told his Moroccan audience, “we are called to pursue this path (of building bridges) tirelessly, in the effort to help each other overcome tensions and misunderstandings, clichés and stereotypes that generate fear and opposition” and foster “a fruitful and respectful spirit of cooperation.”

The King of Morocco has done much to counter extremism and violence in Islam, including the establishment of the Mohammed VI Institute for training imams for his own and other African countries. Francis expressed his support for these educational efforts and said “it is likewise essential that fanaticism and extremism be countered by solidarity on the part of all believers, grounded in the lofty shared values that inspire our actions” because these are “an offense against religion and against God himself.”

The pope spoke in Italian, but his Coptic secretary, Monsignor Yoannis, translated simultaneously into Arabic. Francis praised Morocco for its tolerance to other religions, and recalled that an International Conference on the rights of religious minorities in Muslim countries was held in Marrakech in January 2016 and “condemned any exploitation of religion as a means of discriminating against or attacking others.” Then in a gentle hint to the Moroccan authorities who limit full freedom of religion, Francis highlighted the fact that that conference “stressed the need to move beyond the concept of religious minority in favor of that of citizenship and the recognition of the value of the person, which must have a central place in every legal system.”

He also praised the establishment of the Al Mowafaqa Ecumenical Institute in Rabat in 2012, which is an initiative of Catholics and other Christian denominations in Morocco to help promote ecumenism, as well as dialogue with culture and with Islam. Such initiatives are ways “to halt the misuse of religion to incite hatred, violence, extremism and blind fanaticism, and the invocation of the name of God to justify acts of murder, exile, terrorism and oppression.”

Francis also recalled that the International Conference on Climate Change, COP 22, was held here in Morocco, and emphasized the need for Christians and Muslims to work together “to protect this planet where God has placed us to live and to contribute to a true ecological conversion for the sake of integral human development.”

Pope Francis then turned to the plight of migrants in Morocco and worldwide. “Today’s grave migration crisis represents an urgent summons for concrete actions aimed at eliminating the causes that force many people to leave country and family behind,” he said, “often only to find themselves marginalized and rejected.”

Pope Francis: “The issue of migration will never be resolved by raising barriers, fomenting fear of others or denying assistance to those who legitimately aspire to a better life for themselves and their families.”

He recalled that in Morocco last December the Intergovernmental Conference on the Global Compact for safe, orderly and regular migration was held and “adopted a document intended to serve as a point of reference for the entire international community.” At the same time, he said, “much still remains to be done, especially in passing from the commitments undertaken there, at least in principle, to concrete actions, and, more particularly, to a change of attitude towards migrants, one that sees them as persons, not numbers, and acknowledges their rights and dignity in daily life and in political decisions.”

In words that seemed to be targeted beyond the borders of Morocco, at Western Europe and the United States, Francis declared, “The issue of migration will never be resolved by raising barriers, fomenting fear of others or denying assistance to those who legitimately aspire to a better life for themselves and their families.” He said, “We know too that the consolidation of true peace comes through the pursuit of social justice, which is indispensable for correcting the economic imbalances and political unrest that have always had a major role in generating conflicts and threatening the whole of humanity.”

As he concluded, Francis added, “May the Almighty, Gracious and Merciful, protect you and bless Morocco! Thank you.”

The issue of migration is much more complex than people fleeing persecution which they are powerless to resist.
Besides that, many people aspire to benefit themselves and their children, by moving to a community which has laboured to establish stability in order and reliable provision of food and other essentials. They did not just pick it off trees in a garden like Eden.
Understandable, and even tolerable, if they also strive to assimilate, join themselves and their offspring to the culture which created the social and material benefits.
Intolerable if they insist on the benefits but refuse to change behaviour and language.
And then there is invasion.

A scholarly, reliable, and pertinent history of the explosion of a small Arab new religion, Islam, into a vast number of other people's traditional land is available. Apart from Indian subcontinent and China, they were almost all Christian lands.
It demonstrates that one of the tactics, preached as well as observed, is to "migrate" as the contribution of some individuals to their duty of waging jihad.

Islam has a well-tried and frequently practised doctrine of deception, they do not engage in dialogue. Ask the people of Israel how well talking with the Middle East Arabs calling themselves Palestinians is taking them towards peace.

"true peace comes through the pursuit of social justice, which is indispensable for correcting the economic imbalances and political unrest that have always had a major role in generating conflicts and threatening the whole of humanity" Nonsense.
Up till 200 years ago the entire world was poor except for a tiny ruling class and an small area in England and Holland. Before that wealth was mainly generated by taking it from others. It would be nice if the Pope acknowledged what causes economic imbalances. It is the choices the poor countries pursue.

"Build a bridge".. lol what, like London Bridge? Build a bridge, and they'll hijack the bridge and make it a sharia zone. How does Christianity (or in this case Catholicism) build a bridge with the Anti-Christ Mohammed?