Pope Francis to migrants in Morocco: ‘You are at the center of the church’s heart.’ 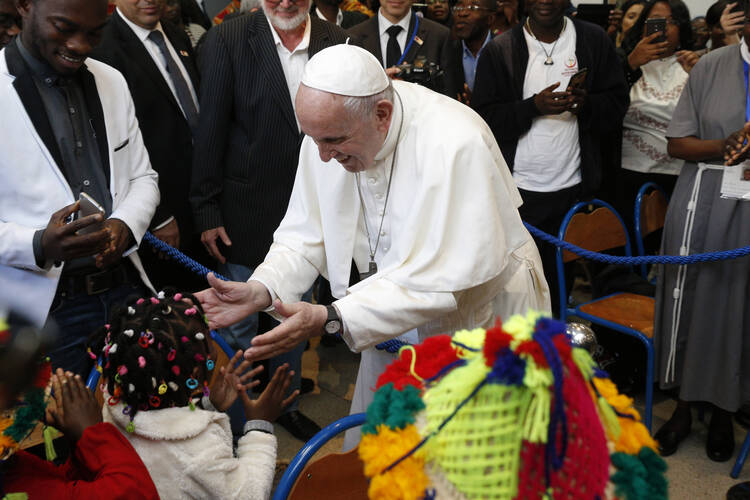 Pope Francis greets children as he arrives for a meeting with migrants in the Caritas center in Rabat, Morocco, March 30, 2019 (CNS photo/Paul Haring).

Pope Francis concluded his first day in Morocco with a close focus on migration, speaking strongly on behalf of migrants at a small Caritas center in the capital city of Rabat. The center provides assistance not only to needy members of the local Moroccan population but also to more than 8,000 migrants each year from many African countries who see this country as a transit point to Europe.

He expressed his joy at being with them “to discuss a great and deep wound that continues to afflict our world at the beginning of this 21st century: a wound that cries out to heaven.”

Francis had already addressed the question of migration in his address to the people of Morocco and government officials, but in his visit to the Caritas offices he returned to the question in more detail. Unlike his opening address, his talk at Caritas was not broadcast on national television, perhaps because the issue of undocumented migrants is a sensitive one in Morocco.

Pope Francis: The faces of migrants "shatter and debunk all those false idols that can take over and enslave our lives; idols that promise an illusory and momentary happiness blind to the lives and sufferings of others."

“We do not want our response to be one of indifference and silence," Francis said after listening to testimonies from two migrants. "This is all the more the case today, when we witness many millions of refugees and other forced migrants seeking international protection, to say nothing of the victims of human trafficking and the new forms of enslavement being perpetrated by criminal organizations.” Indeed, “no one can be indifferent to this painful situation.”

He thanked the local archbishop, Santiago Agrelo Martínez, O.F.M., for the Church’s work in assisting migrants, and he also thanked the members of associations dedicated to their care. “All of us are called to respond to the many challenges posed by contemporary movements of migration with generosity, enthusiasm, wisdom and farsightedness,” he continued, “each to the best of his or her ability.”

As he had done earlier in his address to the Moroccan people and the civic authorities, Francis recalled last December’s intergovernmental conference at Marrakech that adopted the Global Compact for safe, orderly and regular migration. “The migration compact represents an important step forward for the international community, which now, in the context of the United Nations, has for the first time dealt on a multilateral level with this theme in a document of such importance,” Francis said. It “helps us to see that ‘it is not just about migrants,’ as if their lives and experiences were completely unrelated to the rest of society, or their status as persons with rights was somehow ‘on hold’ because of their current situation.” The compact, he continued, shows that “the side of the border on which a migrant stands does not make him or her more or less human.”

Pope Francis: "The side of the border on which a migrant stands does not make him or her more or less human.”

Pope Francis told the Caritas workers and migrants (in words that were clearly aimed at a wider audience both here and in the countries of Western Europe and elsewhere), that “many positive steps have been taken in different areas, especially in the developed countries,” but we cannot forget that the progress of our peoples cannot be measured by technological or economic advances alone. “It depends above all on our openness to being touched and moved by those who knock at our door,” he said. “Their faces shatter and debunk all those false idols that can take over and enslave our lives; idols that promise an illusory and momentary happiness blind to the lives and sufferings of others.” Indeed, he remarked, “how arid and inhospitable a city becomes, once it loses the capacity for compassion!”

Turning to the migrants, he told them: “You are not the marginalized; you are at the center of the church’s heart.”

Pope Francis: "Wow arid and inhospitable a city becomes, once it loses the capacity for compassion!”

Four verbs, Francis continued, express well what needs to be done to assist migrants in their plight today: “accept; protect; promote; and integrate.”

Francis commented that he liked to think “the very first volunteer, assistant, rescuer or friend of a migrant is another migrant who knows at first hand the sufferings of the journey.” But “we cannot develop large-scale strategies capable of restoring dignity by adopting a welfare approach alone. That kind of assistance is essential, but insufficient.”

“In view of the current situation, welcoming means, above all, offering broader options for migrants and refugees to enter destination countries safely and legally,” Francis added in words clearly again meant for an international audience. “Expanding regular migration channels is one of the main objectives of the Global Compact” and “this shared commitment is needed in order to avoid presenting new opportunities to those ‘merchants of human flesh’ who exploit the dreams and needs of migrants.” Indeed, “until this commitment is fully implemented, the emergency of irregular migration has to be met with justice, solidarity and mercy.”

Francis stated that “forms of collective expulsion, which do not allow for the suitable treatment of individual cases, are unacceptable.” On the other hand, he said (again citing the Global Compact), “special legalization strategies, especially in the case of families and minors, should be encouraged and simplified.”

In the context of the North African region, the pope said, “protection must first and foremost be ensured along migration routes, which, sadly, are often theaters of violence, exploitation and abuse of all kinds.” He added that it is “necessary to pay particular attention to migrants in situations of great vulnerability: to the many unaccompanied minors and to women,” and it is also “essential that everyone be guaranteed the right to the medical, psychological and social assistance needed to restore dignity to those who have lost it along the way.”

Promotion, on the other hand, “means ensuring that everyone, migrants and local residents alike, can enjoy a safe environment in which they can develop all their gifts,” the pope said. “It begins with the recognition that no human being is worthy of being discarded, but rather should be seen as a potential source of personal, cultural and professional enrichment in whatever place they find themselves.” He emphasized that “host communities will be enriched if they learn how best to appreciate and utilize the contribution made by migrants, while working to forestall all forms of discrimination and xenophobia.” He offered encouragement to “programs of international cooperation and transnational development free of partisan interests, which involve migrants as active protagonists.”

“Integrating means engaging in a process that enhances both the cultural heritage of the welcoming community and that of migrants, thus building an open and intercultural society,” Francis said. “It is not easy—for those who arrive and for those who receive them—to encounter a foreign culture, to put ourselves in the shoes of people quite different from ourselves, to understand their thoughts and their experiences,” and so “we often refuse to encounter the other and raise barriers to defend ourselves.” But, he said, “integrating requires us not to be conditioned by fear and ignorance.” Instead, we should recognize that “ahead of us is a journey we must make together, as true travelling companions. It is a journey that engages everyone, migrants and locals, in building cities that are welcoming, respectful of differences and attentive to intercultural processes. Cities that are capable of valuing the richness of the diversity born of our encounter with others.”

Making Migration Work for Women
From AP, CNS, RNS, Staff and other sources

Pope Francis concluded his talk by telling the “migrant friends” that “the church is aware of the sufferings that accompany your journey and she suffers with you. In reaching out to you in your very different situations, she is concerned to remind you that God wants us all to live our lives to the full. The church wants to be at your side to help you achieve the very best for your life.”

He again thanked the Caritas personnel and its partner agencies “who have the honor of showing God’s merciful love to so many of our brothers and sisters in the name of the whole church,” and told them “you know well from experience that for Christians, ‘it is not just about migrants,’ for it is Christ himself who knocks on our doors.”

Tomorrow, Sunday, he will spend time with the Christian community in Rabat, and return to Rome tomorrow evening.

Years ago, when I worked in a group home caring for disabled men, several of my co-workers were immigrants from Liberia. They had fled from a brutal civil war, seeking a better life for themselves and for their families. I believe in improving border security, but oppose building a wall along our border with Mexico. I agree with Pope Francis that it's particularly important to welcome immigrants who are victims if violence or extreme poverty. Although I don't think our nation has the responsibility to accept an unlimited number of immigrants, I do believe that we have the means to welcome many more immigrants.