Vatican pushes back about work conditions at U.N. mission

Vatican pushes back about work conditions at U.N. mission 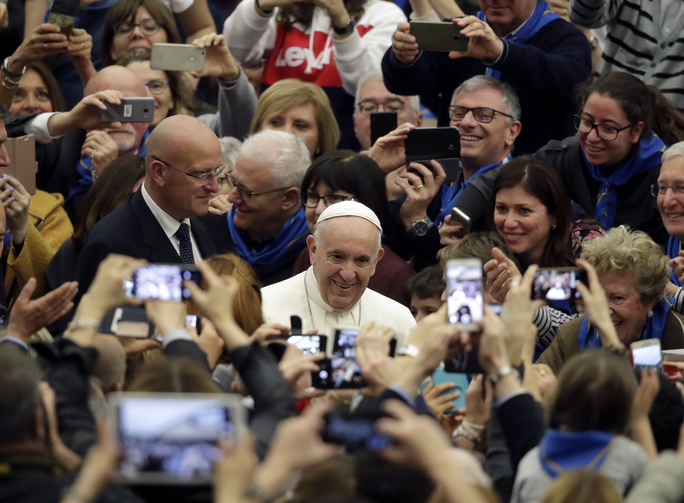 Pope Francis arrives for a audience with members of the confederation of the Italian cooperatives in the Paul VI Hall at the Vatican, Saturday, March 16, 2019. (AP Photo/Alessandra Tarantino)

VATICAN CITY (AP) — The Vatican is pushing back against whistleblower reports about problematic work conditions at its U.N. mission in New York under its former ambassador, in the latest scandal implicating the Holy See's diplomatic corps.

The carefully worded statement was responding to a March 11 report in the Crux online Catholic site about complaints from former staff about poor and possibly noncompliant work conditions during the 2010-2014 tenure of Archbishop Francis Chullikatt. On Saturday, Catholic News Agency also reported allegations of inappropriate sexual behavior by Chullikatt, currently the Vatican's ambassador in Central Asia.

Both stories cited unnamed former staff as well as Terrence McKeegan, a legal advisor to the mission, who said he flagged issues of "serious moral and financial corruption" to the Vatican in 2013.

In an email Saturday to The Associated Press, McKeegan stood by his original complaint and said he and eight other staffers at the mission had their salaries unilaterally cut or underpaid by Chullikatt.

He provided the Jan. 1, 2014, email where the former ambassador told him to find someone else to pay his salary for the remainder of his one-year contract, apparently in retaliation for having contacted the Holy See several months earlier about the alleged wrongdoing.

In its first-ever U.N. vote, the Holy See says ‘No’ to nuclear weapons
Drew Christiansen, S.J.

McKeegan noted the Vatican had not contested his core complaints about underpayment of staff.

"No matter how you slice it, once you factor in all of the overtime that the domestic or household staff had to work ... they were not being paid justly, whether you want to measure that by state minimum wage or a just or fair wage," he said.

The March 11 mission statement addressed only the Crux report. The mission said Saturday it didn't have an immediate comment on the subsequent CNA report alleging inappropriate behavior.

"The fact is that the serious allegations I made against Chullikatt were never properly investigated by the Vatican, which follows a pattern in so many other cases involving high-ranking officials in the Catholic Church," he said in the email.

The reports are the latest to implicate members of the Vatican's diplomatic corps, who like all diplomats enjoy immunity while serving overseas. In 2017, Francis moved to shore up oversight over the corps by creating a new diplomatic section in the secretariat of state to increase the Vatican's role in selecting and training its envoys.

Recently, French prosecutors placed the Vatican's French ambassador under investigation for alleged sexual misconduct. Prior to that, an adviser to the Vatican's embassy in Washington D.C. was convicted by a Vatican court of possession and distribution of child pornography.

That same tribunal planned to prosecute the Holy See's ambassador to the Dominican Republic for sexually abusing minors, but he died before the trial got underway.

Independent of those investigations, the Holy See's former ambassador to the U.S. sparked a crisis in Pope Francis' papacy last year by accusing him and a long list of Vatican officials before him of covering up for ex-Cardinal Theodore McCarrick. The American cleric was recently defrocked by Francis for sexually abusing minors and adults.