In its first-ever U.N. vote, the Holy See says ‘No’ to nuclear weapons 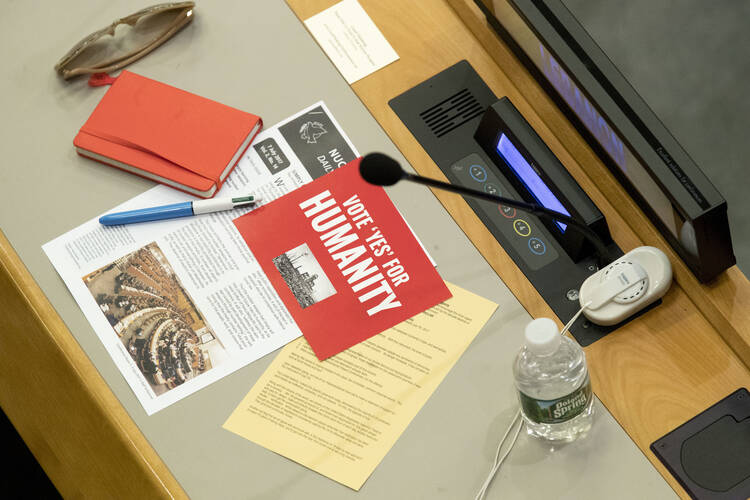 Leaflets are seen on a delegates desk before a vote by the conference to adopt a legally binding instrument to prohibit nuclear weapons, leading towards their total elimination, Friday, July 7, 2017 at United Nations headquarters. (AP Photo/Mary Altaffer)

With its first-ever vote at the United Nations, the Holy See voted in favor of nuclear disarmament. Usually a permanent observer with standing to speak and to participate in negotiations, the Holy See, along with the State of Palestine, had been granted status as a full member state with voting rights in a procedural vote of the U.N. conference on nuclear weapons in late June.

On July 7, the Holy See exercised that vote to join a 122-1-1 majority to adopt a draft treaty forbidding states to “develop, test, produce, manufacture, otherwise acquire, possess or stockpile nuclear weapons or other nuclear explosive devices.” The treaty also prohibits nations from transferring nuclear weapons and from allowing weapons to be stationed or deployed in their territory. The Netherlands, a stand-in for the North Atlantic Treaty Organization, voted ‘No’; Singapore abstained. The United States and the world’s eight other known nuclear powers did not participate in the conference or vote on the treaty.

With its first-ever vote at the United Nations, the Holy See voted in favor of nuclear disarmament.

Following the vote, Msgr. Simon Kassas, who led the Holy See delegation, told the assembled delegations, “Our gathering these past three weeks represents the global majority taking responsibility for a brighter future for humanity.” He continued: “This ban treaty is but a beginning. There is much to do yet to persuade those not in this room that the ban is in the interest of their people and of their States.”

In particular, he cited the need to make progress on General and Complete Disarmament, a provision of the Non-Proliferation Treaty of which the Holy See is a signatory. In a note of realism amid the euphoria on the floor, Msgr. Kassas explained, “No nuclear weapon state will be persuaded to eliminate its weapons without assurance it will not then be left facing a conventional imbalance of forces.”

Msgr. Kassas concluded by telling the delegates and civil society members: “Today we have struck one more blow on the anvil of history fulfilling the prophecy of Isaiah, ‘They beat their swords into ploughshares and their spears into pruning hooks.... And never again will they learn war.’” He pledged to the other conferees that the Holy See will “continue to walk with you along the paths of peace.” Indeed, many in attendance privately hoped for a further endorsement from Pope Francis.

Many in attendance privately hoped for a further endorsement from Pope Francis.

Besides the sweeping prohibitions of Article 1, notable aspects of the treaty include requirements for care of victims of nuclear explosions and testing, environmental remediation of affected areas, provisions for supervised elimination of nuclear weapons systems, and a competent international authority to oversee the destruction of weapons systems.

Negotiation of the treaty was authorized by the United Nations General Assembly last fall in a response to a series of three international conferences held in Oslo, Nayarit (Mexico) and Vienna in 2014 on the humanitarian consequences of nuclear weapons, which gave new momentum to the movement to ban the bomb.

It was at the Vienna conference in December 2014 that the Holy See released its major study paper “Nuclear Disarmament: Time for Abolition.” In a message to the conference, Pope Francis declared, “I am convinced that the desire for peace and fraternity planted deep in the human heart will bear fruit in concrete ways to ensure that nuclear weapons are banned once and for all, to the benefit of our common home.”

This year’s conference was opened in late March with a message from the pope and an address by the secretary general of the International Committee of the Red Cross, and it resumed on June 15 for three weeks of negotiation. It was a challenging task with more than 130 states present for the opening March session.

“We must not await another Hiroshima or Nagasaki...before mustering the political will to banish these weapons from arsenals.”

Advocacy groups and academic and religious organizations were also invited to participate. They were allotted time to speak, held educational side events and their experts held interactive dialogues on technical issues with the delegates. The assembled delegations made clear their desire to extend this interaction between member states and civil society at future U.N. events.

Latin America, which was observing the 50th anniversary of the declaration of the world’s first nuclear-weapons-free zone under the Tlatelolco Treaty, played an especially strong role. Ambassador Elayne Whyte-Gomez of Costa Rica served as the conference president.

Ambassador Whyte-Gomez provided creative leadership, using a variety of formats to carry on the deliberations: standard plenaries, off-the-record plenaries, interactive dialogues between members and experts, and informal working groups that tried to hammer out differences on contested issues.

When the informal working groups found themselves bogged down, Latin American ambassadors inevitably rose to give the deliberations renewed momentum. An especially articulate representative was South Africa’s Nozipho Mxakato-Diseko. Her constructive interventions also moved the conferees beyond potential impasses at critical moments.

In her concluding address on July 7, Ambassador Nozioho Mxakato-Diseko declared it “an epoch-making day.” She affirmed: “We have definitely said never, ever, ever again.... We must not await another Hiroshima or Nagasaki...before mustering the political will to banish these weapons from arsenals.”

Drew Christiansen, S.J., former editor in chief of America, is Distinguished Professor of Ethics and Global Human Development at Georgetown University. He attended the U.N. conference as an expert with the Holy See mission.