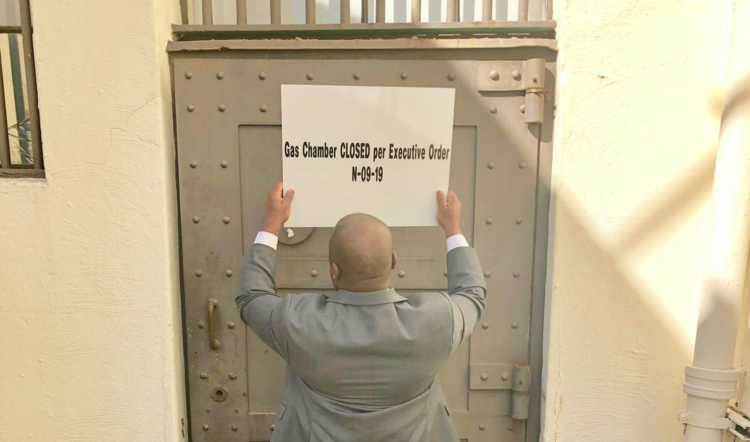 In the past two years, I have been reminded many times of why I am happy to call myself a Californian. Forget for a moment the droughts and fires, the floods and mudslides, the overpriced housing and overvalued trappings. We Californians are fighting the good fight. Among other matters, we have stood up for the rule of law, the rights of immigrants and the survival of the planet. Now our new governor has imposed a moratorium on the application of capital punishment, and I feel prouder than ever to live in the Golden State.

Gov. Gavin Newsom’s executive order provides a reprieve for the 737 inmates who are currently housed on California’s death row in San Quentin State Prison. The order does not release any prisoners or alter any sentences they are serving. It repeals the state’s lethal injection protocol and directs that the death chamber at San Quentin be closed immediately. The governor is not one to cloud his words with political ambiguity: “My ultimate goal is to end the death penalty in California,” he said at a news conference in Sacramento.

Of course, not all Californians back the governor’s decision. The blue fabric of our state contains swaths of red, one of which I inhabit. Among other outraged supporters of the death penalty, Tom Lackey, the state assembly member who represents my neighborhood, decried the governor’s order. “Death row inmates are not ordinary criminals,” Mr. Lackey said. “They are kidnappers. They are cop killers. They are rapists who murdered their victims. These are the monsters Gov. Newsom is protecting.”

Human beings are created in the image and likeness of God; hence it is a self-evident truth that we are not monsters.

His statement brings up one big reason I am against the death penalty: Human beings are not monsters.

Human beings are created in the image and likeness of God; hence it is a self-evident truth that we are not monsters. History proves that when we label others as less than human, as monkeys or cockroaches or monsters, we then feel justified in persecuting in unspeakable ways those we have dehumanized. Using the kind of language that intentionally strips the essential humanity from other humans allows us to walk a cruel path in good conscience. When a government sanctions the subhuman designation of other people, whole groups are subjected to state-sponsored segregation, maltreatment, exile, execution or even genocide.

It is true that human beings do terrible things to one another. Some of us kidnap and murder and rape. Our penal systems struggle to apply the optimal combination of incarceration and rehabilitation for people who break the law, especially in the most shocking instances of crime. But we err when we forget that every human being is a beloved child of God. Every living person, no matter how damaged or depraved or mentally ill, holds within himself or herself the spark of the innate dignity of life.

The most compelling reason not to execute the convicted is an existential one: We humans are not God.

There are many valid arguments against capital punishment that are practical: It is extraordinarily costly; it has not been shown to be an effective deterrent to future crime; it is applied unequally and unjustly along economic and racial lines; it is not necessary to secure public safety; it is irreversible in the event of exonerating evidence. All of these points are well documented.

The most compelling reason not to execute the convicted, however, is an existential one: We humans are not God. Killing another human being as punishment or deterrent is playing God. It is taking away another person’s possibility of redemption. We righteous ones do not get to decide who does not deserve or who forfeits the divine spark of life.

Having worked closely with prison inmates, I know I personify the bleeding heart that Mr. Lackey no doubt thinks is misguided. I cop to the bleeding, but I also credit that work with teaching me to be slow to judge and quicker to witness. It taught me that I am no more or less worthy of God’s lavish mercy than anyone else and that no one is irredeemable. Better a bleeding heart than a hardened heart.

Californians will continue to argue with each other as we take positions for and against Governor Newsom’s moratorium. I imagine the issue will again come before us voters to decide whether we will abolish the death penalty permanently. For today, however, I am heartened that the Golden State is living up to the Golden Rule. California is known for birthing many movements that go nationwide—some wacky and weird, some positive and progressive. We may not have started this trend, but I sure hope we have made it cool and enlightened for the rest of the country to eliminate the death penalty. Our shared humanity requires no less.

I agree. I wish we felt the same way about dropping bombs on civilians !

California is a strange place. They want to save the lives of the guilty, but kill the innocents.

These condemned criminals have been judge WORTHY of death by California citizens in their trial. Ordinary citizens in a jury have been given the chance to say, no, this criminal does not deserve to die; but faced with the horror of their crimes, the criminal has been deemed death worthy. We have voted on this issue, and the PEOPLE’s will is the death penalty. The governor supports paying for the murdering of innocent children in the womb, yet plays like he is some sort of honorable person in acting like a dictator and denying the people’s will. One day, it will explode in your faces as the masses rebel. But then, ignorant people keep reliving history.....

Good for the governor of California!

So, are you flying down to New Zealand to give the perp a big hug? Probably.

And to submit this as a Democrat/ Republican issue shows the author's, well, loving hatred and arrogance. So what else is new. Personally, I'm sick of people who demean other groups of people due to the perceived righteous of their position. Kinda makes you want to stop going to Church sometimes.

I agree that it's good to work for the survival of our planet. I occasionally contribute to the Catholic Climate Covenant, a pro-life environmental group. I also certainly am glad that California stands up for immigrants. I live in a nursing home, and many of the staff are immigrants from African nations. I was very much saddened when I learned recently that Elizabeth, who is an immigrant from Kenya with two sons still in her homeland, had quit. She was my favorite nurse, very caring and accomodating to the personal needs of we residents. Years ago, I worked as a caregiver in a group home with disabled men. Several of my co-workers were immigrants from Liberia. They had fled from a brutal civil war seeking a better life in our nation. I commend you for working in a,prison. Two of my friends (one is really merely an acquaintaince) in our nursing home were prisioners, and although they at times can be a,little "rough around the edges," they certainly aren't "monsters." I agree that "every human being is a beloved child of God." I'm a retired Special Education teacher who instructed children who were brain damaged. Despite the challenges that they faced (and frankly caused those of us who cared for them to face) I don't regret caring for them, even their most personal needs. I still send Birthday and Christmas cards to one of my former students who is now 40. Back to my admittedly limited experience with prisoners. For years I've been a pen pal with a man serving life in prison for a serious crime. From our correspondence, I'm convinced that my friehd, a devout Jehovah's Witness, has reformed his life. I certainly don't want anyone to "play God" and kill by capital punishment anyone convicted of any crime, no matter how heinous. (I frankly am not sure why my pen pal/friend is serving a life sentence, but ultimately it doesn't matter to me). I commend Governor Newsom for placing a moratorium on the death penalty. According to the Death Penalty Information Center, a 2011 study estimated that California had spent more than $4 billion on death penalty trials, appeals, and incarcerations. If the death penalty was,abolished, it was estimated that $170 million would he saved by the state each year. Surely, that money saved could be better spent on rehabilitation programs for criminals, and counseling for crime victims. Governor Newsom noted that 164 wrongly convicted prisoners had been exonerated from our nation's death rows since 1973. It is very disturbing that any innocent human being could be killed. However, it must be noted that Governor Newsom staunchly favors the violence of legal abortion for any reason (the present law due to the 1973 Supreme Court decisions Roe v. Wade and Doe v. Bolton). How tragic that Newsom doesn't see the deliberate killing of almost 1_million innocent unborn human beings each year as a terrible injustice and violation of the right to life.

How this can even be a debate within a Catholic community is sad. Read the Catechism.