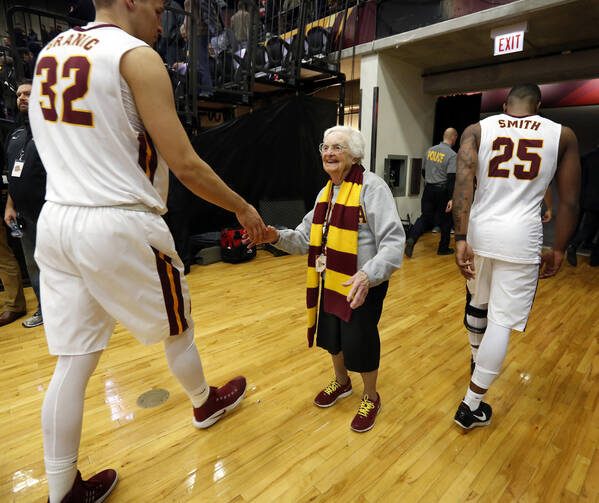 Jean Dolores Schmidt, B.V.M., hardly needs an introduction. As the Loyola University Chicago men’s basketball team shocked the nation with its Cinderella run to the Final Four of the N.C.A.A. tournament in 2018, Sister Jean, the team’s chaplain, became an international symbol of hope and faith. I met Sister Jean as an undergraduate student at Loyola and called her ahead of this year’s March Madness to ask her what she wants her athletes—and the rest of us—to know about her faith and who God is. (The interview has been edited for length and clarity.)

How do you pray with the team?

When we pray together before a game, we do it right in the concourse of the Gentile [Arena], and they are just very serious when we pray. I never talk about [the losses] in our prayer because I don’t want them depressed in a way. So last week, after they had lost a game, I said, I think it is time for me to bless their hands. Each one came by me and put out their hands, and I made the sign of the cross on their hands and asked God to bless them.

Each one came by me and put out their hands, and I made the sign of the cross on their hands and asked God to bless them.

What do you want the players to know about who God is?

I want them to know that God plays an important part in their lives; and sometimes in my prayer with them, I say, “God loves every one of us, and each one out on that court is your brother; so no matter who it is, we are all creatures of God.”

What would you say to someone who might say to you, “Sister Jean, God doesn’t care about what happens in these games; there are more important things in sports that we should pray about.”

Oh, I think God does care. Maybe Jesus played baseball or basketball or soccer. I don’t know. Maybe [sports] had different names. I just think, I have such an idea of God...he knows everything that’s going on, and he knows we want to do this. If it is not his will, we’re not going to win.

So when you pray with team, you’re praying for them to win, right?

Does that mean you’re praying against the other team?

No, not really. I pray with the fans, and I pray for the other team, too. Sometimes I’ve had the opponents stop me in the concourse when I go work the crowd and they say to me, “Sister Jean, I notice you pray a little harder for Loyola.” And I say, “Well, if you wore maroon and gold, you would do that too.”

Why do you pray for the whole crowd before games?

I do it because, first of all, I just think that students need to hear about God. Even though they might not be practicing religion, I keep saying to parents who are worried about their children not going to Mass or other parents in other religions whose children are not going to their own church services: “Don’t worry about them, they’re going to come back. They’re going to find out that they need God, and so they’ll come back. I have great faith in them, and I have great faith in their church.”

Do you have any favorite prayers?

I make my morning meditation every day. I use the Gospel of the day for my meditation because I think it’s important that I follow a certain routine rather than just take a book and what somebody else has written. I just take what the Gospel stories have and think about it. Then I’m old fashioned in certain ways. I pray the rosary. Or I read a prayer every day that refreshes my own faith and my own trust and my own hope.

I did an interview with a fellow from CBS, Tim Doyle, where he pretended he was going to confession with me. He said, “Sister Jean, I know I’m not supposed to go to confession to you.” But he says, “I’m just kind of losing my faith in the Rambler team because they’ve lost two hard games.” I said: “You can’t lose faith. If you lose faith, then you’re going to lose hope; and if you lose both of those, you’re probably going to lose love as well.” I believe that. If we lose faith, then we don’t have hope. And if we lose two of those theological virtues, then the love is bound to go as well.

So, I have to ask: How far is Loyola going to make it this year?

I think it all depends on who’s in the brackets. The young men hope to go to the Final Four; that’s their goal. I could probably answer that question when the brackets are out.

Zac Davis is an associate editor of America.