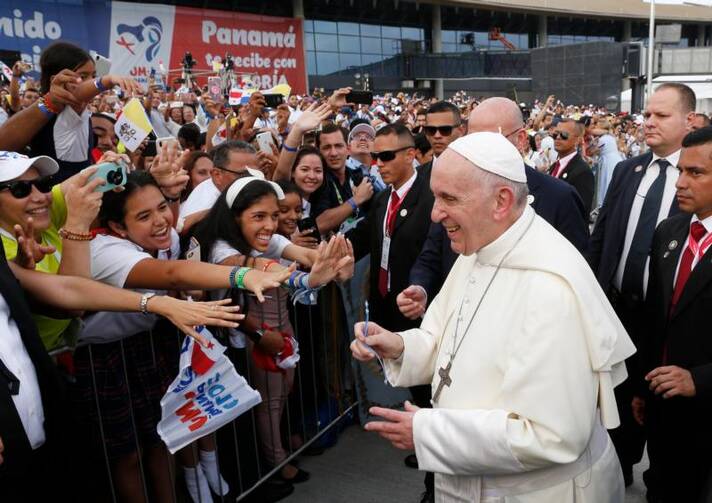 In a keynote talk that could have global relevance, Pope Francis on his second day in Panama called on the bishops of Central America to follow the example of St. Óscar Romero and “think with the church,” referring to St. Óscar Romero’s  episcopal motto, inscribed on his tombstone. It “clearly expresses the principle that guided his life as a pastor,” Pope Francis said.

“It was the compass for his life and fidelity,” the pope continued, “even in times of great turmoil.”

He described St. Óscar Romero as one of the “prophetic fruits of the church in Central America.” Pope Francis added, “His life and his teachings remain a constant source of inspiration for our churches and, in a special way, for us as bishops.”

Pope Francis expressed his joy at being able through the bishops “to embrace” the people of this region and to that “tested yet simple faith seen on the faces of your people, who, though poor, know that,” as St. Óscar Romero said, “God is here; he is not sleeping; he is active; he watches and helps.”

He remembered “the many men and women, priests, consecrated and lay,” who in Central America “devoted their lives and even shed their blood to keep the church’s prophetic voice alive in the face of injustice, the spread of poverty and the abuse of power.”

He reminded those present that when he was archbishop of San Salvador, St. Óscar Romero’s name “was a bad word.” He was “suspected and excommunicated in the private whispers of so many bishops.” But today, he said, “his legacy can become an active and life-giving witness for us, who are likewise called to the daily martyrdom of serving our people, and on it.”

“Romero instinctively knew how to understand and appreciate the church, because he loved her deeply as the wellspring of his faith,” he said. Indeed, “without this deep love, it would be difficult to understand the story of his conversion. It was that same love that led him to martyrdom.”

It was, he said, “a love born of receiving an utterly free gift” that “frees us from any pretension or temptation to think that we are its proprietors or its sole interpreters.” Francis reminded the bishops,  “we did not invent the church; she was not born with us and she will carry on without us.”

“Romero instinctively knew how to understand and appreciate the church, because he loved her deeply as the wellspring of his faith.”

During his address, Pope Francis noted the regional impact of migration, including its impact on policy to destination states in the north of the Americas. Last November, the Central American bishops issued a pastoral letter in which they pointed out that their region “has recently been affected by a new kind of migration, massive and organized.”

Recalling this, Francis said “the church, by virtue of her universality, can provide the fraternal hospitality and acceptance that can enable the communities of origin and of destination to dialogue and to help overcome fears and suspicions and thus to consolidate the very bonds that migrations—in the collective imagination—threaten to break.”

He said these situations “summon us to conversion, solidarity and decisive efforts to educate our communities. We cannot remain indifferent. Whereas the world discards people, as we are painfully aware, Christ’s kenosis,” Christ's self-emptying in His incarnation, “does not.”

“We have experienced this, and we continue to experience it in our own flesh through forgiveness and conversion,” the pope said.

He told the assembled bishops that World Youth Day “is a unique opportunity to go out to encounter and draw even closer to the experiences of our young people—so full of hope and desires, but also many hurts and scars.” With them, he said, “we can interpret our world in a new way and recognize the signs of the times.”

Pope Francis said young people “are like a barometer for knowing where we stand as a community and as a society.” He and said bishops “should be grateful to have young people concerned with the Gospel.” He encouraged them to promote programs and educational centers “that can accompany, support and empower your young people.”

He urged the bishops, perhaps thinking of the mortal reach of Central America’s gangs, to “snatch them from the streets before the culture of death can entice their young minds and sell them its smoke and mirrors or offer its chimerical ‘solutions’ to all their problems.” He told them to do this “not paternalistically, looking down from on high, because that is not what the Lord asks of us, but as true fathers and brothers to all.”

He reminded them, “Young people are the face of Christ for us, and we cannot reach Christ by descending from above, but by rising up from below,” as St. Óscar Romero made clear.

Pope Francis noted that “many young people have been taken in by easy answers that end up costing dearly”; they “find themselves boxed in and lacking opportunities, amid highly conflictual situations with no quick solution: domestic violence, the killing of women—our continent is experiencing a plague in this regard—armed gangs and criminals, drug trafficking, the sexual exploitation of minors and young people, and so on.”

At “the root” of many such situations, he noted, “often families have been broken by an economic system that did not prioritize persons and the common good, but made [financial and commodity] speculation its ‘paradise,’ without worrying about who would end up paying the price.” As a result, “we see our young people without a home, without a family, without a community, without a sense of belonging, easy prey to the first charlatan who comes along.”

Pope Francis said St. Óscar Romero’s “love, loyalty and gratitude brought him to embrace passionately, but also with hard work and study, the currents of renewal authoritatively proposed by the Second Vatican Council.”

Pope Francis said St. Óscar Romero’s “love, loyalty and gratitude brought him to embrace passionately, but also with hard work and study, the currents of renewal authoritatively proposed by the Second Vatican Council.” There, Romero “found a firm guide for Christian discipleship. He was neither an ideologue nor ideological; his actions were born of a thorough familiarity with the Council documents.”

In this light, Francis said, “thinking with the Church meant, for Romero, contemplating her as the People of God” because as Vatican II taught: “The Lord did not want to save us alone and apart from others, but to establish a people who would profess him truth and serve him in sanctity.”

He said Romero “carefully listened” to this people “ so as not to be deprived of the Spirit’s inspiration” and, in this way, he “showed us that the pastor, in order to seek and discover the Lord, must learn to listen to the heartbeat of his people” and must be “steeped in their joys and hopes, their sorrows and their anxieties” and to do so “to the point of identifying with them and discovering from them the will of God who calls us.”

He told the bishops, “It is important that we not be afraid to draw near and touch the wounds of our people, which are our wounds too, and to do this in the same way that the Lord himself does.”

He said this means “allowing this suffering to have an impact on our priorities and our preferences, on the use of our time and money, and even on our way of praying.”

Francis encouraged bishops to care especially for their priests. He recalled Archbishop Romero’s friendship with Rutilio Grande, S.J., and how much he was affected by Father Grande’s assassination. Romero “was no human resources manager; that was not how he dealt with individuals or organizations, but as a father, a friend and a brother.”

Today, he said, Romero “can serve as a yardstick, however daunting, to help us measure our own hearts as bishops and ask, ‘How much does the life of my priests affect me? How much do I let myself be impacted by what they experience, grieving when they suffer and celebrating their joys?’”

He emphasized that “the outcome of our pastoral work, evangelization and mission” depends “on the centrality of compassion” which “is one of the unique things that we as church can offer our brothers and sisters. Christ’s kenosis is the supreme expression of the Father’s compassion. Christ’s church is the church of compassion, and that begins at home.”

He told the bishops that “thinking with the church means thinking with our faithful people, the suffering and hope-filled people of God.” He warned against “spiritual worldliness, which puts a religious and ‘pious’ veneer over the desire for power and influence, over vanity and even pride and arrogance.

He reminded them that St. Óscar Romero said that “a church that does not want her strength to be in the backing of the powerful or political leaders but advances with noble detachment, relying only on the true strength born of the embrace of the crucified Jesus.”

He said St. Óscar Romero’s example “calls us to examine our consciences about our decisions and priorities in the use of our resources, influence and position.”

Thank you for these very timely reflections,

I have one correction to this article which is important: Archbishop Romero's motto was "to feel with the Church" not to "think" with the Church. For me the distinction is important--he calls us to move out of our heads and theoretical living into lives of empathy and compassion toward all who suffer, especially God's poor ones...

I saw the movie about Óscar Romero when I was a student. Raul Julia gave a very moving performance, especially the scene where he says I get down on my knees and beg you then rise up far above you and order you: Stop the Repression!

St. Óscar Romero - Pray for us.