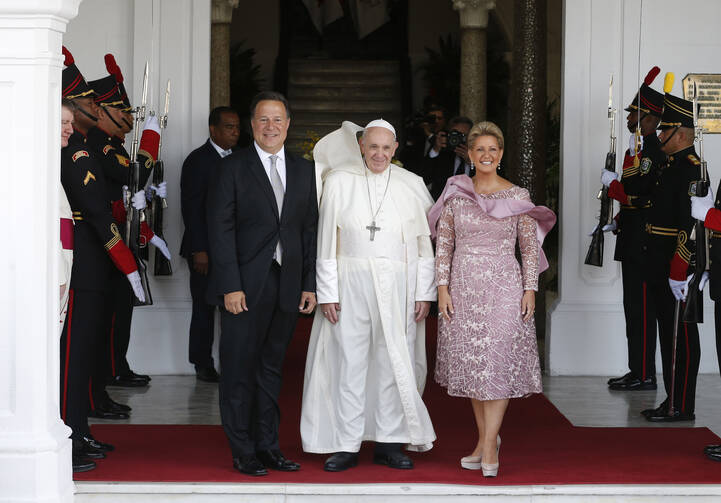 Pope Francis is receiving a rapturous welcome here in Panama. The government has declared three days of holiday, and the local people are running out on the streets to catch a glimpse of him. The local television and radio stations are giving blanket coverage to his visit, and the presence of more than 180,000 young people from 155 countries (including around 8,000 from the United States) is creating a festive atmosphere conveying the joy and unitive power of the Gospel.

But the big news in the region, as he arrived in Panama, came from nearby Venezuela, where the president of the National Assembly, Juan Guaido, declared himself interim president and was immediately recognized by many countries as such, including the United States. Before this happened, the Vatican let it be known that it is working in close harmony with the Venezuelan bishops and that it attended the presidential inauguration of Nicolás Maduro—at the level of chargé d'affaires—in an effort to keep the door open with Venezuelan leadership.

Holy See diplomats hope to facilitate a possible dialogue for reconciliation in the future. It is worth noting that Archbishop Penna Para, the number three ranking official in the Vatican, is from Venezuela and is accompanying the pope on this trip. It remains to be seen if Francis will say anything about the dramatic situation in Venezuela or if he prefers to abstain from commenting in the hope of being able to contribute to peace and reconciliation in that country at this tense moment.

Pope Francis said nothing about Venezuela this morning, thought the Holy See later issued a brief statement responding to the questions of several journalists. The director “ad interim” of the Press Office of the Holy See, Alessandro Gisotti, said: “In Panama, the Holy Father has been informed of the news coming from Venezuela and is closely following the situation as it evolves. He is praying for the victims and for all the people of Venezuela. The Holy See supports all efforts that help save the population from further suffering."

In his first public address at the presidential palace to an audience of 700 people, representing the civic, political and religious authorities of the country, as well as the diplomatic corps, the pope told them and those watching on television, “In these days, Panama will not only be spoken of as a regional center or strategic site for commerce or the transit of persons: it will turn into a hub of hope.”

In his speech, he told them and those watching on television, “In these days, Panama will not only be spoken of as a regional center or strategic site for commerce or the transit of persons: it will turn into a hub of hope.”

Panama’s President, Juan Carlos Varela Rodriguez, gave Pope Francis a very warm state welcome at the Presidential Palace located on the site of the original 1673 building. He welcomed him to this land “of peace and dialogue.”

He recalled how the first evangelization of Panama, and that the first Jesuit, Father Jerónimo Ruiz del Portillo, came here 450 years ago. He added, “I received my education from the Jesuits, which has enabled me to be here with you today, a Jesuit and Latin American Holy Father, for this global event.”

The president also praised “the work of the Catholic church and the religious orders...which have left a marvelous legacy both in attention to the most needy persons and the sick, as well as in the field of education.” He went on to praise Francis for his work for peace, harmony and reconciliation in the world and his advocacy for those on the margins of society.

Speaking after the president, Pope Francis thanked the authorities and the nation “for opening the door of your home” to him and to the young people of World Youth Day and said today Panama has become “a meeting-point where young people coming from the five continents, brimming with dreams and hopes, will celebrate, meet one another, pray and kindle their desire and commitment to building a more humane world.”

The president also praised “the work of the Catholic church and the religious orders...which have left a marvelous legacy both in attention to the most needy persons and the sick, as well as in the field of education.

He said these young people “defy the shortsighted and short-term views that, seduced by resignation or greed, or prey to the technocratic paradigm, believe that the only way forward is to obey the ‘laws of competition and the survival of the fittest, where the powerful feed upon the powerless’.” Because, he said, “to believe that would be to close the future to a new imagination of humanity.”

By welcoming them, he said, “Panama becomes once more a land of dreams that challenges so many certainties of our time and opens up vital horizons that can enrich the path ahead through a respectful and compassionate gaze upon others.”

Francis, who arrived in Panama on Jan. 23 and will remain until Sunday evening, Jan. 28, explained that at this World Youth Day “we will witness the opening of new channels of communication and understanding, of solidarity, creativity and mutual assistance; channels of humanity that foster commitment and break through anonymity and isolation, for the sake of a new way of building history.”

Many of the 180 million people who live in Central America are suffering from political conflicts, violence, corruption and great poverty that cause much emigration. In his speech, Francis sought to encourage them by affirming that “another world is possible!” He said the young people gathered in Panama “urge us to take our part in building it, so that our dreams do not remain ephemeral or ethereal, but can promote a social contract in which everyone has the chance to dream of a tomorrow.”

“The right to the future is also a human right,” Francis said. He recalled that—as the president had mentioned in his speech—in a building near where he was speaking, South America’s great liberator Simon Bolivar “convoked the leaders of his time to forge the dream of the unification of the Great Fatherland” that can include a “respect” and an “embrace” of the “multicultural richness of each people and culture.”

Drawing on this historical event, Francis called Panama “a land of convocation and of dreams,” not only in the past but also today with W.Y.D. Thanks to its privileged location, he said the country is “a strategic enclave not only for the region but also for the entire world. A bridge between oceans and a natural land of encounter.”

“Panama becomes once more a land of dreams that challenges so many certainties of our time and opens up vital horizons that can enrich the path ahead through a respectful and compassionate gaze upon others.”

While Panama is the narrowest country of the entire American continent, he said it stands as “the symbol of the sustainability born of the ability to create bonds and alliances”

“This capacity shapes the heart of the Panamanian people,” Pope Francis said.

He told its citizens, “Each of you has a special place in the building of the nation and is called to ensure that this land can live up to its vocation to be a land of convocation and encounter.” He said this involves “decision, commitment and daily effort to ensure that all have the opportunity to feel that they are agents of their own destiny and that of their families and the entire nation.”

Then, in what could be understood not only as a message to the Panamanian authorities, but also to those of the countries of the region—especially Nicaragua, Honduras, Guatemala, El Salvador, but also neighboring states like Colombia and Venezuela—Pope Francis said, “It is impossible to think of the future of a society without the active—and not merely nominal—participation of each of its members, in such a way that his or her dignity is acknowledged and guaranteed through access to quality education and the promotion of dignified jobs.”

He emphasized that education and dignified work “help make it possible to recognize and appreciate the genius and the creative dynamism of this people.” They are, he said, “the best antidote to any type of ‘guardianship’ that would restrict your freedom and subordinate or ignore the dignity of citizens, especially that of the most poor.”

Referring to Panama, he said, “the genius of these lands is marked by the richness of its indigenous peoples: the Bribri, Bugle, Emberá, Kuna, Nasoteribe, Ngäbe and Waunana, who have so much to relate and recall from their culture and vision of the world.” He extended his greeting to them, and called on the authorities to “work to build a future of hope” with them and the other peoples of this land.

Pope Francis reminded the authorities here and elsewhere in the region that “it is possible to defend the common good above the interests of a few or for few only when there is a firm decision to share with justice one’s goods.”

He reminded governments in this region that “the younger generation, with its joy and enthusiasm, with its freedom, sensitivity and critical capacity, demands that adults and especially all those who exercise roles of leadership in public life, lead a life consonant with the dignity and authority that they possess and that has been entrusted to them.”

Young people, he said, “call upon them to live in simplicity and transparency, with a clear sense of responsibility for others and for our world” and “to lead a life that demonstrates that public service is a synonym of honesty and justice, and opposed to all forms of corruption.”

He told them that “young people demand a commitment in which all—beginning with those of us who call ourselves Christians—have the audacity to build ‘an authentically human politics’ that makes the person the center and heart of everything. A politics that works to build a culture of greater transparency between governments, the private sector and the entire population.”

“May Our Lady, Santa Maria La Antigua, bless and protect Panama,” he said, concluding his remarks.

This story has been updated with the Holy See statement on Venezuela.

Reports are that Maduro is being run from Cuba and Teheran. Vatican endorsed Maduro only a month ago. Venezuela gold is being sent to Turkey and part is coming back as food from Islamic charities.

American press has been ignoring Venezuela. It doesn't fit the narrative they want. Pompeo will address it this afternoon.

Youth - they are blessed with energy, dynamism, and hope.