Sex Abuse Crisis: What dioceses have released names (so far)? 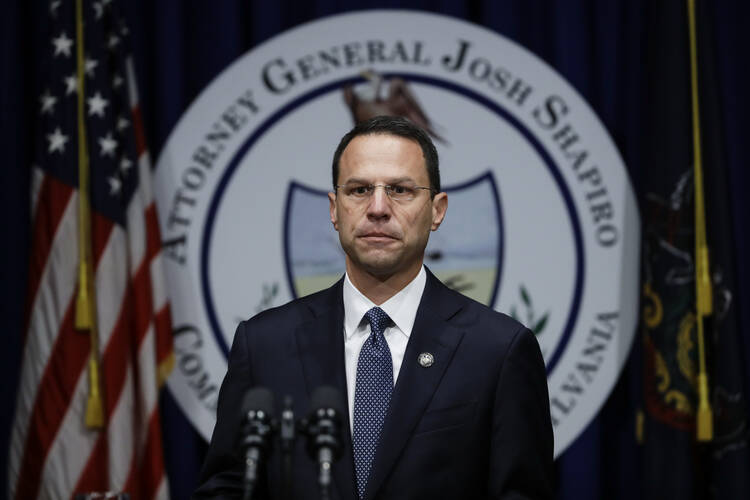 Pennsylvania Attorney General Josh Shapiro walks to the podium to speak about a grand jury's report on clergy abuse in the Roman Catholic Church during a news conference at the Capitol in Harrisburg, Pa. (AP Photo/Matt Rourke, File)

PHILADELPHIA (AP) — Over the past four months, Roman Catholic dioceses across the U.S. have released the names of more than 1,000 priests and others accused of sexually abusing children in an unprecedented public reckoning spurred at least in part by a shocking grand jury investigation in Pennsylvania, an Associated Press review has found.

Nearly 50 dioceses and religious orders have publicly identified child-molesting priests in the wake of the Pennsylvania report issued in mid-August, and 55 more have announced plans to do the same over the next few months, the AP found. Together they account for more than half of the nation's 187 dioceses.

The review also found that nearly 20 local, state or federal investigations, either criminal or civil, have been launched since the release of the grand jury findings. Those investigations could lead to more names and more damning accusations, as well as fines against dioceses and court-ordered safety measures.

Nearly 50 dioceses and religious orders have publicly identified child-molesting priests in the wake of the Pennsylvania report issued in mid-August.

"People saw what happened in these parishes in Pennsylvania and said, 'That happened in my parish too.' They could see the immediate connection, and they are demanding the same accounting," said Tim Lennon, national president of the board of the Survivors Network of those Abused by Priests, or SNAP.

The recently disclosed accusations date back six or seven decades in some cases, with the oldest from the 1910s in Louisiana. Most of the priests were long ago removed from ministry. An AP examination found that more than 60 percent are dead. In most cases, the statute of limitations for bringing criminal charges or suing has run out.

Nevertheless, advocates say exposing molesters nearly two decades after the scandal first erupted in Boston in 2002 is an encouraging step, in part because it gives some victims a sense of vindication after decades of official silence or denials. Also, it could increase pressure on dioceses to set up victims' compensation funds, as the church has done in Pennsylvania already. And it could result in the removal of molesters from positions outside the church that give them access to children.

"This is a milestone. We are getting closer and closer to what this ought to be, the true coming to terms that would have to be at a national level," said Joe McLean, who filed a lawsuit with other victims seeking to compel the U.S. Conference of Catholic Bishops to release files on alleged abusers nationwide.

The Pennsylvania investigation , led by state Attorney General Josh Shapiro, identified nearly 300 "predator priests" dating back seven decades and accused church leaders of covering up for the abuses, in some cases by returning priests to duty after short stays in treatment centers or reassigning them. Advocates said the report had big impact because it was the largest to date in scope, encompassing most of the state.

Victims' advocates and others, including some church officials, said the report was largely responsible for the urgency now being shown by the church. Many bishops cited those findings and other scandals — including the resignation over the summer of Washington Archbishop Theodore McCarrick, accused of groping an altar boy in the 1970s — in their letters to their congregations.

The biggest list of names has come from the Jesuits West Province, a religious order that encompasses nine Western states. It identified 111 priests. The New Orleans Archdiocese and the Diocese of Syracuse, New York, named 61 and 57 respectively. The Great Falls-Billings, Montana, Diocese disclosed 47 names, including those of a few nuns, while the Los Angeles Archdiocese reported more than 50 from the past decade or so.

The biggest list of names has come from the Jesuits West Province, a religious order that encompasses nine Western states.

Some dioceses, like Peoria, Illinois, released only names with no information on the allegations or the church's response. Others detailed such things as parish assignments, numbers and dates of allegations — including an Omaha priest with 20 to 35 accusations against him — and attempts at treatment, restriction and punishment.

And more names could be coming in places where attorneys general have launched statewide investigations such as New Jersey, New York, Nebraska, Florida and Delaware, or in cities like Houston or Cheyenne, Wyoming, where local prosecutors are looking into individual priests.

No, homosexuality is not a risk factor for the sexual abuse of children
Thomas G. Plante

In his Christmas address last month, Pope Francis made an unprecedented call for priests who had abused children to turn themselves in and vowed the church will "never again" hide their crimes. The world's bishops will hold a summit at the Vatican next month to forge a comprehensive response to the crisis.

The U.S. bishops adopted new reporting procedures and other reforms after the furor in Boston but held off on any further measures recently at the direction of the Vatican. The bishops are holding a retreat outside Chicago starting Wednesday for "prayer and reflection" upon the scandal. Messages left by the AP seeking comment from conference officials were not returned.

In the 16 years between the Boston scandal and the Pennsylvania investigation, only about 30 dioceses around the country had released lists of priests they deemed credibly accused of abuse. Most of those dioceses came clean because they were forced to do so by lawsuits or bankruptcy filings. Some dioceses declined to name any deceased priests, since they could not defend themselves, and some would not identify any clergy members at all.

Now, 13 dioceses have hired outside consultants including FBI agents and former judges to review their files, and dioceses that had previously been secretive are coordinating to release statewide lists in such places as Texas and New Jersey.

Bishop Anthony B. Taylor of the Little Rock Diocese in Arkansas disclosed the names of 12 priests in September and announced the hiring of a consultant to review diocesan files.

"The Pennsylvania grand jury report kind of helped us firm up our decision to move forward with what we were doing. It affected the timing rather than the decision," Taylor said.

In October, the pope accepted the resignation of Cardinal Donald Wuerl, archbishop of Washington, D.C., after he was accused in the report of mishandling some allegations of abuse against priests and others while bishop of Pittsburgh from 1988 to 2006.

The report is also credited with spurring an uptick in victims contacting support networks or law enforcement. Pennsylvania's clergy abuse hotline has received more than 1,400 new allegations since August, and Lennon said there has been a dramatic increase in victims reaching out to SNAP.

While praising the release of names, many experts said the lists are often incomplete. Terence McKiernan, co-director of BishopAccountability.org, which has tracked abuse for more than a decade, said many dioceses have left off names of known abusers his group has published in its online database.

I do not believe that the church is capable of policing itself though. They need outside forces, ideally law enforcement, to hold them accountable.

"It's not enough," agreed Pennsylvania's Shapiro. "I do not believe that the church is capable of policing itself though. They need outside forces, ideally law enforcement, to hold them accountable."

Shapiro said he has spoken to 45 other attorneys general since his report, and 14 have publicly acknowledged some form of investigation. Other investigations have become public because of dioceses acknowledging subpoenas, reporters documenting raids or state agencies advertising victim hotlines.

Illinois Attorney General Lisa Madigan printed a copy of the Pennsylvania report the day it came out. In mid-December, she issued a blistering preliminary report saying a review of church files showed dioceses in Illinois had withheld the names of at least 500 clergy accused of sexually abusing children.

"It was obvious that this type of concealment, this type of unresolved action in Pennsylvania, that we were going to find the same thing in Illinois," Madigan said.

What about a diocese like Steubenville that included a name on its list without full details, like the allegation was investigated and went before a grand jury which found no probable cause to the allegation, yet the diocese felt the prosecutor and the grand jury did a sub-standard job and conducted their own kangaroo tribunal to overturn the civil investigation. In this case, Steubenville is telling Shapiro that a diocese can do a better job. Either Steubenville is right or the grand jury is right. You cannot have it both ways. It is time for Jeff Monforton to right a wrong.