Responding to sexual abuse will take years—and it should 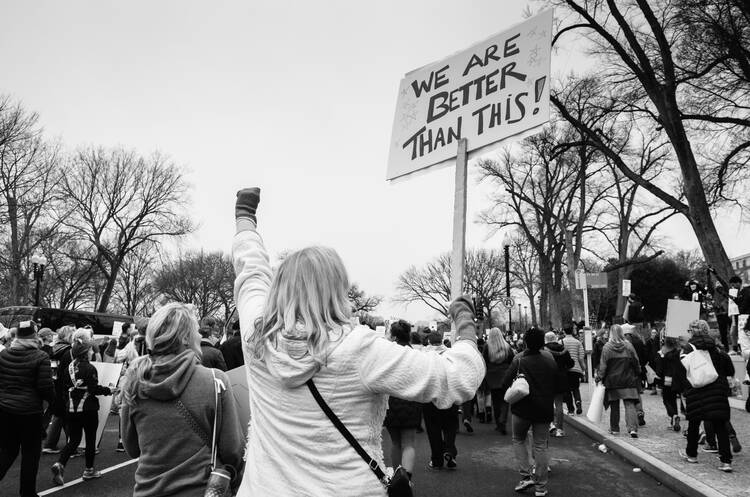 A protestor demonstrates during the Women’s March on Washington, DC on January 21, 2017. (Photo: Jerry Kiesewetter/Unsplash)

The flood of revelations about sexual harassment and assault, whether in Washington or Hollywood, is unlikely to stop anytime soon. The walls of denial built up by position and self-protective ignorance have been breached. If the tragic revelations of the Catholic Church’s sex abuse crisis are any guide, the process of reckoning with problems that have been avoided for decades will itself take decades.

Neither the church as a whole nor the editors of this review are in a position to prescribe a comprehensive remedy for the systemic patterns of harassment, abuse and denial. But there are pitfalls to be avoided and small measures of hope to be encouraged, and the church’s experience has some lessons to offer.

The process of reckoning with problems that have been avoided for decades will itself take decades.

The first lesson is that the voices of the victims must be heard. The attention of media and society too easily turns to parsing the harassers’ and abusers’ excuses and apologies while simultaneously calling for their exile from public life and for policy changes that might have prevented their abusing in the first place. Senator Mitch McConnell, responding to the accusations against Roy Moore in Alabama on Nov. 13, joined calls for Mr. Moore to withdraw from his Senate race. Where many others had hedged their criticisms with “if these accusations are true,” Mr. McConnell said squarely, “I believe the women, yes.” While surely Mr. McConnell is not completely ignoring political risks and benefits, his clear attention to the voices of the women who have accused Mr. Moore is significant.

The second lesson is that while some form of social and professional exclusion may be a necessary first step in redressing the damage done by harassers and abusers, it is not by itself a sufficient response. The swift firing or ostracizing of abusers does not absolve institutions or communities of their collective responsibility, whether they were complicit in covering up abuse or merely ignorant of its prevalence.

The Puritan impulse to cast out the evildoer as the sole response to his transgression seeks catharsis rather than justice. Justice requires not only that past and future victims be made whole and safe but also that the structures that protect the privileged rather than the powerless be reformed. And justice also recognizes and encourages the possibility of redemption, after repentance and penalty.

The church still needs to learn and relearn how to listen to victims. It also must face the reality of sexual harassment, alongside the problem of the sexual abuse of children it has painfully learned to acknowledge. But its experience offers evidence that it is possible to begin turning even an organization as large and as old as the church toward primary concern for victims. As painful as these most recent revelations of abuse and harassment are, they are even more necessary.

The Editors have regrettably missed a valuable opportunity here to highlight the missing link: the sexual abuse of women and men by catholic clerics in and across the global catholic church. This phenomenon is yet to be properly recognised, admitted, written about, studied and acted upon. Lone voices are crying in the wilderness on this with marginal effect. Until clerical spiritualised sexual power abuse of lay people is recognised we remain still with lone voices, lone civil court cases, lone criminal court cases, which will though continue as costly but necessary piecemeal attempts to achieve recognition of this issue.

Jennifer is absolutely correct. What has happened since the incredible findings featured in Spotlight film? Nothing much to report in the way of progress. A few Committees which did include some victims, who dishearteningly left for lack of action.

It is time to look to a root cause: The wide spread out break of abuse in the Church is systemic to the structure of the Seminary. It requires a total revision. It is inherently flawed. The men enter into a system which is void of any feminine influence. Wither as instructors or as candidates. This cuts off a much needed presence of the feminine psychic. It also contributes to an unrealistic view of life. Not to mention the matter of justice. Of course we could hope that the basic psychology and healthy awareness and attitude of sexual maturity is now being more throroughtly vetted.

Unbelievable!
"Neither the church as a whole nor the editors of this review are in a position to prescribe a comprehensive remedy for the systemic patterns of harassment, abuse and denial."
So who else is there?
Sexual misbehavior is ancient, comprehensive and contemporary and the bulwark against a practicing society has been the Christian Faith. To either disown the subject or call the problem too great is a disservice in the extreme.
It is time the Catholic Church got real and spoke the truth - even if it is left with a few. Get off the political platform and get into scripture - maybe the light will begin to shine.

I agree that the Catholic church’s handling of its sex abuse scandal offers powerful lessons to other institutions whose members have committed sex crimes. Sadly, these are, for the most part, lessons of how not to respond. The church could learn much from how some corporations are dealing with employees who have been credibly accused of abuse. Corporations, for example, seem much more willing than the church to expel abusers. How many pedophile priests have been excommunicated? God will forgive anyone who sincerely repents, but that doesn’t mean that a cleric who rapes children should be permitted to remain a member of the church. The church’s failure to expel abusers has resulted in it not being a safe space for victims, which, in turn, has led many victims and those who stand in solidarity with them to leave. I pray that someday the church will adopt a real zero tolerance policy.

I am grateful to "America" for printing this, and similar articles on the subject. The "America" articles help me stay connected by a thread with my Catholic heritage. As a disgusted, former Catholic, I seldom attend Mass, but continue my relationship with Jesus Christ. My local parish advertised a "Catholics Come Home" program, so I attended one session. They said the first thing the assembly would have to do is confess our sins for staying away. I don't think I've sinned, so going to confession would lack truth. Nowhere within the "come home" meeting was the Church's failure to explain, or apologize for the COVERUP mentioned. No! I'm not confessing for the Sins of the Church. I suspect there are thousands of former Catholics who share my feelings.

I think the hierarchical top-down power structure in the Church is what allowed (and allows) abuse and abusers to continue for decades. When there is so little feedback from and no authority or accountability to the parish, it's easy for the diocese to ignore complaints or simply to move priests and parishes have no recourse. I've seen it happen locally with other forms of abuse and misconduct and now see the wisdom in Protestant churches in having at least some accountability of the pastor to the congregation.

Probably the most ironic or should we call it the most hypocritical incident was Charlie Rose interviewing Kevin Spacey about there is really no there there on Bill Clinton's behavior.

The conventional wisdom on was is going on is that this is the first step in another attempt to take Trump out since the Russia collusion story has proved a farce and the race/white supremacy meme seems to be gong nowhere. But first the Clinton's had to go to clear the decks to go after Trump, It was meant to be a twofer (getting rid of both the Clintons who are no longer useful for the left and Trump) but there is a lot of collateral damage going on.

Richard Fernandez, a political commentator, said, they put these torpedoes in the water to take out Trump, but now they’ve circled back around.

For that matter, having Bill Clinton as a featured speaker at the DNC last year surely looks ironic now. Hillary was his greatest enabler, as she ran defense for him against the many women he had abused.