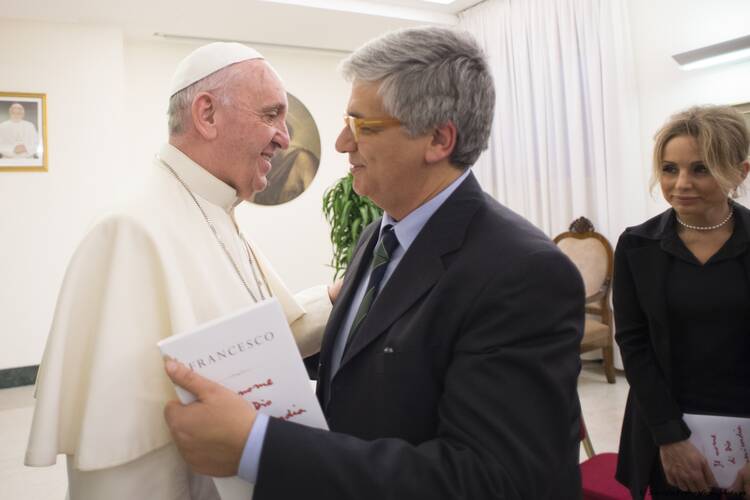 Pope Francis greets Italian journalist Andrea Tornielli during a meeting with people involved in the publication of "The Name of God Is Mercy," featuring an interview the pope did with Tornielli. (CNS photo/L'Osservatore Romano, handout)

“These appointments are two important steps in the process of reform of the Vatican media which the Holy Father has entrusted to me some months ago,” Paolo Ruffini, the prefect of the dicastery and also a married layman, said in a statement issued by the Vatican today.

These appointments are two important steps in the process of reform of the Vatican media.

Pope Francis has appointed Andrea Tornielli, coordinator of Vatican Insider, as director of the editorial board of Vatican media. At the same time, Pope Francis has named Andrea Monda as the new editor in chief of L’Osservatore Romano, the Vatican daily news publication, and accepted the resignation of Giovanni Maria Vian, who held the post for the past eleven years.

Mr. Tornielli, 54, is a well known Italian journalist and the coordinator of Vatican Insider. His new post was envisaged in a reform of that department, but until now it was unfilled.

Mr. Tornielli will have “the important role of coordinating the editorial line of all the Vatican media,” Dr. Ruffini said.

Born in Chioggia, in the Veneto region of Italy, in 1964, Andrea Tornielli graduated from the University of Pisa with a degree in the history of the Greek language. Married and father of three children, he started his journalistic career with the Italian edition of the Trenta Giorni (Thirty Days) monthly magazine (1992 to 96), and then the Italian daily, Il Giornale (1996 to 2011). In 2011, he joined La Stampa, and was coordinator of the paper’s website “Vatican Insider.”

In a comment to Vatican media after his appointment, Mr. Tornielli, author of some 50 books including an interview book with Pope Francis on Mercy, said, “these media” which are translated into different languages “continue to transmit the message of the Successors of Peter and to give voice to those who have no voice.” He added that he was “more convinced than ever of the need for a journalism that gives the facts before commenting on them.”

Andrea Monda, 52, a married man and father, was born in Rome in 1966. After graduating in law from Rome’s La Sapienza University, Mr. Monda also obtained a degree in Religious Sciences from the Jesuit-run Pontifical Gregorian University. After working in the Rome city administration for some years, he has taught courses on Christianity and Literature at the Gregorian and Lateran universities.

Mr. Monda has worked as a journalist for some 30 years covering questions in the religious and cultural field and has, among other things, written for La Civiltà Cattolica and Avvenire, the Italian Catholic daily, and has experience in the television world. Together with his students, he wrote the meditations for the Via Crucis at the Colosseum for Good Friday, 2018.

Mr. Monda wants to ensure that the Vatican daily is what Paul VI wished it to be, namely “a paper of ideas, not only one that communicates news but also creates thinking.”

More men in the vatican- what a shakedown! Who cares! Let me know when you add married women in the place of these married men. Better yet, let me know when you add married female ordained priests to this position. I have no desire to see married laymen or deacons get puffed up so that we can continue to abuse the humanity of all women in our church.

Apparently, all women must leave Catholicism or all real Christians must protest every ordination, especially now deacon ordinations as this is the new device to push gender segregation forward, in order to finally see the Catholic Hierarchy act like anything Christ would not thoroughly rebuke for its extreme need to put misogyny above all else.