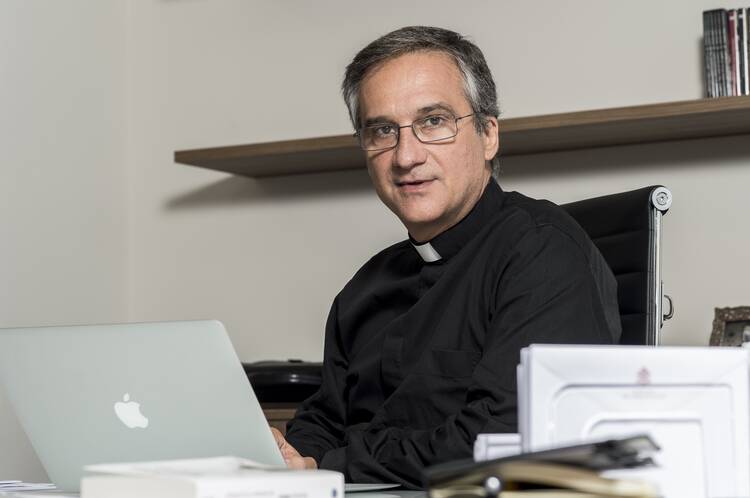 The reform of the Vatican’s communications system is well under way through a process of reorganization, rationalization and modernization. It will reach a significant milestone in 2018, according to Msgr. Dario Edoardo Viganò, the head of the new Secretariat for Communication, when the last of the Vatican’s various media entities will be incorporated under the secretariat.

The friendly, dynamic Italian monsignor, 54, who was born and lived the first 10 years of his life in Rio de Janeiro, discussed this reform in an exclusive interview with America. The need to rethink the Vatican’s entire communications system and develop a more strategic approach was identified in the 1990s, but it never happened because of the Great Jubilee in 2000, John Paul II’s illness and Benedict XVI’s “rather complex relation with the media, that culminated in Vatileaks.”

“This modernization is happening very late in the day,” he admitted. “We’re not building an ideal operation; we’re starting from existing structures that were operating on paradigms dating back at least 30 years, and we’re aiming at the best possible result, not the optimal one.

“We are now building a central content hub,” following the “Disney business model.”

“It’s one thing to start from scratch; it’s another to re-structure what is already there,” Msgr. Viganò said. His plan for the modernization of Vatican communications “reduced the number of structures but kept the services.” A gradual approach to reform has been adopted because of the number of entities that had to be incorporated into the revitalized communications effort.

Msgr. Viganò had been the C.E.O. of the Vatican Television Centre (CTV) for three years when Francis tapped him to be prefect of the new secretariat in June 2015.

As the secretariat’s prefect, he is responsible for the 650 persons employed in the different structures of the communications system that are in the process of being unified in the secretariat. More than half of them are non-Italian and come from some 40 other countries. Many are married with families.

The majority work in Vatican Radio. Because of the reorganization and unification with CTV, retraining for new roles and formation to enhance the quality of work has begun.

“We will continue on this path since people are the greatest good, the greatest resources we have,” he said. “Their formation is very important.”

He considers it a positive sign that more employees are requesting formation courses but admits “not everyone is enthusiastic.

“There is some anxiety regarding the changes, and there is some resistance, too,” Msgr. Viganò said, “despite having spent hundreds of hours in meetings trying to explain what is happening.” Some of that anxiety should be assuaged by the pope’s decree that no staff should be laid off during the reorganization.

The new secretariat was launched in June 2015. Over the next six months, the Vatican Press Office, the Pontifical Council for Social Communications and the Vatican Information Services were incorporated into it.

Vatican Radio and the Vatican Television Centre (CTV) were next incorporated into the secretariat, and by 2018 the Holy See’s four remaining communications entities will be rolled in: L’Osservatore Romano and the Vatican’s photographic services, printing press and publishing house. The secretariat is also responsible for the Holy See’s institutional website and the pope’s Twitter account, @Pontifex.

Soon after he was elected to lead the church, Pope Francis sought internal and external input from Vatican departments, media consultants and a commission headed by Lord Christopher Patten (former governor of the BBC) to begin a process of reforming Vatican communications. He next set up another group under Msgr. Viganò to produce an implementation plan based on that input, which the Council of Nine cardinal advisors approved.

The reform now underway is based on this plan and is guided by three principles, he said. First, the “theological pastoral” principle: “Christianity is not an idea,” Msgr. Viganò said. “It is an experience within a people in a given land and must relate to the cultural, social and communicative context in which it finds itself. And since today the system of communication is strongly digital, it must connect to that.”

The second principle guiding the new secretariat is apostolic and simple: “Pope Francis wants to bring the Gospel to the whole world.” The third principle demands “great care in the management of economic resources.”

Msgr. Viganò emphasized that the secretariat is particularly attentive to how money is managed and has already saved the Holy See three million euros. It made a significant saving (with an added ecological benefit) by ending the practice of printing the daily press bulletin, sending it to journalists by email instead. “It’s not just a case of reducing costs,” Msgr. Viganò said. “It also means adhering to the concept of subsidiarity that is part of the social doctrine of the church.”

Over recent decades, he said, “the local churches have developed their own communication structures, and we must interact with them in a subsidiary way and never substitute for them. We must assist them in whatever way we can so they can do their work well.”

Msgr. Viganò has direct responsibility for the secretariat’s editorial division, where he said, “we are now building a central content hub,” following the “Disney business model” of producing content that can be shared by different communications outlets and delivered across multiple platforms. “Some smiled at the idea of this model, but we believe it offers a very useful and practical way of operation which could be implemented here,” he said.

The content hub will oversee the shared production of general news and media content and the editing operation for the main languages. “We hope that by Easter we will have one new portal for all these different operations, with new software for the multi-media platform that will have texts, images, video and [digital audio] news, as well as podcasts.”

A unified translation unit is not yet on the secretariat’s agenda, but its resources will be pooled in the new unified structure to ensure rapid translations of all major documents. He adds that these rapid translations will include Chinese and Arabic given their increasing importance to the mission of the church.

He emphasized that the only “official translations” of the pope’s discourses are those that will be issued from the Secretariat of State.

The secretariat’s technological division is responsible for the integrated management of the platforms and the technological services necessary for its communication activities. It is also tasked with the research and development of new services and keeping abreast of global technological updates. It will be responsible for “live productions” of all papal events from Vatican territory.

These are “exclusive” to Vatican Radio and Television, but a feed will be provided to the international media, Msgr. Viganò said. He knows much about this effort from his days as head of CTV. He gained international fame then for directing the filming of Benedict XVI’s departure from the Vatican in February 2013.

The secretariat’s press office is the public face of the Vatican to the world, responsible for distributing official communications regarding the pope and the Holy See’s activities.

Pope Francis in preface to new book: The church must be 'extremely severe' with pedophile priests
Gerard O’Connell

According to Msgr. Viganò, the Vatican spokesperson, Greg Burke, and his deputy, Paloma Garcia Ovejero, “are always available.” He said the appointment of a layman and—for the first time ever—a laywoman as spokespersons for the Holy See is “a qualitative leap.”

Both speak English and Spanish, the languages spoken by 80 percent of the Catholic world.

Seeking to boost its capacity, Msgr. Viganò has assigned the press office extra staff; it now has 22 employees. The office, which used to close at 2 p.m. Rome time, has extended the hours during which it will respond to media inquiries by an additional five hours. He hopes eventually to extend this service even later, to 10 p.m. Rome time, “to respond to the needs of those across the ocean.”

But he does not envisage a 24/7 coverage. That “would be ideal, but it’s not possible now due to limited resources.”