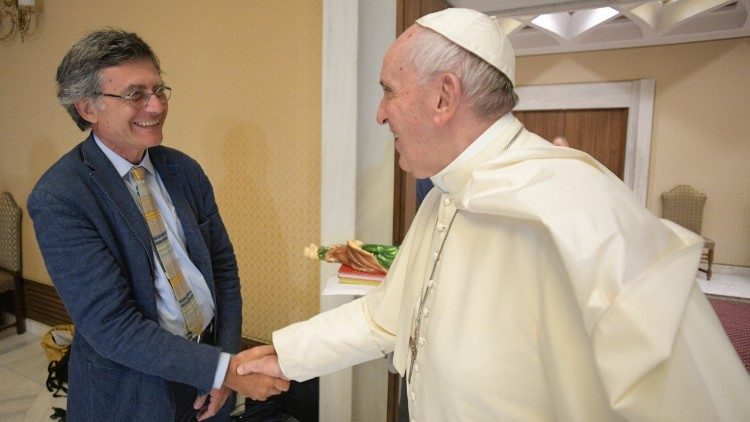 Italian journalist Paolo Ruffini, shown here with Pope Francis, has been named the new prefect for the Vatican Dicastery for Communication (Vatican Media).

Pope Francis has appointed Paolo Ruffini, 61, an Italian layperson with wide experience in print, radio and television, as the new prefect of the Vatican’s Dicastery for Communication. The first layperson to lead a major department at the Vatican, Mr. Ruffini is expected to start his new position in September.

Highly regarded by his peers for his professionalism and human relations, Mr. Ruffini previously worked as director of TV2000, the television channel of the Italian Bishops’ Conference. Born in Palermo, Sicily, on October 4, 1956, Mr. Ruffini (a relative of the late Cardinal Ernesto Ruffini, the archbishop of Palermo from 1945 until his death in 1967) received his law degree from La Sapienza University in Rome in 1979 before moving into journalism. He married in 1986.

He has received many awards in Italy for his journalism and has participated in numerous conferences on the role that Christians play in the communications field, as well as on the importance of ethics in the media.

With Paolo Ruffini’s appointment, Pope Francis continues his efforts to diversify the Roman Curia by appointing laypersons to whatever roles are possible.

As head of the Dicastery for Communication, the largest Vatican department in terms of personnel, Mr. Ruffini will oversee a staff of more than 600 people from 40 countries. The dicastery (until recently called a secretariat) has been radically reconstituted by Pope Francis in a series of reforms that began in 2015 and will be concluded by the end of this year with the incorporation of the Vatican daily newspaper L’Osservatore Romano and the Vatican printing press into the dicastery. As of Jan. 1, 2019, all the Vatican’s media operations will be under one structure, including a news hub, television, radio, daily newspaper, printing press, publishing house, photographic service and the Holy See Press Office.

Father James Martin appointed by Pope Francis to Vatican department for communications
Ashley McKinless
Mr. Ruffini succeeds Msgr. Dario Vigano, who was appointed as prefect of the newly established Secretariat for Communication in June 2015 but resigned on March 21 of this year after a major communications blunder in the handling of a letter from Pope Emeritus Benedict XVI during the launch of an 11-book series on “The Theology of Pope Francis,” by the Vatican publishing house, Libreria Editrice Vaticana.

With Mr. Ruffini’s appointment, Pope Francis continues his efforts to diversify the Roman Curia by appointing laypersons to whatever roles are possible. In 2016, he named two laypersons, the American television journalist Greg Burke and the Spanish radio journalist Paloma Garcia Ovejero, as director and deputy-director, respectively, of the Holy See Press Office.

Wait for it . . . I am sure that this man will have a nun or a little lay woman assigned as deputy to him, the decision maker, very soon.