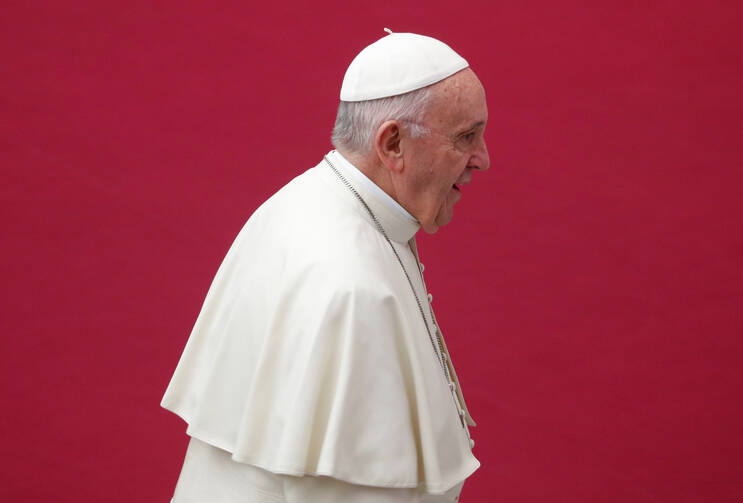 In a significant decision, announced today by the Vatican, Pope Francis has terminated the services of three cardinals who for the past five years were members of his council of nine cardinal advisors. Two of them have been embroiled in the sexual abuse of minors scandal in their respective countries—Cardinal George Pell in Australia and Cardinal Francisco Javier Errazuriz in Chile—while the third, Cardinal Laurent Monswengo Pasinya of the Democratic Republic of the Congo, has almost reached the age of 80 and has not participated in recent meetings.

Greg Burke, the director of the Holy See’s Press office, made the announcement today in a briefing at the end of the 27th meeting of the council of cardinal advisors, which was held at the Vatican over the past three days.

Mr. Burke revealed that at the end of October, Pope Francis sent a letter to all three cardinals thanking them for the work they had done over the past five years as members of his advisory council.

There have been many calls for the pope to replace Cardinals Errazuriz and Pell for their involvement in the sex abuse scandal.

The Chilean cardinal, who was accused of cover-up of abuses and is 85, had already handed in his resignation, while Cardinal Pell is in the midst of a criminal trial in Melbourne, Australia, on charges of “historical child sexual offenses” that is expected to continue into next year.

Asked by the AFP reporter at the briefing whether given his legal situation Cardinal Pell would continue as prefect of the Secretariat for the Economy, Mr. Burke replied, “That’s a good question!” He then stated: “The Holy See has the maximum respect for the Australian judicial authorities. We are aware that there is a provision in force that imposes silence, and we respect that order.”

At its last meeting in September, the council asked to relieve some of the members of their duties, including for reasons of age. This referred especially to Cardinal Errazuriz, who is 85, and Cardinal Monswengo, who is almost 80 and has just been replaced as Archbishop of Kinshasa.

Nevertheless, the pope was also aware that the presence of Cardinals Errazuriz and Pell on his council of cardinal advisors was a major embarrassment and led some to question his commitment to dealing fully with the abuse scandal. Moreover, there have been many calls for him to replace the Chilean and Australian cardinals for their respective involvement in the abuse scandal. Cardinal Erratzuriz has been accused by survivors in Chile of covering up the abuse of minors done by the former priest Fernando Karadima, whom Francis has recently laicized. The cardinal is the subject of civil litigation in Chile.

Pope Francis gave Cardinal Pell a leave of absence from his post as prefect of the Secretariat for the Economy so the cardinal could return to Australia to defend himself against the charges of historical sexual offenses. His five-year term of office as prefect ends on Feb. 24, 2019, and it is expected that the pope will appoint a new prefect in the coming months.

it seems the prudent thing to do. Even if these cardinals are found completely innocent, it distracts from the current confidence crisis. It is a little surprising to me that Cardinal Maradiaga was not also removed, given the problems in his diocese. Then there are questions about Cardinal Marx (the German abuse revelations and the doctrinal disputes in Germany), and Cardinal Parolin (a possible obstacle to investigating the McCarrick affair). We are in difficult time for the hierarchy of the Church.

A prudent decision by Pope Francis.
We now await how Pope Francis and the Conference of Bishops in February will handle all the allegations described in the PA Grand Jury Report, the Vigano letter and the entire McCarrick Scandal including how and why JP II promoted him to Cardinal when many Bishops/Cardinals in the U.S. and the Apostolic Nuncio to the U.S. knew about his decades-long sexual abuse. Many of these allegation might to untrue or lack sufficient evidence to proof guilt, but it is possible that the evidence will be sufficient to expose a systemic cancer of sexual immorality, coverup and/or gross negligence that has inflicted many priests, bishops and the highness levels of the hierarchy. Everyone must to be presumed innocent until proven guilty, but the process and makeup of the investigative committee and the depth and transparency of the facts is paramount to restore the credibility of the Church to investigate and hold accountable its own.
May the Holy Spirit guide our Church and its leaders and put this scandal behind us.

I too find it prudent to dismiss any cardinal or bishop in a highly visible office if there is a credible allegation of abuse or cover up. The dismissal doesn't have to be harsh or assume guilty. It would be based on the need for the church-- especially in these troubled times-- to protect the church from scandal and accusations of being soft on bishops that may have committed serious sins/errors. I am shocked at how many "heavy hitter" cardinals have been tarred with allegations. How did they rise to high office?