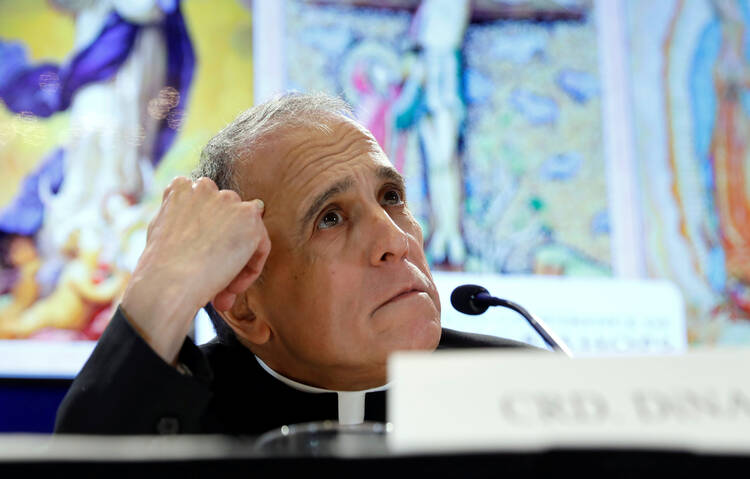 Cardinal Daniel DiNardo, president of the U.S. Conference of Catholic Bishops, looks up while holding a press conference Nov. 12 at the bishops' general assembly in Baltimore. (CNS photo/Kevin Lamarque, Reuters)

Prosecutors investigating a sexual abuse case against a Houston-area priest searched the offices Wednesday of the local archdiocese, which is led by the cardinal who is heading the Roman Catholic Church's response in the U.S. to sexual misconduct.

The intensifying investigation has raised questions about how Cardinal Daniel DiNardo of the Archdiocese of Galveston-Houston and his staff dealt with complaints against Manuel La Rosa-Lopez, who is accused by two people of fondling them two decades ago when they were teenagers.

DiNardo is also head of the U.S. Conference of Catholic Bishops, leading the American response to the ongoing clergy abuse crisis.

Both victims have told The Associated Press that they met with DiNardo but felt he didn't take their complaints about La Rosa-Lopez seriously.

The archdiocese issued a statement saying it was fully cooperating with the investigation. It acknowledged holding "confidential documents kept in a secure manner for the protection of the privacy of individuals."

Montgomery County District Attorney Brett Ligon, whose office conducted the search Wednesday, said authorities were looking for employment records and disciplinary records related to La Rosa-Lopez, along with anything that might lead to the discovery of other potential crimes. Officers from the Texas Department of Public Safety and federal agencies joined the search, Ligon said.

"This is not a search warrant against the Catholic Church," Ligon said, adding: "We're going to go wherever the investigation requires us to go."

The archdiocese issued a statement saying it was fully cooperating with the investigation. It acknowledged holding "confidential documents kept in a secure manner for the protection of the privacy of individuals."

Ligon told reporters that his office had spoken to the local U.S. attorney, which did not immediately respond to an Associated Press request for comment about whether it was also investigating the archdiocese.

La Rosa-Lopez's attorney, Wendell Odom, said the priest has denied the sexual abuse allegations. Odom questioned why prosecutors conducted an on-site search instead of requesting documents through a subpoena, calling it "a little bit alarming."

Facing mounting criticism since the arrest, DiNardo wrote a piece published Monday in the Houston Chronicle saying he removed La Rosa-Lopez from ministry after meeting with one of the accusers in August.

That accuser told the AP in September that he felt DiNardo was dismissive and said, "You should have told us sooner."

DiNardo's column did not address the allegations of the other accuser, a woman now in her 30s who told AP she met with DiNardo shortly after discovering in 2010 that La Rosa-Lopez had become the archdiocese's vicar for Hispanic ministry — a position he held at the time of his arrest eight years later.

Her family had reported La Rosa-Lopez in 2001, after he allegedly fondled her several times and led her to believe they had a secret relationship.

She says DiNardo, who came to Houston in 2004, and other church officials told her then that La Rosa-Lopez had received psychiatric treatment and would no longer be allowed to work with children.

The AP typically doesn't identify victims in sexual abuse cases and is withholding the names of both accusers.

Michael Norris, head of the Houston chapter of the Survivors Network of those Abused by Priests, said the documents seized Wednesday could be crucial to understanding the archdiocese's handling of La Rosa-Lopez's case over two decades.

"This is going to force DiNardo to be truly transparent," Norris said. "Now we're going to know everything."

*This story has been updated.

This must happen. Voluntary submission of records and so-called internal investigations are not sufficient. History has shown that such deep-rooted, widespread corruption can only be dealt with from the outside. People with no connection to the churches must go to the grounds and physically search the premises and seize records. What does they have to hide? Plenty.

Oh, yeh! Riot and loot, how sophisticated and progressive!
Next, how about the guillotine or is lynching more culturally appropriate?

Did you give passing thought to the data containing marriage tribunal records past and present or health reports on ailing pastors just to mention the first two which came to my mind?

Before you get too carried away suggesting what you think I might want, please let me elaborate. The outsiders I'm referring to are investigators from state governments and/or the federal government. They are constrained by their respective constitutions, common law and case law. They are experienced investigators who know the meaning and the value of discretion. During any such investigation they will review all available records, interview persons of interest, and determine whether or not to press any charges. That is all, no more and no less.

Be well! Peace be with you.
Pat

surely you don't think DiNardo or anybody in his staff might go ahead and destroy incriminating docs if they heard the Feds were coming? Good grief, Charle Brown, what is the world coming to!

Search and seizure with a warrant is not rioting and looting. Why would prosecutors take marriage tribunal records and priests' health records, except records that pertain to the particular abuser(s). Even if they did get the records accidentally they cannot reveal the contents. To reveal them would be political and career suicide.

The leadership (and I use the term loosely) in our Church has pretty much demonstrated that it is either complicit, incompetent, or too weak-spined to address this problem in a serious manner. Let's not forget how the Vatican, consumed with worry that the USCCB might actually attempt to begin addressing the abuse scandal, shut down the effort. We laity have had quite enough of this nonsense, and it doesn't require a tin foil hat to understand that there is an organized effort (which goes to the very top of the hierarchy) to suppress this scandal. The Texas Rangers are a good first step. Time to make this a full-blown RICO investigation. No matter what is uncovered, the Church will survive this crisis. Many of her hireling bad shepherds may not, and in fact I'm praying that they don't.

In the late 1960's when I began my career as an elementary school teacher, an experienced senior colleague, serving as an informal mentor, gave me one piece of advice almost immediately: “Never be alone with a child in a classroom and the door closed.”

I went on in later years as a union rep to defending teachers who ignored that wisdom either through stupidity, having never been so informed, or with evil intent. I am still amazed at the naivete of Catholic Bishops, having seen and heard what happens in other sectors of society on these issues over the past 25 years, ignoring the reality that some priests, religious and lay ministry employees behave similarly. In the public sector with which I am familiar, the accused is removed from service, a report to police authorities is made if there is criminal behavior, an investigation is completed, and a decision is made, finished, end of story. Are mistakes made in investigations? I know so, I have seen so, and rectifying those mistakes is a heavy burden. But the greater good through the process is the safety of children and other employees.

At what point do Bishops recognize this? Who advises them? Apparently, they don’t use the experiences of their laity to inform them! Clericalism at its worst to be sure!

+DiNardo, like too many bishops and Cardinals let the darkness overshadow the light. They listened to lawyers and not the Gospel. They say they were concerned about protecting the Church, when it was really about covering their butts.

I think we have all reacted in a similar way. Certainly, not on the scale or substance as he and others like him have, but we have.

With this said, they only way this behavior and response will ever be addressed is when there is another set of eyes and ears sitting in the power seats of the Church, who have them both being monitored by an independent office called “The Office of Moral Theology” in each diocease office. This office oversees personnel actions and financial matters. It should be four year appointment and may be a lay person or clergy. It serves as third set of eyes and ears. The office should provide an independent annual report of its activities relating to the moral conduct of the Church leadership. The report should be circulated to all Catholics in the Diocease and to the Metroplitian. Removal from the office should be based upon the officer’s ethical wrong doing submitted to a Governing Board of the Diocease, made up of a majority of lay people.

I know this may seem bureaucratic, but the problem we have today is that Bishops and Cardinals have no one watching them. Clearly, their humanness has run supreme over their holiness

Somebody in DiNardo's office should give wunderkind Cupich a call and inform him that we are, indeed, going down his much-feared rabbit hole. I expect, however, that instead of finding rabbits, the investigators are going to find scores of rats.

Eight Centuries Later, it looks like the Catholic Bishops are on the receiving end of the Inquisition!