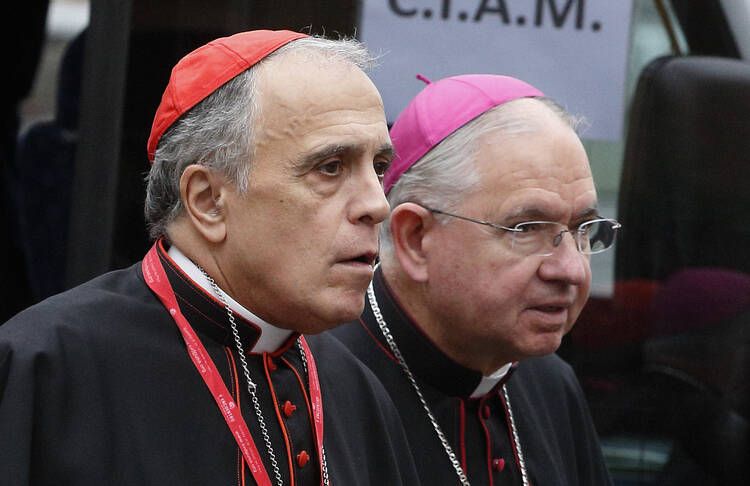 Cardinal Daniel N. DiNardo of Galveston-Houston, president of the U.S. Conference of Catholic Bishops, and Archbishop Jose H. Gomez of Los Angeles, vice president of the conference, arrive for a session of the Synod of Bishops on young people, the faith and vocational discernment at the Vatican Oct 5. (CNS photo/Paul Haring)

The president of the U.S. bishops' conference welcomed Pope Francis' pledge to fight attempts to cover up cases of sexual abuse and to stop offering special treatment to bishops who have committed or covered up abuse.

"On behalf of my brother bishops in the United States, I welcome the statement of Oct. 6 from the Holy See which outlines additional steps Pope Francis is taking to ensure the faithful are protected from the evil of sexual assault," Cardinal Daniel N. DiNardo said in a statement released Oct. 7 in Rome.

The cardinal, president of the USCCB, is in Rome for the Synod of Bishops. Archbishop Jose H. Gomez of Los Angeles, conference vice president, also is in Rome for the synod, and the two U.S. leaders were expected to meet privately with Pope Francis Oct. 8 as questions continue over the handling of years of allegations of sexual misconduct by former Cardinal Theodore E. McCarrick of Washington.

In a statement Oct. 6, the Vatican said Pope Francis had ordered a thorough review of the archives of Vatican offices to study how the allegations were handled.

"The courage of abuse survivors who first brought the horrific truth of sexual abuse to light must continue to be matched by our courage as pastors to respond in justice."

"The Holy See is conscious that, from the examination of the facts and of the circumstances, it may emerge that choices were taken that would not be consonant with a contemporary approach to such issues. However, as Pope Francis has said: 'We will follow the path of truth wherever it may lead,'" the Vatican statement said.

Cardinal DiNardo, who earlier had requested a full investigation, said, "The truth will ensure the terrible sins of the past are not repeated. The courage of abuse survivors who first brought the horrific truth of sexual abuse to light must continue to be matched by our courage as pastors to respond in justice."

The U.S. cardinal's statement was published the same day Cardinal Marc Ouellet, prefect of the Congregation for Bishops, responded to allegations by Archbishop Carlo Maria Viganò, former nuncio to the United States, that Pope Francis knew about and ignored the allegations against then-Cardinal McCarrick.

Cardinal Ouellet called Archbishop Viganò's accusations a "political" ploy that had wounded the unity of the church.

"Out of respect for the victims and given the need for justice, the inquiry currently underway in the United States and in the Roman Curia should provide a comprehensive and critical study of the procedures and the circumstances of this painful case in order to prevent something like it from ever happening in the future," Cardinal Ouellet said.

Cardinal DiNardo said he and all the U.S. bishops "offer our prayers and solidarity for the Holy Father. We urge all in the church, particularly the bishops, to reaffirm our communion with Pope Francis who is the visible guarantor of the communion of the Catholic Church."

“Ahead of meeting with Pope, Cardinal DiNardo accused of knowing about sex abuse allegations
"Cardinal seemed dismissive of situation," said one of the alleged victims. He also wrote down what he says is a quote from DiNardo: "You should have told us sooner."
Author: The Associated Press
Published: 2:16 PM CDT September 12, 2018
HOUSTON - As U.S. Catholic leaders head to the Vatican to meet with Pope Francis about a growing church abuse crisis, the cardinal leading the delegation has been accused by two people of not doing enough to stop a priest who was arrested this week on sexual abuse charges.”
https://www.khou.com/article/news/local/ahead-of-meeting-with-pope-cardinal-dinardo-accused-of-knowing-about-sex-abuse-allegations/285-593459543

M A Langkilde
4 years 1 month ago

Proverbs 6:16-19 16There are six things the LORD hates, seven that are detestable to him: 17haughty eyes, a lying tongue, hands that shed innocent blood, 18a heart that devises wicked schemes, feet that are quick to rush into evil, 19a false witness who pours out lies and a person who stirs up conflict in the community.

1 Timothy 1:5-7
The aim of our charge is love that issues from a pure heart and a good conscience and a sincere faith. Certain persons, by swerving from these, have wandered away into vain discussion, desiring to be teachers of the law, without understanding either what they are saying or the things about which they make confident assertions

Though I enjoy using WhatsApp and Facebook Messenger, Apple’s Messages app remains my favorite choice across iMessage on PC iDevices. Most of my friends who use Windows crave to use iMessaging. They often ask me, is there a way to use iMessage on Windows PC?

Some people love iMessage on Windows and some don't. This new generation brand war or software debate is pretty similar to the close soda fight of decades that is, Coca-Cola vs. Pepsi. The fight is between the hardcore loyal consumers of each of the brand, who are constantly enraged in order to make the other feel invaluable in front of the other.

Some people love iMessage app for PC and some don't. This new generation brand war or software debate is pretty similar to the close soda fight of decades that is, Coca-Cola vs. Pepsi. The fight is between the hardcore loyal consumers of each of the brand, who are constantly enraged in order to make the other feel invaluable in front of the other.

After the completion of the download, install it the same. Step 6. iMessage on Windows PC by using Chrome Remote Desktop allows access to another computer's apps and files securely via theChrome browser or Chrome book. So connect the two computers through the security code and enjoy the iMessage on your Windows PC.

Are you still wondering as to iMessage on Windows using IPADIAN Emulator, which is a typical and considered the best mode of conversing across all Apple Devices, to work on a Microsoft Windows PC? Well, worry no more. First good news is that you can, while the second is that you can get it by 2 different ways

TANCET 2019 application form issue last dates will be commenced from the month of February 2019. TANCET is a state level entrance exam to get admission into various PG programmes. The exam is conducted every year by the Anna University, Chennai. Candidates will be provided admissions in various government and government aided institutions in Tamil Nadu state. The University offers M.E., M.Tech, MCA, M.Arch, M.Plan and MBA courses.

Is anyone seriously suggesting that the widespread sexual abuse scandal did not occur? That "evil in epidemic proportions amongst consecrated religious in the Catholic church has started, erupted and spread and is currently dying out" is the issue for today?

The proper topic of today is abuse and neglect of power, failure of governance and lack of provision for rectification.

I take it for granted that human institutions function as hierarchies and that will never alter. I accept that hierarchies of age, of power and of office cannot be avoided.
I expect a properly functioning network of hierarchies to include error detection, investigation and coercive power to control and punish.

Is it too much to expect that the institution representing Almighty God and his values and expectations amongst men be a model and exemplar for all other institutions?

No wonder human institutions are so deeply and perpetually corrupt if Christianity cannot do any better than it does at present.

Who are these U.S. investigators? Are they bishops and cardinals and some theologians? What happened to an independent lay-lead and impartial committee to investigate all these matters? Why is this information about the investigators being kept from Catholics?