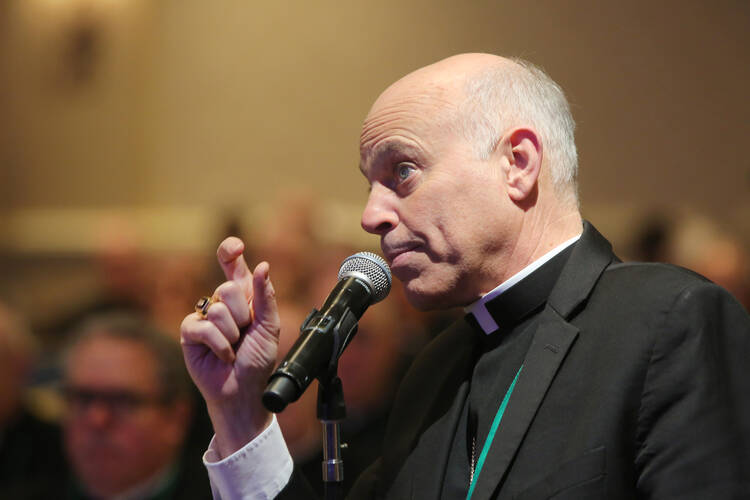 San Francisco Archbishop Salvatore J. Cordileone speaks from the floor on Nov. 14 at the fall general assembly of the U.S. Conference of Catholic Bishops in Baltimore. (CNS photo/Bob Roller)

Catholic bishops expressed shock this week at a request from the Vatican on Monday morning to delay a vote until next year on proposals aimed at holding themselves accountable over sexual abuse. The Vatican’s request was announced just minutes before they were to start debate on the measures. But the discussion of the proposals that followed—with the knowledge that no formal vote would be held this week—showed that finding a consensus on how to respond to the latest iteration of the crisis would not be easy. Ultimately, it appears, the Vatican may have saved bishops from further angering U.S. Catholics, many of whom expected concrete steps to be adopted in Baltimore, and that anger now seems directed toward Rome.

The set of proposals, created by various committees following a meeting of the U.S. Conference of Catholic Bishops’ executive committee in September, included creating a hotline to handle allegations against bishops of misconduct or mismanagement; standards governing the behavior of bishops; a laypeople-led review board independent of the U.S.C.C.B. to investigate claims; and possible sanctions for bishops who are no longer active in leadership because of sexual misconduct or mismanagement.

The set of proposals included a laypeople-led review board independent of the bishops’ conference to investigate claims.

During a press conference on Nov. 12, Cardinal Daniel DiNardo, the head of the U.S.C.C.B., said, “The final documents weren’t ready until October 30th, I think.” They were received in Rome just “a few days ago,” Vatican Insider reported on Nov. 13, meaning that officials at the Vatican would have had only a short period of time to vet the proposals to make sure they complied with canon law and to offer feedback.

U.S. bishops received the text of the proposals on Nov. 2, said Bishop Christopher Coyne, head of the bishops’ communications committee, during a press conference on Wednesday, adding that he was not sure when they arrived in Rome. Some bishops said they did not have enough time to review the documents in order to offer amendments before the start of the meeting. The Vatican asked the bishops to delay the vote until after a meeting of the heads of bishops’ conferences from around the world, to be held in Rome next February.

Cardinal DiNardo told the bishops on the morning of Nov. 12 that he received a letter from the Congregation for Bishops the day before alerting him to the request to delay the vote. The letter was not made public.

But in floor discussion, bishops articulated a number of other issues they believe need to be addressed in light of the abuse crisis.

Archbishop Salvatore Cordileone, the head of the Archdiocese of San Francisco, suggested that bishops study any link between gay priests and the sexual abuse of minors, stating “the correlation exists. To flee from it would be to flee from the truth, and to be perceived as fleeing from the truth.”

The assertion of the archbishop, who was elected on Wednesday to chair the bishops’ Committee on Laity, Marriage, Family Life and Youth, is controversial, as a massive independent study of the church’s sexual abuse crisis reported in 2011 that there is no link between homosexuality and abuse.

Other bishops criticized the media, suggested that the crisis is linked to the widespread rejection among the laity of the church’s teaching on sexuality, and repeated claims that the public remains unaware of steps bishops have taken since 2002 to combat abuse.

Archbishop Salvatore Cordileone suggested that bishops study any link between gay priests and the sexual abuse of minors, stating “the correlation exists.”

“Today outrage has become an industry. It’s become an addiction,” said Archbishop Thomas Wenski of Miami, who added that while he did not wish “to dismiss the real pain of the victims,” he urged bishops “to maintain a certain perspective and do what we have to be doing as bishops.”

Archbishop Joseph Naumann of Kansas said, “There’s a myth out there that nothing has happened since 2002 and that is simply not true.”

The U.S. bishops adopted new protocols in 2002 (in the so-called Dallas Charter) to protect children in Catholic institutions, including better training of priests and church volunteers. But bishops have largely not been held accountable for how they handle allegations of abuse, and the new proposals are meant to address this failure. But when it comes to specific steps, there does not seem to be agreement about what to do.

Where there was some consensus at this week’s meeting was the need for church leaders to address the case of former Cardinal Theodore McCarrick, who was removed from public ministry earlier this year following revelations that he sexually abused a minor decades ago and who then resigned from the College of Cardinals after allegations he sexually harassed seminarians.

Archbishop Joseph Naumann of Kansas: “There’s a myth out there that nothing has happened since 2002 and that is simply not true.”

Cardinal Joseph Tobin, the archbishop of Newark, offered a brief update to the bishops, telling them that four dioceses, in addition to the Vatican, are currently investigating the circumstances around Archbishop McCarrick.

As for more general reform, the bishops seemed united in wanting to adopt some kind of concrete action during the meeting to show the laity they understand the gravity of the crisis. Toward that end, Cardinal DiNardo announced that he had convened a task force comprised of former presidents of the bishops’ conference to sort through suggestions from bishops.

Cardinal Seán O’Malley of Boston, who heads the Vatican’s sex abuse commission, said bishops must come out of this meeting “with concrete action” or people will continue to lose faith that bishops can address the crisis in any meaningful way. He also asked if the third-party audits conducted of diocesan policies, which have given thumbs up to most U.S. dioceses in recent years, have lulled leaders “into a false sense of security.”

Bishop Michael Olson urged the group to make clear that Archbishop McCarrick “is not welcome” to participate in the bishops’ conference.

On Wednesday afternoon, as bishops prepared to wrap up the public portion of their meeting, debate largely focused on the merits of creating an independent review board to handle allegations against bishops. Some bishops expressed skepticism about the need for such a move, suggesting instead that existing diocesan review boards be empowered to handle claims. There were also questions about who would pay for the creation of a new entity, whether church law supports such a structure and who would appoint members of the commission.

Bishop Alexander Sample of Oregon worried that “enemies” of the church may use an abuse hotline to make false allegations against bishops, while other bishops expressed indignation that they could be asked to sign a pledge promising to live by a code of conduct even after they promised to live their vows at their ordinations.

A number of protesters, victims’ advocates and church activists gathered in Baltimore during the conference. About 250 people took part in a rally next to the hotel where bishops met that was hosted by Church Militant, a group that has been critical of bishops and seeks to oust gay men from the priesthood. Activists from the Survivors Network for Those Abused by Priests and Bishop Accountability also held protests in front of the hotel.

Cardinal DiNardo, in closing the meeting, said that the task force of former presidents of the conference would work to refine proposals and bring them to Rome in February.

But the founder of a new reform group called Five Theses said she is unsure that bishops understand what is needed to move forward.

“It’s not enough to set in place more stringent policies about reporting. All that is important, but it’s going to take a radical restructuring of the way decisions are made,” Liz McCloskey told America. “I am a little afraid they don’t all recognize that yet.”

That sentiment—that new processes alone are not enough—was echoed by Bishop Steven Biegler of Cheyenne, Wyo., who earlier this year led an investigation of one of his predecessors who stands accused of sexually abusing several minors.

“I do feel that we aren’t acting as guardians of the least,” Bishop Biegler said, describing negative interactions when pressing for an investigation from law enforcement, lawyers and other bishops. “I feel that we have no tenderness in our hearts to hear the cries that have come our way for mercy. I feel that we failed to work with co-responsibility for the laypeople.”

He said he fears if the only changes to follow the abuse crisis are tweaks in canon law or even the creation of a new commision, rather than a change in how bishops view their roles, that lay Catholics will have been let down.

“We need to address this need for conversion,” Bishop Biegler said. “It’s one of the places where people are really crying out for change.”

“Moving forward in concert with the church around the world will make the church in the United States stronger, and will make the global church stronger,” according to DiNardo.
I beg to differ. This conference was nothing more than lip service. Again. Kiss your American church goodbye.

Business as usual except...RICO is coming for them.

What was the percent of male on male abuse? 81%
But homosexuality had nothing to do with it? Really?
I guess McCarrick wasn’t gay either.

JPlacette,
Your comment about the 81%is not lost on the American bishops. See Archbishop Cordileone’s comment from the meeting. They—American bishops—will need to ask themselves why, to this point, they have been so collectively silent in the face of the disavowal of the homosexual materiality of clerics’ abusing by the entity that they set up to study and advise them about this abuse, namely John Jay College. This silence of theirs has lasted for seven years. Time to break the silence, to be sure. Time to call out John Jay College for its failure to identify the correlation between clerical homosexuality and the predation we have witnessed. Time for the American bishops to find their collective moral voice on the matter. And, time for Rome to help them to do so.

Prayers for the success of the February meeting in Rome.

Actually, in the first John Jay report the dots were connected. I think due to pressure from the psychological left and overall “political correctness”, the 2011 report downplayed the connection.

In Haryana there are two types of exams HSSC Exams and Haryana Exams. So you can share a complete info regarding the same.

thanks for providing a great quality stuff. I enjoyed reading your article. Download nox to enjoy the games on pc devices.