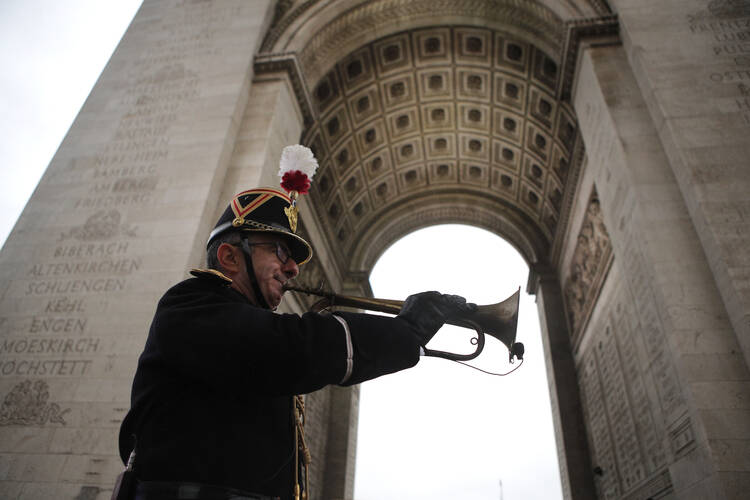 A military officer plays the original Armistice bugle from 1918 under the Arc de Triomphe on Nov. 11, 2018, in Paris. (AP Photo/Francois Mori, Pool)

On the centenary of the end of World War I, Pope Francis reminded the world that the four-year conflict remains “a severe warning to all to reject the culture of war and to seek by every legitimate means to put an end to the conflicts that still bloody many regions of the world.” But, he added, “It seems that we do not learn!”

Pope Francis reminded the world that the four-year conflict remains “a severe warning to all to reject the culture of war.”

Francis recalled how his predecessor, Pope Benedict XVI, defined that terrible war as “a useless slaughter” and said “for this reason, today bells throughout the world, including those of St. Peter’s Basilica, will ring out at 13.30 [Italian time],” marking the exact hour when the armistice was declared.

The war started in 1914, and pitted Germany, Austria-Hungary and the Ottoman Empire against Great Britain, the United States, France, Russia, Italy and Japan. It caused the deaths of nearly 10 million combatants—including 117,000 U.S. military personnel—and, by some estimates, another 10 million civilians. The war was a contributing factor to the influenza epidemic of 1918 and the Armenian genocide that killed millions more. The punitive peace treaty that followed World War I also paved the way for the even more destructive World War II.

Referring to the terrible toll in that first world war, Pope Francis declared, “as we pray for the victims of that immense tragedy, let us say with force: Let us invest in peace, not in war.”

Pope Francis has argued that “a third world war is being fought piecemeal today” and has called for an end to the arms trade.

He made his passionate appeal to the world’s leaders and nations from the papal study window of the Vatican’s Apostolic Palace just after midday on Sunday, as he addressed 20,000 pilgrims from many countries who had gathered in St. Peter’s Square to pray with him and receive his blessing.

During his five-year pontificate, Pope Francis has argued that “a third world war is being fought piecemeal today” and has called many times for serious efforts to end the conflicts in Syria, Yemen, the Democratic Republic of the Congo and other countries. He has called for an end to the arms trade, including the production and sale of arms that fuel such conflicts and take away resources from such fundamental human needs as housing, health care and education. He has also emphasized that conflicts and poverty, as well as climate change, are the main reasons for today’s phenomenon of mass migration.

100 years after the Great War, what can we say to an exhausted world?
Terrance Klein

The tragedy of Joyce Kilmer, the Catholic poet killed in World War I
Stephen Werner

Pope Francis has also condemned not only the use but also the possession of nuclear arms, and next year will travel to Japan, and perhaps also to North Korea, where he is expected to reiterate forcefully his stance against nuclear war and support the denuclearization of the Korean peninsula, and reconciliation between peoples on either side of the 38th Parallel.

As he concluded his appeal for peace, Francis recalled that St. Martin of Tours tore his cloak in two to share with a poor man and declared, “this gesture of human solidarity indicates to everyone the way to build peace.”

He also announced that the second World Day of the Poor will be celebrated in dioceses and churches across the globe next Sunday, Nov. 18, “with many initiatives of evangelization, of prayer and sharing.” And he drew attention to the fact that already in St. Peter’s Square, a health center has been set up for one week to provide care for all those who are in difficult. He hoped that next Sunday’s celebration “will foster growing attention to the needs of the least ones and those on the margins of society.”

Economic success/sharing started about 300 years ago and accelerated in the 1800's building economic success stories in large areas of the world through innovation. After WWII the outcomes from these innovations spread to nearly all the world. Poverty is disappearing from the world. That is why there are over 7 billion people. Without sharing this would not have happened.

Our academic pursuits, along with a range of extracurricular activities, help in honing a child's skills and ensuring that he/she grows to be a mature and responsible citizen.
best school in greater noida

I hope the Pope recognizes that poverty is disappearing from a world of 7 billion people due to forces let loose over 300 years ago in a small part of the world. At that time there was less than 1 billion people in the world, almost all of them serfs or slaves and starving.