'America' Covers World War I: An archive of essays 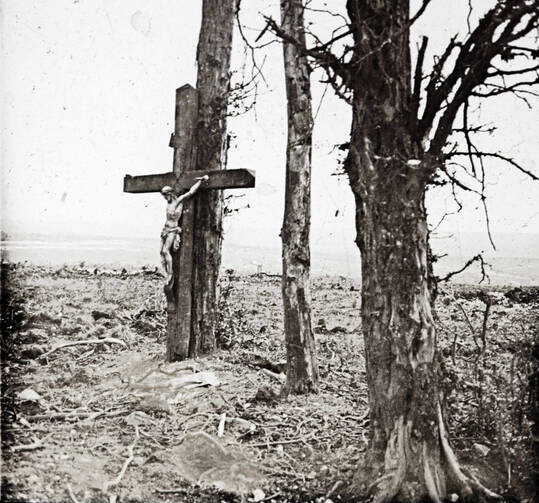 Less than two weeks after the end of the First World War, an editorial in America read: “From the beginning to the end of the war two supreme forces have been in conflict: might has been struggling with right.” From 1914 to 1918, America followed this struggle, covering everyone from popes to peasants. One hundred years later, here’s a selection of our coverage from that time period, with a particular focus on the events after April 1917, when the United States joined the war.

“Our Soldier’s Letters,” B. De Courson (9/2/1916) – Here America examines the attitudes of French soldiers through the letters they sent to the head sister of the hospital where they stayed after being wounded.

“’I must go back to the front as the war is not finished, à la grâce de Dieu; but I hope to get a good wound and be sent back to the Sisters, who are so kind and so devoted to the poor soldiers.’”

“The Peasant Women of France,” B. De Courson (9/16/1916) – Although the United States wouldn't enter the war for months, by 1916 many Frenchmen had been away from home for two years. Missing their husbands and sons, the women of France were forced to keep their farms running alone.

“Suddenly a shell, first one, then a second, then a third, swept across the sky above the group. The horses, mad with fear, reared and kicked; the Englishman and his interpreter threw themselves at their heads and with difficulty restrained them; a dog, trembling with fear, crouched low, almost under the machine; the young woman and her aged companion never turned a hair.”

"The War Policy of the Pope,” James Cardinal Gibbons (2/23/1918) – During the war, America published several pieces about the Vatican’s place in the peace efforts. As this article suggest, Pope Benedict XV faced criticism for his decision to remain neutral in the war, yet he worked intensely to mediate the conflict.

“Others have but their own individual sorrows. He bears the sorrows of all. Wherever he turns his eyes from the Vatican he sees his children locked in deadly strife.”

"Christ’s Cross in France,” (5/4/1918) – This article further examines France’s attitudes towards Catholicism during WWI. Although the French government was fiercely secular, the author discusses how attitudes on the ground were far different, and how the fighting men took solace in the sight of the cross.

“Wherever they are, the crucifix rises behind their lines, meeting their eyes at dawn, soothing them at night, and guarding the heroes of No Man’s Land.”

“French War Orphans,” J. Harding Fisher, S.J. (6/29/1918) – This is one of several pieces that America published between 1914 and 1918 concerning the fate of French war orphans. Following a Chicago Tribune article that endorsed the French plan for orphan adoption, J. Harding Fisher, S.J. explains the plan’s anti-Catholic roots, and how the orphaned children would be made to abandon the faith.

“The adoption by the nation of the war orphans, which was the ostensible object of the law, had the fullest sympathy of Catholics, for they, no less than others, were eager to provide for the care and education of those whose fathers had fallen in the defense of France. The provisions of the law were such, however, as to give them only too well-founded reasons for serious apprehension.”

"A War Lesson,” (11/9/1918) – The author responds to a letter written to the magazine, during the course of which the writer confesses that his faith has been shaken by the horrors of the war.

“Have not 2,000,000 and more young Americans left home and comfort and success for a strange land and hardships and a humble position, three things not acceptable to mere flesh and blood? Why all this?”

"An Alert in Paris,” Elizabeth Christitch (11/2/1918) – Soon after hearing news of the American victory at St. Mihiel, Elizabeth Christitch and her companions were forced to take shelter in a Parisian bomb shelter. She describes the scene as she gathered with the other hotel guests gather to wait out the raid.

“While we sat in groups, chatting, or, in one corner, saying the rosary, in the clean-swept cellar furnished with some chairs, hearing now but a muffled cannonade, we were struck by the total absence of anger or spite towards the aggressor.”