Pope Francis: Indifference to the poor is a great sin 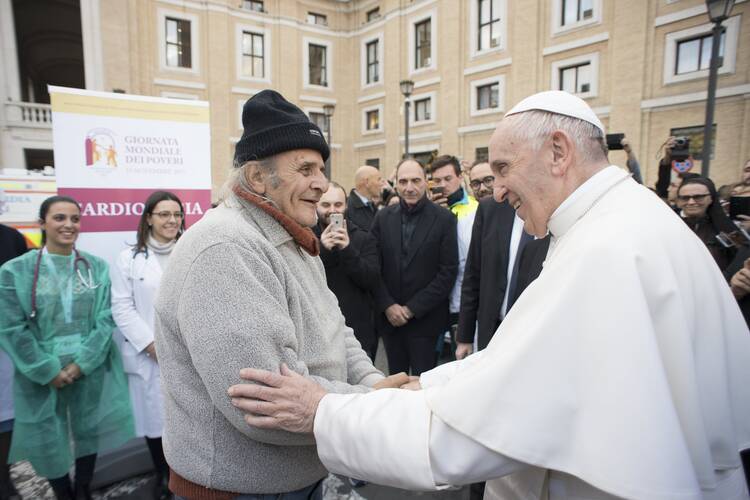 This morning, Pope Francis celebrated Mass for some 7,000 poor people in St. Peter’s Basilica, on the first World Day of the Poor.

Afterwards, he joined 1,500 of those who attended Mass for lunch in the Vatican’s audience hall, while the remaining thousands were given lunch in communities across the city, including at the North American College in Rome.

St. Peter’s Basilica has hosted many great events but never one entirely dedicated to the poor. At the end of the Jubilee of Mercy, Pope Francis decreed that every year, near the end of the church’s liturgical year, a World Day of the Poor is to be celebrated in dioceses and churches across the world, because “the poor are at the heart of the Gospel.”

“If in the eyes of the world the poor have little value, they are the ones who open to us the way to heaven; they are our passport to paradise,” Pope Francis said in his homily. “In the poor, we find the presence of Jesus, who, though rich, became poor for us.”

In the poor, we find the presence of Jesus, who, though rich, became poor for us.

The Mass was attended by poor people from Italy, France, Spain, Germany, Poland as well as migrants and refugees from across the world. Tony, a refugee from Syria, read one of the readings at Mass, while a Brazilian and Peruvian, who are being assisted by scholarships, read two of the prayers of the faithful.

Twelve minors, some of them migrants, served at the Mass, while a family living in precarious conditions, with a one-year-old daughter with cystic fibrosis, brought up the gifts at the offertory. At the offertory, a charitable organization which provides bread for the poor every day, brought up a quantity of bread, which was eaten later at lunch with the pope.

Francis expressed “joy” at celebrating the Eucharist—“the food for life’s journey”—with these attendees. “All of us, none excluded, need this,” he said. “For all of us are beggars when it comes to what is essential: God’s love, which gives meaning to our lives and a life without end.”

Later, commenting on the Gospel story of “the talents,” Pope Francis said: “Let us realize this: We do have talents; in God’s eyes, we are ‘talented.’ Consequently, no one can think that he or she is useless, so poor as to be incapable of giving something to others.”

He told his audience that “God, in whose eyes no child can be neglected, entrusts to each of us a mission.” He gives us talents “to use wisely” and bear fruit. The pope explained that the Gospel tells us the master “was displeased” with the one who did not use his talent but hid it under the ground—“his evil was that of failing to do good.”

The Gospel tells us that “the one who adds new talents is truly ‘faithful’ because he sees things as God does,” said the pope. “He does not stand still, but instead, out of love, takes risks. He puts his life on the line for others; he is not content to keep things as they are. One thing alone does he overlook: his own interest. That is the only right ‘omission.’”

Pope Francis declared that “omission is also the great sin where the poor are concerned” and it is called “indifference.”

“It is when we say, ‘That doesn’t regard me; it’s not my business; it’s society’s problem.’ It is when we turn away from a brother or sister in need, when we change channels as soon as a disturbing question comes up, when we grow indignant at evil but do nothing about it. God will not ask us if we felt righteous indignation, but whether we did some good.”

“We please God,” the pope said, by showing love to “the hungry and the sick, the stranger and the prisoner, the poor and the abandoned, the suffering who receive no help, the needy who are cast aside. On their faces we can imagine seeing Jesus’ own face; on their lips, even if pursed in pain, we can hear his words: ‘This is my body.’”

Pope Francis told his worldwide congregation, “In the poor, Jesus knocks on the doors of our heart, thirsting for our love. When we overcome our indifference, and in the name of Jesus we give of ourselves for the least of his brethren, we are his good and faithful friends, with whom he loves to dwell.”

“We see true goodness and strength: not in closed fists and crossed arms, but in ready hands outstretched to the poor, to the wounded flesh of the Lord. There, in the poor, we find the presence of Jesus. For us it is an evangelical duty to care for them, as our real riches, and to do so not only by giving them bread, but also by breaking with them the bread of God’s word, which is addressed first to them.

To love the poor means to combat all forms of poverty, spiritual and material.

“To love the poor means to combat all forms of poverty, spiritual and material. And it will also do us good. Drawing near to the poor in our midst will touch our lives. It will remind us of what really counts: to love God and our neighbor. Only this lasts forever, everything else passes away.”

Greeting tens of thousands of pilgrims in St. Peter’s Square after Mass, Francis recalled that Blessed Solanus Casey, O.F.M., was beatified in Detroit yesterday. Of Father Casey he said: “He was a humble and faithful disciple of Jesus, and he distinguished himself by his tireless service to the poor.” Francis prayed that his witness may help priests, religious and lay people “to live with joy the bond between announcement of the Gospel and love of the poor,” as has happened in Rome and in dioceses around the world today.

He concluded with these words: “I hope that the poor will always be at the center of our communities, not only on occasions like this, but always, because they are in the heart of the Gospel, and in them we meet Jesus who speaks to us and appeals to us through their sufferings and their needs.”