What kind of God do martyrs die for? 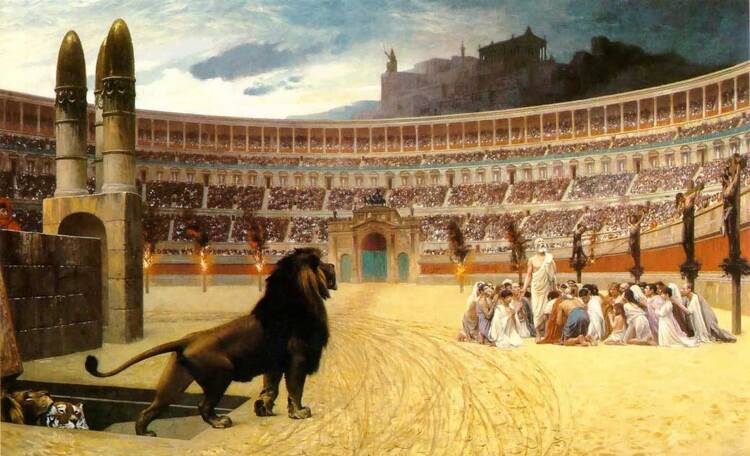 Rabbi Akiba ben Yosef died while praying the declaration of faith recorded in the sixth chapter of Deuteronomy. It is called the Shema, and it is still pronounced in Jewish morning and evening prayers. Parents teach the prayer to the children, and a devout Jew wants it to be the last words uttered in life.

Rabbi Akiva, as he is more commonly known, was executed by the Romans, accused of participating in the Bar Kokhba rebellion of 132-36 C.E., the last of three Jewish revolts against Roman domination.

His Roman judge, Tyrannus Rufus, was amazed at how calmly the rabbi prayed, even while being tortured, and he accused the sage of being a sorcerer. The Romans were flaying his skin with an iron comb. The rabbi replied, “I am no sorcerer; but I rejoice at the opportunity now given to me to love my God ‘with all my life,’ seeing that I have hitherto been able to love Him only ‘with all my means’ and ‘with all my might.’” And pronouncing the word “one,” Rabbi Akiva expired.

We are the inheritors of an age that sought to radically rethink everything, even the things of God. Endorse or reject that agenda, there is no ignoring it. We now live in a world with foundations apparently no deeper than those we dig each day.

How can one debate desire or harangue about hope?

And some of our contemporaries do not simply judge individual “truths of the faith.” They ask whether faith itself is something that can be considered true or false.

Of course, their understanding of faith is not the real entrance of God into human history and its unfolding historical consequences. No, they think of faith or spirituality as the human spirit, seeking something beyond verification or falsification. And how can one debate desire or harangue about hope?

We Christians honestly believe that God has entered human history and that this revelation makes demands upon us, just as it did upon Rabbi Akiva. We also confess that God has fully revealed himself in Jesus Christ. No more can be offered, not when God has already given not just a message but his very self.

It was fitting that we should have such a high priest:
holy, innocent, undefiled, separated from sinners,
higher than the heavens.
He has no need, as did the high priests,
to offer sacrifice day after day,
first for his own sins and then for those of the people;
he did that once for all when he offered himself (Heb 7:26-27).

Yet God fully given is not yet God fully received. Because we are less than God, we must continue to reverence God as the deepest of mysteries. Here the word “mystery” does not mean a problem yet to be solved. Nor does it mean something we are to accept without questions, which is what many nonbelievers think is the case. No, for us, “mystery” refers to a reality that will forever exceed our grasp. Consequently, yet somewhat paradoxically, there are truths that we must hold, even as we acknowledge that they exceed our understanding.

Church teaching will always be called into question. There is no getting away from that, not only because of the age in which we live but also because of who we are as humans—those who must grow. When I can see both sides of a contested issue, to such an extent that I weary and bewilder myself, I look to the martyrs. Does the proposed, new understanding do justice to their act of witness?

The face of Jesus, set free from the facts of history, is a personal fantasy, not the living God of Israel.

For example, is human sexuality being radically reconfigured in our lifetimes? Many would say, yes. Yet we know from the history of the early church that the first Christians were distinguished, even to the point of death, by their adherence to a moral code radically more demanding than those of Greco-Roman life. What do we make of that?

Another example: Is one church denomination as good as the next? I cannot reconcile that notion with the witness of Sts. Thomas More, John Fisher, Edmund Campion and a host of other martyrs. Our modern indifference to doctrine does not even do justice to the many Protestants who died for what they believed.

Is there some way to reconcile ancient fervor with modern reticence? Ultimately, our faith is about an encounter with a person, not a system of belief, a face more than facts. And, even in our modern world, we still sense that a person is not to be debated, nor weighed in scales. A person standing before us demands an either-or response. Anything less is certainly not love for the other.

No one dies for God as an unspeakable mystery, as simply the word we use for the openness of the human spirit.

Something has gone stale in your spirituality if you do not fervently feel drawn to the person of Jesus Christ, if he is only one more debatable detail of modern life. Yet remember: We only have access to his person through the revelation given to the church, revelation that still acts within her by the work of the Holy Spirit.

Although you have not seen him you love him; even though you do not see him now yet believe in him, you rejoice with an indescribable and glorious joy,as you attain the goal of your faith, the salvation of your souls (1 Pt 1:8-9).

That is why it is not sufficient to scuttle all facts about Christ and claim only a face. The face of Jesus set free from the facts of history is a personal fantasy, not the living God of Israel.

Why is it so hard for us to show mercy?
Terrance Klein

How can we reflect the image of God?
Michael Simone, S.J.

No one dies for God as an unspeakable mystery, as simply the word we use for the openness of the human spirit. But if we truly believe that doctrines—truths drawn from historical events—ultimately serve to reveal a person, someone who entered and remains in history, then we are compelled to surrender ourselves to the person who stands before us.

That is what martyrs do. In the Babylonian Talmud, when asked by his disciples how he could pray the Shema even while dying so horribly, Rabbi Akiva answered:

All my life I was worried about the verse, “with all your soul” (and the sages expounded this to signify), even if He takes away your soul. And I said to myself, when will I ever be able to fulfill this command? And now that I am finally able to fulfill it, I should not? Then he extended the final word “One” until his life expired while uttering it.

Fr. Klein, it is extremely difficult to say the word 'martyr' in present day America, the same way the word was understood even 100 years ago. The concept of giving one's life for an ideology is virtually non-existent, and nearly incomprehensible to the millenials.

Granted that martyrdom has been displayed in the modern world by the terrorists who, in the name of Islam and Christianity, commit unspeakable atrocities that include their own destruction. How can this be comprehended as 'dying for one's beliefs' at the cost of many other lives??

With the onslaught of the secular state, politics now enters the picture, and yet we must still honor the separation of church and state. How does this dilemna represent itself in religious instruction outside of the public education system???

Fortitude of spirit is the answer for the believer, but that fortitude must come from a solid
base built over the years of steadfast belief. We eschew the word 'absolute' in beliefs today, and relativity insinuates itself into our cleft rock of faith.