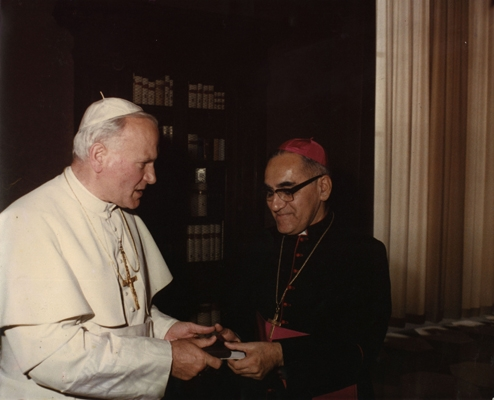 As archbishop of San Salvador, Óscar Romero advocated for the poor and worked for peace amid an escalating civil war. For this reason, he was assassinated as he concluded his homily on March 24, 1980. On Sunday, Oct. 14, Óscar Romero will be canonized in Rome.

The Mass was being offered for the first anniversary of the death of Sara Meardi de Pinto, mother of Jorge Pinto, publisher and editor of El Independiente, a small weekly newspaper. The Gospel reading was Jn. 12:23-26:

The hour has come for the Son of Man to be glorified. I assure you, unless the grain of wheat falls to the ground and dies, it remains infertile. But if it dies, it produces a great yield. Those who love their own life lose it; those who hate themselves in this world will be preserved for life eternal. Let whoever wants to serve me, follow me; and my servant will be where I am. Whoever serves me will be rewarded by my Father.

James R. Brockman, S.J., author of Romero: A Life (Orbis Books) and editor/translator of Romero's The Violence of Love (Harper), reexamined the tape recording of Archbishop Romero's homily and published the following translation of it in the March 28, 1992, issue of America:

Because of what Jorgito has written in today's editorial in El Independiente, I have some understanding of his filial emotions on the anniversary of his mother's death. In particular, I can glimpse her noble spirit, how she placed all of her refined education, her graciousness, at the service of a cause that is so important today: our people's true liberation.

You have just heard Christ's Gospel, that one must not love oneself so much as to avoid getting involved in the risks of life which history demands of us.

My dear brothers and sisters, I think we should not only pray this evening for the eternal rest of our dear Doña Sarita, but above all we should take up her message, which every Christian ought to give intense life to. Many do not understand, and they think Christianity should not get involved in such things. But, to the contrary, you have just heard Christ's Gospel, that one must not love oneself so much as to avoid getting involved in the risks of life which history demands of us, that those who would avoid the danger will lose their life, while those who out of love for Christ give themselves to the service of others will live, like the grain of wheat that dies, but only apparently. If it did not die, it would remain alone. The harvest comes about because it dies, allows itself to be sacrificed in the earth and destroyed. Only by destroying itself does it produce the harvest.

From her place in eternity, Doña Sarita wonderfully confirms the message of the following passage from Vatican II, which I have chosen on her behalf. It says:

We do not know when the earth and humanity will be consummated, nor do we know how the universe will be transformed. This world’s present state, deformed by sin, is to pass away. But God teaches us that He is preparing a new dwelling place and a new earth where justice dwells and whose blessedness will fulfill and surpass all the longings for peace which spring up in the human heart. Then, when death has been overcome, God’s children will arise in Christ. What was sown as something weak and corrupt will be clothed with incorruptibility. Charity and its fruits will endure, and all the creatures that God created with human beings in mind will be free of the bondage of futility.

We are warned that it profits one nothing to gain the whole world and lose oneself. Nevertheless, the expectation of a new earth must not weaken but rather stimulate our concern for perfecting this earth, where the body of the new human family grows, a body that even now is able in some way to foreshadow that new age. And so, to the extent that temporal progress can contribute to the better ordering of human society, it is of serious concern for the kingdom of God, even though temporal progress must be carefully distinguished from the growth of Christ's kingdom.

Let us do what we can. We can all do something, at least have a sense of understanding.

For after we have spread the benefits of human dignity, brotherhood and freedom across the earth in the Lord's Spirit and following his command, we shall rediscover all those good effects of our nature and of our efforts, but clean of every stain, brightened and transfigured. Then Christ will hand over to the Father "an eternal and universal kingdom: a kingdom of truth and life, a kingdom of holiness and grace, a kingdom of justice, love and peace" [Preface from the Mass of Christ the King]. “On this earth that kingdom is already present in mystery. When the Lord returns, its perfection will be accomplished" [Gaudium et Spes, No. 39].

This is the hope that inspires us Christians. We know that every effort to better a society, especially one that is so enmeshed in injustice and in sin, is an effort that God blesses, that God desires, that God demands of us. And when one finds generous people, like Sarita, and her thought incarnated in Jorgito and in all those who work for these ideals—one must try to purify them, of course, Christianize them, clothe them with the hope of what lies beyond. That makes them stronger, giving us the assurance that all that we work at on earth, if we nourish it in a Christian hope, will never be a failure. We’ll find it in a purer form in that kingdom where our merit will be in what we have worked at here on earth.

I think that to aspire is not without purpose at a time of hope and struggle, on this anniversary. We remember with gratitude that generous woman who was able to sympathize with the concerns of her husband and of her son and of all who work for a better world, and who added her own part, her grain of wheat, in her suffering. Beyond a doubt, this will guarantee that her heavenly reward will be in proportion to that sacrifice and understanding, which many lack at this moment in El Salvador.

I beg you all, dear brothers and sisters, let us look at these matters at this moment in our history with this hope, with this spirit of giving, of sacrifice, and let us do what we can. We can all do something, at least have a sense of understanding. The holy woman we remember today could not do many things directly perhaps, but she could encourage those who can work, could sympathize with their struggle, and above all could pray. Even after her death, she sends a message from eternity that it is worthwhile to labor, because all those longings for justice, peace and well-being that we experience on earth become realized for us if we enlighten them with Christian hope. We know that no one can go on forever, but those who have put into their work a sense of very great faith, of love for God, of hope among human beings, find it all results in the splendors of a crown that is the sure reward of all who labor thus, spreading truth, justice, love and kindness on the earth. It does not remain here, but, purified by God’s Spirit, is harvested for us and given us for our reward.

This holy Mass, the Eucharist, is itself an act of faith. With Christian faith we know that at this moment the wheaten host is changed into the body of the Lord who offered himself for the world's redemption and in that chalice the wine is transformed into the blood that was the price of salvation. May this body immolated and this blood sacrificed for humans nourish us also, so that we may give our body and our blood to suffering and to pain—like Christ, not for self, but to impart notions of justice and peace to our people.

Let us, then, join together intimately in faith and hope at this moment of prayer for Doña Sarita and for ourselves.

[At this moment the fatal shot struck Archbishop Romero, and he fell mortally wounded.]

The words of Archbishop Romero which inspire and touch me, an imperfect Catholic, the most are: "I do not believe in death without resurrection. If they kill me, I will rise again in the people of El Salvador." When this holy man who so courageously cared for the poor and suffering people of his divided nation is soon made a saint, in my view he should be remembered for being like Jesus, since Blessed Romero in the spirit of Jesus showed no greater love "...than to lay down his life for his friends." ( excerpt from John 15:13). For him, his "friends" were among the most vulnerable, defenseless human beings in his midst. Although not a martyr for the faith in the technical sense, I know a woman who demonstrated this quality in an expansive sense. Did she literally "lay down (her) life...?" Certainly not. However, this admirable Catholic, when she became pregnant by rape, courageously gave life to her unborn baby.

Saint Archbishop Romero...Please pray that all Those who are Inspired by Your Death may Instill in Themselves the Thoughts and Words of this, Your Last Homily. As just as you finished this Beautiful Sermon, You were Martyred. I hope that You were Buried in the Same Vestments that You died in and that Your Body was not wiped off...Because You cannot be any Purer or Cleaner than You were at that Moment. Worthless Servant of Jesus Christ, John

The Lord does not talk about theories of poverty and riches but rather goes straightforwardly to Assignment Service life. He requests that you desert what burdens your heart, to exhaust yourself of products with the end goal to prepare for him, the main great.