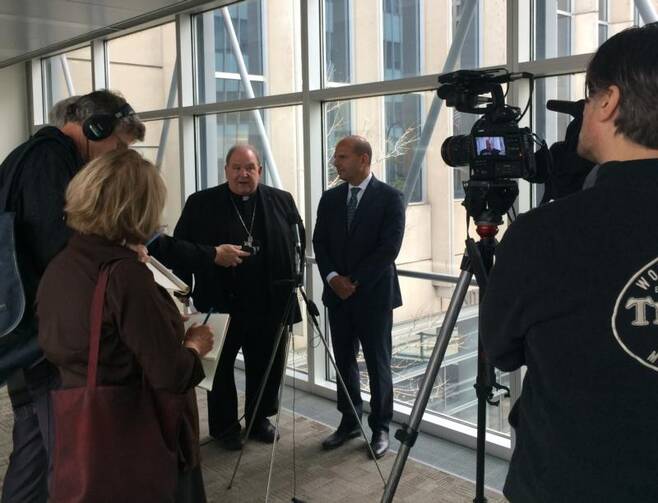 Archbishop Bernard A. Hebda of St. Paul and Minneapolis speaks to the media alongside Thomas Abood, chairman of the archdiocesan's finance council and reorganization task force. (CNS photo/Maria Wiering, The Catholic Spirit)

MINNEAPOLIS (CNS) -- A U.S. Bankruptcy Court judge Sept. 25 approved the reorganization plan of the Archdiocese of St. Paul and Minneapolis, including a $210 million settlement for victim-survivor remuneration.

During the hearing at the U.S. Federal Courthouse in Minneapolis, Archbishop Bernard A. Hebda gave a statement not as a lawyer, he said, but as the shepherd of the archdiocese.

"I need to say once again that I am truly sorry," he said. "I know those words -- as well as my promise of prayers -- may ring hollow for many and will never be enough. Still, I am so sorry for the horrific things done to you by people you should have been able to trust."

"As a bishop, as a priest, as a Catholic and as a human being, my heart aches when I think about the resulting harm to you, your families and so many others."

The archdiocese filed for Chapter 11 bankruptcy in January 2015 amid mounting claims of clergy sexual abuse following the Minnesota Child Victims Act, which lifted for three years the statute of limitations on historic claims of sexual abuse.

I am so sorry for the horrific things done to you by people you should have been able to trust.

In what U.S. Bankruptcy Judge Robert Kressel, who oversees the case, described as a "longer than expected" process during the hearing, the archdiocese and a committee representing victims/survivors filed competing plans in 2016. In December 2017, Kressel denied them both and ordered the parties to return to mediation. On May 31, they announced that they had reached a consensual plan.

In the settlement, $170 million is from insurance carriers, including $20 million from parish insurers. The archdiocese contributed $35 million from the sale of property, unrestricted cash, reserves not required to cover claims in its general insurance fund and benefits plan, board-designated funds and a pending estate settlement.

The archdiocese also will pay $1 million annually for five years to the trust established for distributing funds to victims-survivors.

Tom Mertens, the archdiocese's chief financial officer, testified during the hearing that the archdiocese is prepared to fulfill its commitment. A trustee appointed by the committee representing victims/survivors will determine the proportion of the funds each claimant will receive. A portion of the funds is expected to be distributed by year end.

The archdiocese will likely be formally discharged from bankruptcy in December.

More than 25 victims-survivors and their family members attended the hearing. In his testimony, Archbishop Hebda told them that their "persistence and courage have made a huge difference" in keeping children safe, and he thanked them "for helping our church change for the better."

"I hope this resolution brings some measure of justice to you," he said. "Yet, I know that no amount of money will make up for the horrors you experienced and the far-too-frequent failures by priests and bishops -- inexcusable failures that went on for way too long."

No amount of money will make up for the horrors you experienced and the far-too-frequent failures by priests and bishops.

He continued: "Many of you have told me how difficult it is to believe. I find that devastating. I personally find such strength in my belief in a God for whom nothing is impossible. I wear this cross as a reminder of that" -- he gestured to his pectoral cross -- "that the greatest good can come from the greatest evil."

He added, "It gives me hope that it is indeed possible for hearts to mend, suffering to ease and trust to return. As we take our next steps, be assured that that will be my hope and prayer for each of you who are survivors."

Jeff Anderson, a St. Paul attorney representing some of the victims-survivors, called the plan confirmation "a turning of a page" in survivors' journeys, and he told them they should feel like they have taken steps to protect children.

"You called us because you didn't want it to happen to others," he said. "I want all of you to own this and realize what this means in the long arc of our lives."

Bob Swiderski, 70, a clergy abuse survivor who grew up in Hector, said he reported his abuse to the archdiocese and the Diocese of New Ulm 39 years ago, "looking for help and answers." He didn't receive it, he said.

"Today was the first affirmation (of) that request that I've heard," he said of the confirmation hearing.

Wiering is editor of The Catholic Spirit, newspaper of the Archdiocese of St. Paul and Minneapolis.

80% of the settlement is coming from the insurance companies and only 16% from the archdiocese--that means not as much pain to the archdiocese are there should be.....and then to posture in front of the victims "that the greatest good can come from the greatest evil."........what an insult! what good came from Auschwitz? or from 1000 children molested by 300 clergy in PA? and then he finds disbelief "devastating"? His naivete is criminal.