The root of the China-Vatican agreement: Napoleon 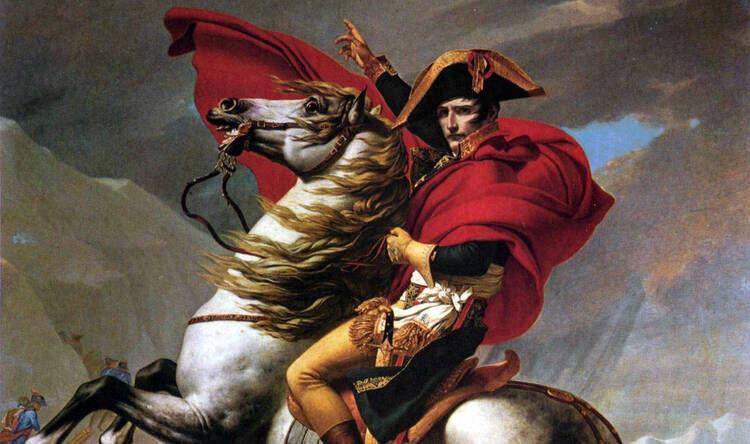 On July 12, 1790, in the first year of the French Revolution, the National Constituent Assembly passed the Civil Constitution of the Clergy. The Civil Constitution established a national Catholic Church in France subject to the government and not the papacy. As part of the Civil Constitution, religious orders were abolished, church property was seized, the number of dioceses were reduced and realigned, and bishops and pastors were to be elected locally by all those in their dioceses or parishes (laity included) who had sworn an oath of fidelity to the new constitution (and bishops and clergy were also required to swear allegiance). The authority of the pope over the appointment of bishops was reduced to the right to be informed of election results.

This arrangement was not all that different from the practice under the Gallican Church of the ancien régime, when bishops were effectively appointed by the king and the pope was informed and offered his imprimatur. Only in this latter case, the arrangement was one of longstanding, in which the papacy had acquiesced.

After the French Revolution, the authority of the pope over the appointment of bishops was reduced to the right to be informed of election results.

But the pope was not consulted at all about the new arrangements. The great majority of the French bishops and about half the clergy rejected the Civil Constitution, and refused to take the oath. The pope, Pius VI, joined in the condemnation of the Civil Constitution and the oath, and eventually excommunicated clergy (and the few bishops) who had agreed to it. This set up a division in France between the “jurors” and the “nonjurors”—that is to say, between those priests and bishops who accepted the Civil Constitution (and the effective independence of the church in France from the papacy) and the “nonjurors’” who remained loyal to the papacy. Over the course of the Revolution, almost all of the nonjuring bishops (who were also, in the main, aristocrats) fled France, and the nonjuring clergy went underground. In the most radical, anti-Christian phase of the Revolution, during the Reign of Terror, many of these nonjuring clergy were hunted down and imprisoned (and some sent to the guillotine), as were even some of the constitutional clergy who were insufficiently loyal to the Revolution.

With the Thermidorean Reaction, the Civil Constitution was abolished, but by this time the French church was effectively in schism, with rival claimants for many sees from the constitutional bishops in possession and the ancien régime bishops in exile or in hiding.

When Napoleon Bonaparte came to power as First Consul, early in 1800, one his goals was to restore religious unity and peace to France. He sought this goal not out of any personal religious conviction—he had notoriously said that if he were ruling a Muslim nation he would be a Muslim—but in order to strengthen his regime. Napoleon realized that for France, religious unity meant Catholicism. And to restore peace and unity to the church, he would need to deal with the papacy. Napoleon entered into negotiations with the newly elected pope, Pius VII, and the result was the Concordat of 1801, which governed the relations between the state and the French church until it was abrogated by the government in 1905.

Napoleon realized that for France, religious unity meant Catholicism. And to restore peace and unity to the church, he would need to deal with the papacy.

The Concordat of 1801 was an extraordinary document, both for what it conceded to the regime and for what it conceded to the papacy, both explicitly and implicitly. Most significantly, the Concordat recognized the ability of the pope to depose any bishop in France, whether of the Constitutional Church or of the ancien régime, and to appoint a new one, which Pius proceeded to do on a wholesale basis. Popes had deposed bishops before, but only for heresy or notorious immorality, and it was doubted by canonists that the pope could depose a legitimate bishop without cause: They were successors of the apostles. But Napoleon and the pope effectively reconstituted the entire French hierarchy. The government (i.e., the First Consul) nominated bishops, as had been the case in the ancien régime, but the pope got once again to approve them. These included some bishops of the schismatic Constitutional Church. Other provisions of the Concordat recognized and approved the new dioceses and the confiscation of church lands that had occurred in the course of the Revolution.

While these were obviously measures that favored the French state, they were undertaken with and by the authority of the pope, and against the opinion of defenders of the Gallican Church that the pope had no right to do either. The fact that from now on, bishops and priests would be paid by the French state in exchange for an oath of allegiance to the state also shifted the balance of power between church and state in favor of the latter, but they were welcomed by the papacy.

How did Vatican I change the church?
Jeffrey von Arx, S.J.

This was because the Concordat of 1801, although an instrument in Napoleon’s consolidation of power, was also a signal step in the emergence of the ultramontane papacy of the 19th century. It not only recognized but also gave effect to powers that the papacy had long claimed but had rarely been able to exercise. The exercise of these powers implied an understanding of the office of the pope that would be explicated and defined in the dogmatic constitution Pastor aeternus at the First Vatican Council in 1870 as his being the “ordinary and immediate pastor” of the universal church, who could appoint and depose bishops at will and negotiate directly with governments over the heads of national hierarchies.

The relevance of this history for the situation of the church in China and the agreement soon to be concluded between the Holy See and the Chinese government is in many ways obvious. Because of the Chinese Revolution, the Catholic Church in China has been for many years in schism, between the “underground” church and the government-recognized Patriotic Church. In order to heal the schism and bring the Patriotic Church back into communion with the papacy, Pope Francis has encouraged the resignation of some bishops in the underground church and recognized certain bishops of the Patriotic Church who had been excommunicated. The papacy has conceded a role both to the government and to local church representatives in the nomination of bishops, but it now has final approval over the bishops and official recognition from the government.

Of course, there are significant differences between the situation of the church in Napoleonic France and in the People’s Republic of China. In France, Catholicism was recognized, even by the government in the language of the Concordat as “the religion of the great majority of the French,” and so the church negotiated from a position of relative strength. Catholics in China are a tiny minority of the population. France was the “eldest daughter of the church,” and there was a long history of relationship between the papacy and the French state. In China, the relationship between the church and Chinese governments through the centuries has been checkered and tenuous. But both the Concordat of 1801 and the current agreement between the Vatican and the Chinese government were only possible on a certain understanding of the role, position and power of the pope in the church as ordinary and immediate pastor that became explicit in the negotiations between Pius VII and Napoleon Bonaparte.

So, the bishop of Rome has not been top dog or of unchanging status historically as fiercely believed by some Catholic fundamentalists.
No wonder his status as described during Vat I and during Vat II has been seen to be at such odds!
How diversely the Holy Spirit blows where it wills.

This article has calmed my reaction experienced when first told of what seemed capitulation to evil and betrayal of courageous faithfulness.

Well we'll see how this works out. Francis acknowledges that it will cause suffering, and I'm sure it will. China is not like France of the early 19th Century. Bonaparte was dealing with a Church that was an established powerful force in French society and linked to strong politicval opponents of the his regime. Our people in China are hardly that. They are a put upon and tiny nearly powerless minority whose message and independence the regime seems paranoid about. Probably for very good reason. Come what may regime is unlikely to ever concede much on the ultimate message and indepence if it is at all perceived as a threat to their "order". That's the way it is with totalitarians...even of this "red-capitalist" sort... a more refined version of Putin's state gangsterism. These are the types of principalities and powers that we are "dealing with" here. Like the optics of the Concordat with the Nazi's colored the perception of the church indelibly in all that followed, it is my fear that in the long run so will this deal. Maybe it will prove to be a long play that successfully waits these gangsters out with the Church and the Gospel flourishing in the end. But its quite a gamble played not with hosue money by the chips of the lives and faith of our brothers and sisters on the ground in China. Pray for them. They are going to need it.