Pope Francis to Chinese Catholics: The church is praying for you “in the midst of difficulties” 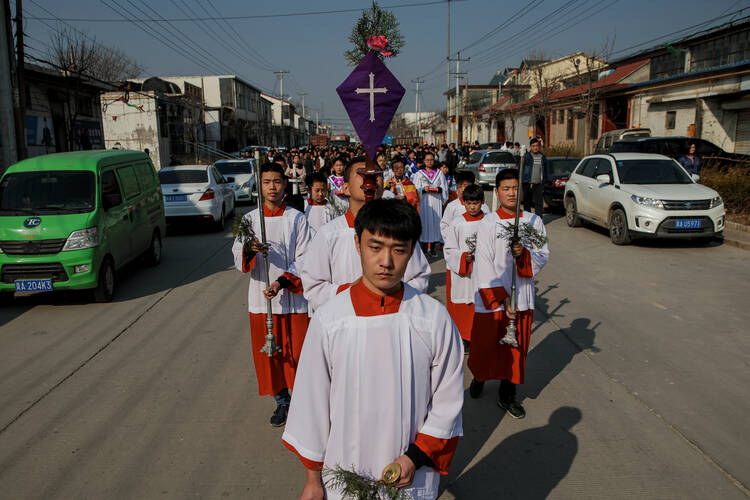 Pope Francis sought today to encourage an estimated 12 million Catholics in mainland China by assuring them that “the universal church prays with you and for you, so that even in the midst of difficulties, you may continue to entrust yourself to God’s will.”

He assured Chinese Catholics that “Our Lady will never deprive you of her help and will protect you with her motherly love.”

He sent them this message on the eve of the biggest Marian feast in China, that of the Blessed Virgin Mary, “Help of Christians,” who, he said, “is particularly venerated at the sanctuary of Sheshan,” not far from the city of Shanghai on May 24 each year.

His predecessor, Pope Benedict XVI, seeking to unite the universal church more closely to the church in China, decreed in his 2007 “Letter to Catholics in China” that May 24 be celebrated worldwide as “a day of prayer for the Church in China.”

The pope appeared to be alluding to the fact that since February there has been a crackdown by the Chinese authorities on religion in the mainland.

In his message today, Francis’ use of the words “in the midst of difficulties” was particularly significant. He appeared to be alluding to the fact that since February there has been a crackdown by the Chinese authorities on religion in the mainland, including on Christians and the Catholic Church, especially through the strict enforcement of regulations that prohibit anyone under the age of 18 from attending church or other religious services, receiving religious education or catechesis, or participating in any kind of religious event.

The regulations impose heavy penalties on anyone who defies them. This would mean that parents who take their children to church or to a religious education class or to any other religious-linked event will be penalized, as would young people who engage in any kind of religious event.

This prohibition strikes at the very heart and future of the Catholic and other Christian churches, as well as that of other religions. It is an issue of utmost concern for Catholics in China who see it as an attempt by the communist authorities, under President Xi Jinping, to prevent young people from being educated or growing up in the faith. It is the most striking evidence to date that the Chinese authorities at the highest levels fear religion.

Sources in Rome told America that the Vatican is deeply concerned about this negative development, which comes at a moment in which after four years of negotiations the Holy See seems close to reaching an historic agreement with the Chinese authorities on the appointment of bishops in the mainland. Though it has not yet said so publicly, the Vatican considers the new regulations that prohibit young people from practicing or being educated in their faith as a distinctly unfriendly gesture that is not in harmony with Beijing’s insistence that it is “sincere” in its desire to improve relations with the Holy See. The pope’s carefully chosen words today give expression to this great concern of the Holy See and the church in China.

Francis, who has made every effort since becoming pope to establish good relations with China, made his remarks at the end of the public audience in St. Peter’s Square attended by thousands of pilgrims from many countries on May 23, on the eve of the feast of Our Lady of Sheshan.

The feast is popularly known as that of “Our Lady of Sheshan, the protector of China.” Her famous statue, which stands on top of the church at Sheshan, shows Mary holding the child Jesus high over her head to show him to the world. Since 1873, when it was first placed there, the statue has attracted millions of pilgrims from all over China, especially in the month of May. But in recent years, authorities have sought to dissuade Catholics from making this pilgrimage.

Pope Francis told the pilgrims in St. Peter’s Square that “this observance invites us to be spiritually close to all the Catholic faithful that live in China.”

He invited the pilgrims and Catholics worldwide to “pray for them to Our Lady so that they may be able to live their faith with generosity and serenity and that they may know how to make concrete gestures of fraternity, harmony and reconciliation, in full communion with the Successor of Peter.”

He is aware that right now there is a mixture of hope but also some concern and tension among many Catholics in mainland China regarding the agreement the Holy See is seeking to reach with Beijing; they wonder—especially those in the unofficial church community—what this accord may mean for them.

With this last remark, Francis was expressing his hope and wish that Catholics of “the underground church” community and those of the “open” or state-recognized church community “may be able to live their faith with generosity and serenity” and would be able to find ways “to make concrete gestures of fraternity, harmony and reconciliation” among themselves but doing so “in full communion” with the pope—“the Successor of Peter.”

Pope Francis concluded his statement by assuring Chinese Catholics that “Our Lady will never deprive you of her help and will protect you with her motherly love.”