Pope Francis prays for victims of abuse, for families and for peace in Northern Ireland at Knock 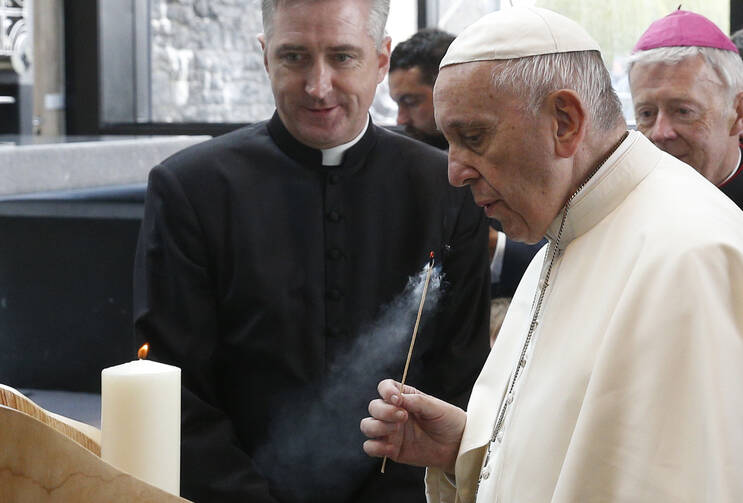 Pope Francis visits the Chapel of the Apparitions at the Knock Shrine in Ireland, Aug. 26. (CNS photo/Paul Haring)

Pope Francis traveled to the Marian shrine of Knock in Ireland’s County Mayo on this rainy Sunday morning and offered prayers for the victims of abuse, for families and for peace in Northern Ireland, three themes that have been at the center of his visit to the emerald isle.

After praying in silence for some minutes in the Chapel of the Apparitions at Knock, Pope Francis gave a brief talk to the 45,000 pilgrims present in which he mentioned all three themes. He had already spoken about them in his first major talk to the civic and religious authorities of this island of 7 million people soon after arriving in Dublin yesterday, Aug. 25, for the World Meeting of Families.

Knock is a popular pilgrimage site and shrine in Ireland. In 1879, local residents reported seeing an apparition of Mary the Mother of God, St. Joseph, St. John the Evangelist, a lamb and many angels at Knock. It soon became known as well for miraculous cures. In 1979, Pope John Paul II visited the shrine to celebrate the centenary of the apparitions.

Pope Francis told those present at Knock and millions more watching the live broadcast on national television: “In the Apparition Chapel, I lifted up to Our Lady’s loving intercession all the families of the world, and, in a special way, your families, the families of Ireland.” He told them that “Mary our Mother” who “knows the joys and struggles felt in each home” holds these families “in her Immaculate Heart” and “brings them with love to the throne of her Son.”

Referring to the victims of abuse, Francis said, “In my prayer before [Mary’s] statue, I presented to her in particular all the victims of abuse, of whatever kind committed by members of the church in Ireland.” Indeed, he said, “None of us can fail to be moved by the stories of young people who suffered abuse, were robbed of their innocence and left scarred, distanced from their mothers, abandoned and left with painful memories.”

His comment on the removal of children from their mothers had a special significance for residents of Ireland’s rural west. Sources told America that Francis was aware that less than an hour’s drive from the Knock shrine is the notorious Mother and Baby Home at Tuam, where 796 infants and young children died in the decades around the middle of the 20th century. Their treatment at the home and the condition of their burial have become questions of a now-internationally known story, and the Irish government has opened an investigation seeking to establish what actually happened.

Pope Francis at Knock: "I ask our Blessed Mother to intercede for the healing of the survivors of whatever kind, and to confirm every member of our Christian family in the resolve never again to permit these situations to occur.”

Referring to the many forms of abuse that children and women suffer, Pope Francis said, “I beg the Lord’s forgiveness for these sins and for the scandal and betrayal felt by so many others in God’s family. I ask our Blessed Mother to intercede for the healing of the survivors of whatever kind and to confirm every member of our Christian family in the resolve never again to permit these situations to occur.”

Francis is expected to speak again about the abuse scandal in his talk to the bishops of Ireland today and possibly also in his homily at a Mass before hundreds of thousands of people in Dublin’s Phoenix Park this afternoon.

Before reciting the Angelus with those present at Knock, Pope Francis turned also to the situation in Northern Ireland, where a lasting peace has been imperiled by governmental failures to form a new executive administration, and where full reconciliation is still a goal instead of a reality.

He said his pilgrimage to Knock provided him with the opportunity to give “a warm greeting to the beloved people of Northern Ireland” who are not many miles away. He assured them of “my affection and my closeness in prayer” and told them, “I ask Our Lady to sustain all the members of the Irish family to persevere, as brothers and sisters, in the work of reconciliation for the children of today, whether they are Muslim, Jew or of whatever religion because they are all children of Ireland.”

He expressed gratitude “for the advance of ecumenism, and the significant growth of friendship and cooperation between the Christian communities” of Northern Ireland: “I pray that all Christ’s followers will support the continuing efforts to advance the peace process and to build a harmonious and just society for today’s children.”

After praying with the pilgrims and giving them his blessing, Francis took a plane back to Dublin where he will celebrate mass for an estimated half a million people this afternoon in Dublin’s Phoenix Park.