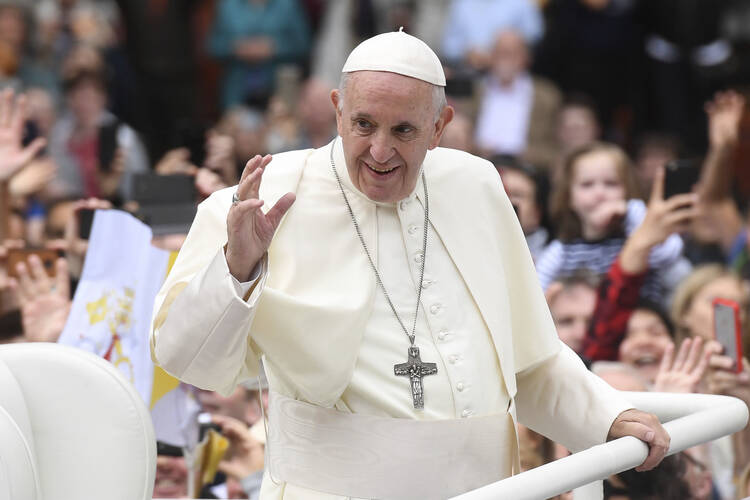 Pope Francis waves to the waiting crowds on College Green, Dublin, as he travels in the Popemobile during his visit to Ireland on Aug. 25, 2018. (Joe Giddens/PA via AP)

When Pope Francis arrived in Ireland Saturday morning, the comparisons to the visit of Pope John Paul II in 1979 were inevitable.

A little more than a year after his August 1978 election as pope, John Paul II disembarked an Aer Lingus Boeing 747, nicknamed, “St. Patrick,” on Sept. 29, 1979, and kissed the ground at Dublin airport. After being greeted by the President of Ireland Patrick Hillery, Pope John Paul II flew by helicopter to Dublin’s Phoenix Park, where he celebrated Mass for more than a million people. It remains the largest gathering in the Republic of Ireland’s history.

Pope Francis’ arrival in Ireland for the World Meeting of Families had a remarkably different tone, taking place in the shadow of over two decades of sexual abuse scandals within the Irish church. The Pennsylvania grand jury report, released shortly before the pope’s visit, brought a new sense of urgency to the issue of sexual abuse and resonated deeply with the Irish public. The Vatican confirmed that the pope would meet with survivors of sexual abuse during his time in Ireland, though the time and location were not disclosed.

The pope was greeted at the airport by Ireland’s Deputy Prime Minister Simon Coveney and other representatives of the state, as well as the country’s Catholic leaders, including the leader of the Catholic Church in Ireland and Archbishop of Armagh, Eamon Martin, Cardinal Seán Brady, and the Archbishop of Dublin, Diarmuid Martin.

They were joined by Cardinal Kevin Farrell, who was born in Ireland and previously served as Bishop of Dallas before being appointed head of the newly-established Vatican Dicastery for Laity, Family and Life in 2016. The pope was also greeted by the Boland family from Dublin, who represented the World Meeting of Families taking place this week.

After the abuse scandals, “a need for real healing”: An interview with Ireland’s Liz Murphy
Gerard O’Connell

The greeting was short, with only a few minutes in the pope’s schedule for the airport arrival, before a waiting Skoda Rapid sedan brough the pope to Áras an Uachtaráin, the president’s residence. He was then taken to Dublin Castle for a civic reception, where Ireland’s Prime Minister Leo Varadkar gave a speech that outlined the social changes that had occurred since Francis’ predecessor visited Ireland.

Though Ireland remains a predominantly Catholic country, with 78 percent of the Republic identifying as Catholic in the 2016 census, the nature of belief has changed. When Pope John Paul II visited Ireland, divorce was illegal, as was homosexuality. Same-sex marriage was legalized by referendum in 2015, followed by two thirds of the population voting to repeal a constitutional ban on abortion in May of this year.

Following the latter result, Archbishop Eamon Martin told RTÉ Radio that it confirmed the church was in a “new space” in Ireland, though this was not something that came “out of the blue.”

Over the past 20 years, the scale of institutional abuse in Ireland has been revealed through a number of criminal cases and government inquiries, including the “Commission to Inquire into Child Abuse,” the “Report of the Commission of Investigation into the Catholic Archdiocese of Dublin,” and “The Ferns Report.”

Pope Francis had to note the many protests that followed along his parade route in Dublin. Outside Dublin Castle a group held a banner that read, “We Will Never Forget,”’ and chanted “Keep our children safe.”

Several groups planned public protests over the weekend because of the various abuse scandals and the church’s handling of them. High-profile critics of the church, including Ireland’s former President Mary McAleese, a practicing Roman Catholic, have called for greater accountability for abusers and reparation for victims. Ms. McAleese has also called for greater compassion within the church, including toward L.G.B.T.Q. members of the faithful.

Mr. Varadkar addressed the weight of the scandals in his speech at Dublin Castle and the “shared mistakes and responsibilities” of the state and the Vatican. Pope Francis followed by addressing the abuse in his speech on Saturday afternoon, acknowledging the “grave scandal caused in Ireland by the abuse of young people by members of the Church charged with responsibility for their protection and education,” and the “pain and shame” it caused in the Catholic community. He expressed his commitment to end the culture of abuse and coverup.

The Ireland that Pope John Paul II visited in 1979 was undoubtedly more favorable to the Catholic Church, but it was also one later revealed to be highly hypocritical. One famous image from the first papal visit is from Ballybrit Racecourse in Galway. It shows Bishop Eamon Casey and Father Michael Cleary entertaining the jubilant crowd before the pontiff’s arrival. Both men were later revealed to have fathered children and were at the center of the first prominent sexual scandals in the church in the early 1990s.

During his speech, Mr. Varadkar spoke of a new and more mature relationship between Ireland and the Catholic Church, learning from mistakes and working together to help victims of abuse. He also spoke of the remarkable progress that has been made. In 1979, the conflict in Northern Ireland prevented Pope John Paul II from making a planned trip north of the border. It has now been 20 years since the Good Friday Agreement signaled an end to the conflict, and Varadkar expressed his hope that Pope Francis can one day fulfill the journey his predecessor was unable to make.

On Sunday, Pope Francis will end his visit by celebrating Mass in front of an expected crowd of half a million people in Phoenix Park, the largest gathering since John Paul II’s Mass in 1979. The huge anticipated turnout indicates that the Catholic Church remains a central part of Irish society, though the nature of the faith and its people have changed.

On Sunday, Pope Francis will end his visit by celebrating Mass in front of an expected crowd of half a million people in Phoenix Park.

There was tight security in place for the route through the city, with police stationed every 20 or 30 meters along the route. Many in the crowd were holding papal and Irish flags. One woman on the route who was present for Pope John Paul II’s in 1979, described the experience as a “miracle,” adding, “I won’t say I have pity for him, but I like to support him because he’s having a difficult time.” Gerard Cunningham, who travelled from Britain for the visit, said he looked forward to Sunday’s papal Mass as an experience of the reach and universality of the church.

Caroline and Ryan Feeney from Belfast were among the couples who met with Pope Francis as he visited St. Mary Pro Cathedral in Dublin on Saturday afternoon. “Obviously we were proud to travel down here,” Caroline said. “But we also asked Pope Francis to continue to pray for peace and stability in Northern Ireland...and his answer really struck me because he said that he would do that, but he also said to Ryan and I, ‘Pray for me too,’ and this speaks to what a humble pope we have and what an inspirational man he is, that in a time of change in the Catholic Church, he’s reaching out to lay people and asking them for their prayers.”

Pope Francis had to note the many protests that followed along his parade route in Dublin. Members of “We Are Church Ireland” protested on the city’s historic Ha'penny Bridge. Outside Dublin Castle, where Pope Francis earlier delivered his address, a group held a banner that read, “We Will Never Forget,”’ and chanted “Keep our children safe,” in reference to the church’s sexual abuse scandals. In front of them were dozens of pairs of baby shoes and teddy bears. As the pope passed, the group booed loudly.

More protests are planned for Sunday. Historian Catherine Corless, whose work uncovered a mass unmarked grave near a former Mother and Baby Home in Tuam, Co. Galway, refused an invitation to the Dublin Castle event and told Irish media that she would be attending a vigil in Tuam on Sunday, one of a number of events taking place during the papal mass as counterpoints to the pope’s visit. Ms. Corless has discovered that nearly 800 children and infants had died in the early and mid-20th century in the Tuam homes. Victims of clerical abuse are also due to gather Sunday in Dublin’s Garden of Remembrance, a national memorial to those who died in the Irish struggle for independence.