When Peace Came to Ireland: The lessons of the Good Friday Agreement 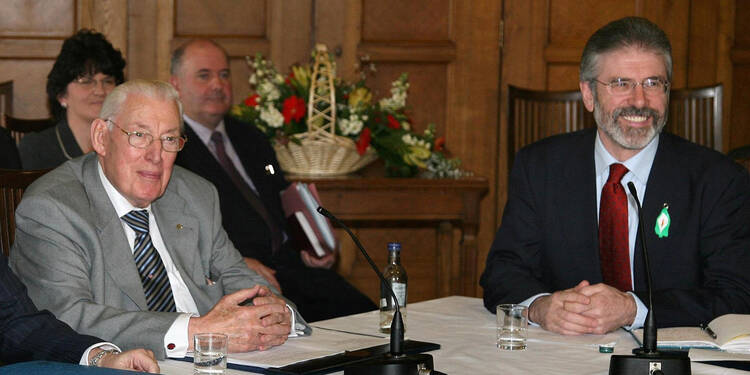 Ireland’s modern day “Troubles” commenced in the 1960s and brought murder, destruction and occupation to many parts of Northern Ireland. “With their tanks and their guns, my God what have they done to the town I loved so well,” wrote the Irish songwriter Phil Coulter. Between 1969 and 2001, 3,526 people were killed as a result of the conflict. Many multiples of that were wounded, victimized and traumatized. During the darkest days of the Troubles, a despairing Jesuit once said that the only hope for Northern Ireland was that it be converted to Christianity. Sean O’Casey’s powerful play “Juno and the Paycock” captures the sufferings and passions of bereaved family members, the living victims of conflict:

Sacred Heart o' Jesus,
take away our heart's o' stone
and give us hearts of flesh!
Take away this murdherin hate,
an' give us Thine own eternal love.

But out of the darkness and despair came light and leadership, courage and commitment. Hope eventually prevailed against history through the determined, courageous efforts of men and women from both communities—Catholic and Protestant—and both traditions, Nationalist and Unionist, as well as the diplomatic efforts of the Irish, British and U.S. governments—not to mention the tremendous support of Irish America. Irish Americans made countless trips to Ireland throughout the Troubles urging peace and reconciliation.

Space does not permit an expansive reflection on the turbulent years leading up to the signing of the 1998 Good Friday Agreement in Belfast; but its antecedents lie in the 1993 Downing Street Declaration issued on December 15, 1993 by British Prime Minister John Major and Taoiseach Albert Reynolds. That declaration introduced the principle that the people of the island of Ireland—north and south—had the exclusive right to solve the issues between north and south by mutual consent and also stated that the British Government had no “selfish strategic or economic interest” in Northern Ireland.

The Hume-Adams Initiative in 1994 was the catalyst for ultimately bringing all paramilitaries in from the cold and taking the gun out of politics. Both John Hume and Gerry Adams displayed great personal, political and physical courage when it was most needed.

What is the Good Friday Agreement?

Simply stated, the Good Friday or Belfast Agreement is a power sharing agreement that stipulates that the future of the island will be based on the principle of consent of its people—meaning all parties agreed to use “exclusively democratic and peaceful means of resolving differences on political issues.” This meant decommissioning of weapons and the normalization of security arrangements—the demilitarization of Northern Ireland.

The Good Friday Agreement has brought peace and political stability to Northern Ireland after years of bitter violence. Today, Northern Ireland is a much better, safer and more vibrant place than it was in 1998 and for many previous generations. It has a bright future; Ireland has rightly achieved the reputation of global leadership in the field of peace-building. According to Sinn Fein leader Gerry Adams, “The power-sharing structures have ensured the checks and balances necessary to prevent the political abuses and discrimination of the past. The agreement has secured remarkable progress in the areas of policing and justice, demilitarization and arms, discrimination and sectarianism, equality and human rights, and the Irish language."

Think of it. Peter Robinson, a founding member of the Democratic Unionist Party (DUP) is now First Minister of the Northern Ireland Executive along with Deputy First Minister Martin McGuiness, a former senior leader of the Provisional IRA—a real example of a power sharing government. As Nelson Mandela once told Martin McGuinness, “You don’t make peace with your friends. You make peace with your enemies.”

Think of it. Martin McGuiness has shaken hands with the Queen—and the Queen with McGuiness. I personally watched the unimaginable chemistry between Ian Paisley and Martin McGuiness, which led the media to call them for a time the “Chuckles Brothers.”

The failures of local leaders, however, to tackle sectarianism, promote integration between Catholic and Protestant communities and to adequately address the legacy of the past are significant lingering problems. There are unfortunately more peace walls—huge physical barriers separating communities—in Belfast today than when the Good Friday agreement was signed. Northern Ireland has found peace, but reconciliation and tranquility in a shared society remains a more elusive goal.

Noting that April 11th of this year also marked the 50th anniversary of Pope John XXIII’s encyclical “Pacem in Terris,” the Irish Catholic Bishops Council for Justice and Peace said both anniversaries “underline the crucial role of human rights in ending violent conflict.”

Only long-term solutions “founded on the values and approaches outlined in ‘Pacem in Terris’—dialogue, respect for human dignity, promotion of human rights and acceptance of our corresponding duties—can bring hope to those people in Ireland and throughout the world who are suffering as a result of violent conflict.”

Shall I ask the brave soldier who fights by my side,
In the cause of mankind,
if our creeds disagree?
Shall I part from my friend,
both valued and tried,
If he kneels not before the same altar with me?”

Once again this past year, contentious issues of national and cultural identity exacerbated tensions. Bitter disputes over measures to restrict the flying of the Union Jack flag over Belfast City Hall erupted into street riots in certain Unionist neighborhoods and celebrations in certain republican neighborhoods at the death of Margaret Thatcher inflamed many Unionists. Divisions survive and thrive; they are exploited by a small minority opposed to the peace process, as well as criminal elements. Death threats are regrettably still made.

It is a reluctant, imperfect peace but it is peace nonetheless. It will hold and last. But it does require considerable attention, hard work and nourishment. Complacency is an enemy of the hard won peace. Despite horrific attempts to derail it, such as the Omagh bomb that killed 29 people five years after the signing of the agreement, the process has survived. Peace and its dividends are already embedded deep in the hearts and minds of a great majority of the people of Northern Ireland. There is no going back.

All four of my grandparents came from Ireland and my father’s doctoral thesis at Fordham on monasticism led him to share with his six children his belief that the Irish monks indeed saved civilization long before Thomas Cahill’s excellent book on the subject. However, it was as a young naval officer riding home from DaNang, Vietnam in 1969 on an Air Force cargo plane that the seeds of my journey were first planted. During the 18-hour ride home, my knees kept touching our cargo: nine coffins. Nine of us came home alive, nine dead. The randomness of fate! There had to be a better way.

Nobel Laureate John Hume’s strong belief that it was better to live for Ireland than die for Ireland held strong attraction for me. So was his philosophy of non-violence and civil disobedience, which was heavily influenced by his hero, Martin Luther King, Jr. I marched on Washington D.C. with Martin Luther King in 1963 as a college student at Holy Cross. To this day I remain very comfortable with the Hume path to an “Agreed Ireland” that I chose to follow. The spirit of reconciliation encourages me and countless other Hume disciples to pass no judgment today on those who chose different paths.

In the earliest days of the peace process, I remember the extreme skepticism here and abroad about the likelihood of the Provisional IRA and its political wing Sinn Fein keeping their promises about decommissioning weapons and renouncing violence. Despite some bumps along the road, to the everlasting credit of Gerry Adams and Martin McGuiness, those promises were kept. Their courageous leadership has helped make peace possible. Unfortunately their reward in some quarters has been abuse and threats from dissidents and criminal elements. Irish America must stand strongly behind them.

But just as Adams and McGuiness deserve great credit, so do a number of Unionist and Loyalist leaders who supported the Good Friday Agreement or the institutions it created against hardline naysayers and rejectionists in their own community. The underlying ethos of the agreement is equality, parity of esteem and mutual respect. That is a two way street and we in Irish America need to remember that.

During these days of dysfunctional government in Washington, D.C., there is one aspect of the peace process that receives too little attention. Presidents Clinton, Bush and Obama together with the Congress have conducted a largely bi-partisan foreign policy in their approach to the Irish peace and reconciliation process. While President Clinton rightly receives enormous credit for his role in the Irish peace process, together with his Special Envoy George Mitchell, I can personally attest as a lifelong Democrat to the very constructive bi-partisan supportive approach to the peace process that President George W. Bush took through his Special Envoys Ambassadors Richard Haas, Mitchell Reiss and Paula Dobriansky. Our country needs more of that today.

Looking back on almost 30 years of involvement with the affairs of Northern Ireland, I find myself in agreement with George Mitchell who said, “I’m an American and proud of it but a large part of my heart and emotions will always be in Northern Ireland and with the people there.” How can you help the ongoing peace and reconciliation process? Perhaps St. Augustine will inspire: “Pray as if all depended upon God and work as if all depended upon self.” My words will be quickly forgotten but perhaps when you are at Sunday Mass sometime and hear the beautiful ancient Irish hymns “The King of Love My Shepherd Is” or “Be Thou My Vision,” then you will sing a special prayer to the Lamb of God for peace and reconciliation on the island of Ireland.

John V. Connorton Jr. is a partner in the law firm of Hawkins, Delafield & Wood in New York City. In recognition of his efforts on behalf of peace in Northern Ireland, Queen Elizabeth II named him an honorary Commander of the Most Excellent Order of the British Empire. This article is adapted from a talk to the Friendly Sons of Saint Patrick of New York City on May 6, 2013.