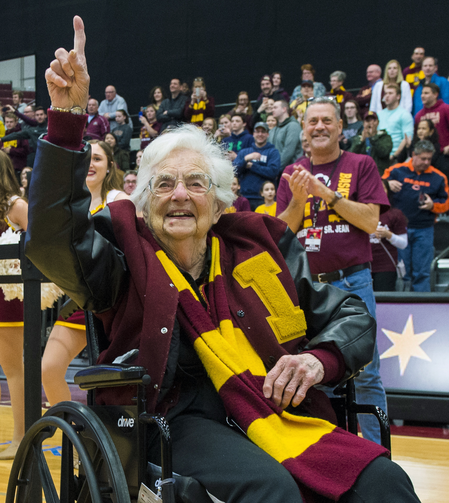 The university held a campus party with students and school staffers Tuesday for Sister Jean Dolores Schmidt. The Catholic nun became a celebrity last March for her fandom and for praying before each game for her Ramblers — and for their opponents.

Schmidt says her health is better some days than others as she's been recovering since last year from a broken hip. She received a number 99 basketball jersey and a birthday cake frosted in the team's maroon and gold colors.

Players say they're still inspired by her example.

1
How can I reconcile the good and evil of Jean Vanier?
Colleen Dulle
2
Internal report finds that L’Arche founder Jean Vanier engaged in decades of sexual misconduct
Michael J. O’Loughlin
3
Super Tuesday is a week away. Here are 6 takeaways from Bernie’s win in Nevada.
Robert David Sullivan
4
Pope Francis recognizes the martyrdom of Jesuit Rutilio Grande and two lay companions in El Salvador
Gerard O’Connell
5
What is the official church teaching on homosexuality? Responding to a commonly asked question
James Martin, S.J.