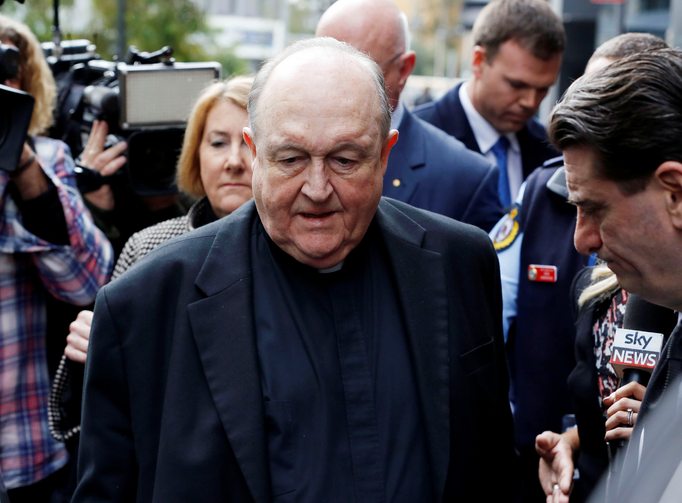 Pope Francis has accepted the resignation of the Archbishop Philip Wilson of Adelaide, 67, who was found guilty by an Australian magistrate and given a 12-month prison sentence for failing to inform police about allegations of the sexual abuse of minors by a priest in the 1970s.

The magistrate is expected to decide on Aug. 14 if the archbishop is suitable for home detention.

The Vatican and Archbishop Mark Coleridge, the president of the Australian bishops’ conference, broke the news of the resignation. Many people in Australia, including Prime Minister Malcolm Turnbull, called on the archbishop to step down, and several of his fellow bishops privately counseled him to do so. Archbishop Wilson, on the other hand, said he refused to resign until the result of his appeal was decided. He did, however, step aside from his duties as archbishop, and Pope Francis immediately appointed an apostolic administrator, Bishop Gregory O’Kelly, a Jesuit, with executive responsibility for running the diocese.

Archbishop Wilson’s resignation was long expected and, while it is not clear if Rome actually asked for it, its immediate acceptance, like that of Cardinal Theodore McCarrick’s on Saturday, sends a clear signal that Pope Francis is determined to deal in an unequivocal manner with all cases involving bishops that relate to the abuse of minors or vulnerable adults. In June, the pope accepted the resignations of several Chilean bishops following a papal investigation into the cover-up of sexual abuse there.

Archbishop Wilson is the highest-ranking Catholic bishop to be convicted and sentenced for failure to report a case of abuse.

In a statement sent to the media on July 30, Archbishop Coleridge said Archbishop Wilson’s “decision to resign comes after considering his future following his conviction for failing to report allegations of child sexual abuse that occurred in the 1970s” and that “he has decided that his conviction means he can no longer continue as archbishop because to do so would continue to cause pain and distress to many, especially to survivors, and also in the Archdiocese of Adelaide.”

Archbishop Wilson, a former president of the Australian Catholic Bishops Conference, is the highest-ranking Catholic bishop in the world to be convicted and sentenced for failure to report a case of abuse. He has always protested his innocence and has appealed his conviction.

In his statement today, Archbishop Coleridge said that “while the judicial process will continue, Archbishop Wilson’s resignation is the next chapter in a heartbreaking story of people who were sexually abused at the hands of Jim Fletcher and whose lives were forever changed. This decision may bring some comfort to them, despite the ongoing pain they bear.”

He added that “Archbishop Wilson has been praised by many for his work to support victims and survivors of child sexual abuse as bishop of Wollongong, archbishop of Adelaide and president of the bishops conference.”

On May 22, an Australian magistrate in Newcastle court, New South Wales, Robert Stone, found Archbishop Wilson guilty of failing to inform police about allegations of the sexual abuse of two altar boys by Father Fletcher in the 1970s. He did so after hearing testimonies from the survivors and the archbishop, who categorically denied being told about the abuse. Father Fletcher was found guilty of nine counts of child sexual abuse and sentenced to eight years in prison in 2004, but two years later he suffered a stroke and died in jail.

The blog was absolutely incredible. Lots of extraordinary information which can be helpful in a few or the other way. Continue refreshing the blog, looking forward for more contents. Incredible job and keep it up. I get a kick out of the chance to share these sorts of articles to my friends who like to read the websites for increasing great contemplations and information. http://bit.ly/2GSNQ6V

As a clergy abuse survivor of an RSCJ (women religious) in Bloomfield Hills, Michigan in 1969, I dare say the cover-up is what causes most of the damage... When I “came forward” in 1990 everyone in my school community of former beloved teachers and classmates rallied around my abuser and ostracized me completely because she immediately lied about it all. The shame and negative feelings were poured onto me. I suffered, and still suffer, everything my abuser should be suffering to this day. But not... She is still being awarded and honored for her service. What a joke! What a Tragedy.

Sheila, I'm very sorry that you suffered sexual abuse at the hands of a religious sister, and that you continue to suffer because she lied about the abuse. It's particularly sad and tragic that your former teachers and classmates "rallied around" your abuser, and that she continues to receive honor and awards. Have you ever gone to a therapist or perhaps a psychiatrist to receive counseling to discuss your being abused and hopefully to have received some consolation and a sense of healing? I certainly realize that your being sexually abused is a matter of tremendous tragedy, more so than my great unhappiness and depression growing up gay in the 1970,'s. However, I was fairly frequently called a painful term by some people, but when I revealed my sexual orientation to my family, friends, and co-workers in 1994 I generally received considerable support and love. Nevertheless, I did for some time see a superb psychiatrist to discuss my depression due to being gay. Although I still have some difficulties, due to my orientation, I received much assistance both from the psychiatrist and from seeing a compassionate priest for forgiveness through the Sacrament of Reconciliation. Again, I realize that my past pain pales in comparison to your great suffering from being sexually abused and not having been supported by your former teachers and classmates. I hope you've been able to recover emotionally from your abuse. I wish you all the best.

Sheila and Tim, no-one can send us to Hell as our free choices, and those alone are counted as sin deserving eternal punishment in the next life. Then again, we cannot save ourselves from the world, the flesh and the devil but we have it from Jesus Himself that He came to save us and succeeding in establishing all that is needed to do so except force it upon us against our will.

All the way though from infancy until University graduation I was within the sphere of influence of the community gathered together as the fellowship of believers in the life, death and resurrection of the Messiah in suburban Sydney, Australia.

During that time, I experienced and observed much cruelty and abuse. None of it was overtly sexual.
The nun who punished a pair of little boys just out of kindergarten by sitting them over the side of the classroom on wooden vegetable crates to be objects of public shame and humiliation day after day.
The piano teacher nun who used the edge of a large wooden ruler to crack the knuckles of her little, fragile, delicate primary school pupils assigned by their parents to learn how to play music. A nun from a different order terrorising one of my little sisters who was left handed to almost a nervous breakdown by forcing her to function right handed. The late primary school teacher in a religious order who held spelling tests of 25 words. He then corrected them. He then made everybody who had made a spelling mistake to "line up for the Hit Parade, up the centre and down the aisles!" and get one cut of a stout, heavy cane for every mistake made. One boy misspelled every word ...
In a Catholic boys only High School forcing a boy to go to choir practice instead of being able to do senior maths knowing full well he was aiming to be a scientist. A different Catholic brother caning a boy on his first day back from school after being seriously ill because he sought the cool shade of a tree during a blazing hot summer day, the new rule against sheltering in the shade had been announced while the boy was away ill.

I used to wonder, these people go to Mass and Holy Communion every day, they pray in common at least three times daily and they represent Our Lord Jesus Christ to us as children - how can they not see what they are doing?

"a clear signal that Pope Francis is determined to deal in an unequivocal manner with all cases ..."--unequivocal? really? this no-brainer is somehow an exceptional act by the Pope? --what were his other options?
.....“he has decided that his conviction means he can no longer continue as archbishop because to do so would continue to cause pain and distress to many, especially to survivors....." really? he is convicted of a crime and he still thinks he is making a personal sacrifice for the good of others? All of these guys, whether McCarrick or Wilson, they just don't get it! RCC is not just a bad case of folie a deux, but folie a many---all of these defective people reinforcing each other's perversions and delusions, with a theology that gives them a vocabulary that allows them to contradict reality! RCC is in the grip of a real institutional psychosis that seriously clouds its judgement---yet we still read stuff like this that tries to claim that the church can heal itself, if only this Pope would make the big decisions.This Pope has never been able to get out in front of the problem and has been running from behind all the time.

Two different crimes with vastly different implications. No, we do not think that the institutional church can heal itself, we believe that the Holy Spirit will continue to work within it to bring about the sovereign will of Almighty God.
The church is being cleansed ... the goats are being separated from the sheep.
We know that in any institution there will be home grown traitors and fifth column infiltrators and that all the rest of us are sinners. Only unrealistic and impractical idealists picture perfection on earth as possible or desirable.