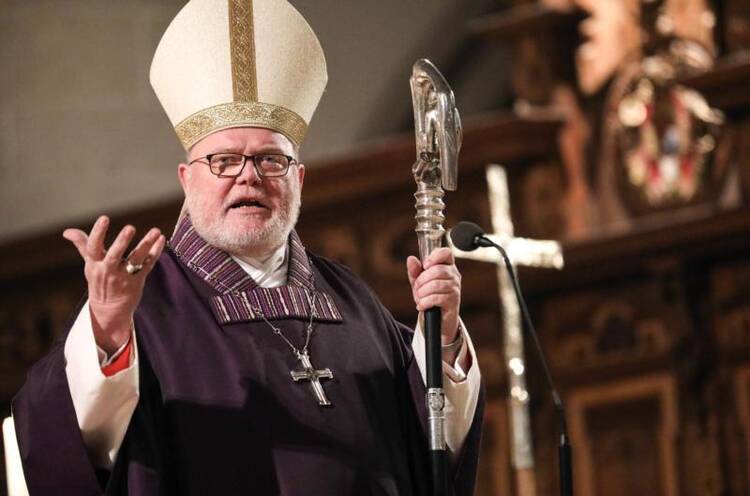 Cardinal Reinhard Marx of Munich and Freising speaks during the opening service of the plenary meeting of the German bishops' conference in Ingolstadt, Germany, Feb. 19. Six German bishops will meet May 3 with Vatican officials to discuss German plans to allow greater access to the Eucharist for Protestants married to Catholics. (CNS photo/Markus Now, KNA)

WASHINGTON (CNS) -- The German bishops' conference said when the bishops meet in September, they will continue to examine the issue of Communion for Protestant spouses of Catholics.

The bishops published an "Orientation Guide in the Responsibility of Individual Bishops" June 27. According to DomRadio, the official news site of the Diocese of Cologne, the guide is the same handout that the bishops' conference developed in February, but with a changed title.

Although it is published, the document is not readily available for public viewing.

German bishops met with curial officials at the Vatican in early May and, afterward, Pope Francis asked them not to publish the guidelines.

Pope Francis clarified his position on the matter during a flight from Geneva to Rome June 21. He said the problem was not the subject matter of the debate, but rather the bishops' approach to create new norms for the German Catholic Church at a national level.

He said the guidelines the bishops were attempting to create went beyond what is foreseen by the Code of Canon Law "and there is the problem." The code does not provide for nationwide policies, he said, but "provides for the bishop of the diocese (to make a decision on each case), not the bishops' conference."

With no TV, how does Pope Francis follow the World Cup?
Gerard O’Connell

But the bishops said the text of their pastoral handout does "not appear as a document of the bishops' conference, given that it also relates to a dimension of the universal church," and that the text is "within the responsibility of individual bishops as an aid to orientation."

The bishops said they were on a quest to achieve Christian unity and believe themselves "obliged to stride forward in this matter courageously."

Cardinal Reinhard Marx of Munich and Freising, president of the German bishops' conference, said there were several reasons why the bishops decided to move forward with their plans to address the matter as a national conference. He cited a May 25 letter from the Congregation for the Doctrine of the Faith, which he said provided "indications and a framework for interpretation."

The bishops said they were on a quest to achieve Christian unity and believe themselves "obliged to stride forward in this matter courageously."

They cited their previous reasons for examining the issue and stated that the bishops are still intent on pursuing questions related to individual cases on a national level.

"We as bishops are concerned here with the question of the Protestant spouse in an interdenominational marriage receiving Communion," they said in their statement.

"The topic is to be explored in greater detail. ... We would like to offer the Holy Father and the Roman Curia our assistance in this matter," the statement said.

It amazes me that so many bishops get all uppity against the Pope on issues of married male priests and receiving communion if your not Catholic but married to a Catholic but then they don't bother to upset the Pope on a matter of extreme injustice and abuse of human dignity, namely ordaining women to priesthood, and demanding women be offered the same sacraments as men in our church as proof they are equal human beings. No, this they don't bother to confront the Pope on. The other questions are important but not matters of justice or human dignity and if we try to ordain married male priests, we will actually create and even greater abuse to women in the form of gender segregation. I am so glad our bishops are all asking what would Jesus do? and do we all have his priorities in our hearts and minds? Not!