The grace-filled encounter between Paul McCartney and James Corden 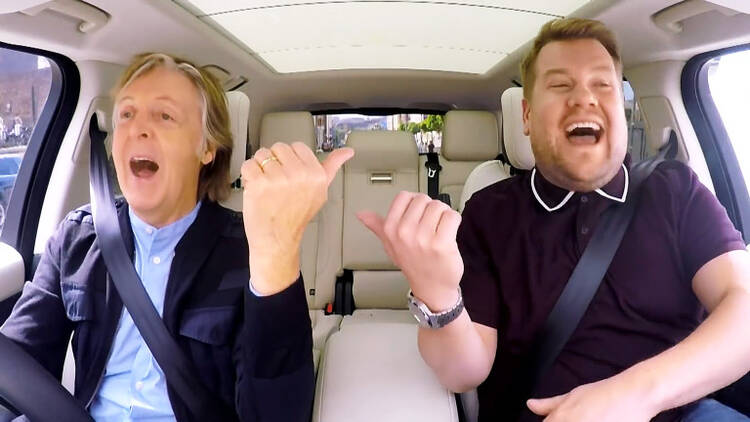 I don’t usually comment on too many “non-religious” or “non-spiritual” things (since I try to stick with what I know), but I thought I would make an exception. A few days ago, I watched Sir Paul McCartney’s “Carpool Karaoke” with the television host James Corden video, as did 16 million (and counting) other people, and found it deeply moving.

Why? Not just because I’ve been a Beatles fan since the 1960s (and marvel that my 13-year-old nephew is, too: he saw Ringo Starr in concert just a few weeks back). But because this extraordinary episode has much to teach us.

First, it teaches us about humility. Of course, Paul McCartney has had 50 years of practice in dealing with fans from all over the world, and, of course, he knew that he was being filmed at the time, but notice how kind, patient and generous he is with everyone he meets in his hometown of Liverpool. (“I’m comin’ in your shop, Luv!” “Tell him I said hi!”) Notice a myriad other small instances of humility: how, for example, he confesses that he thought the Beatles’s songs wouldn't last for more than 10 years. To my mind, it’s hard to “fake” humility. Sir Paul is clearly someone who doesn’t need to prove anything. It’s refreshing to see.

Sir Paul is clearly someone who doesn’t need to prove anything. It’s refreshing to see.

Second, it teaches us about vocation. Clearly, Paul McCartney has a vocation and one that he has lived out well: as a singer and songwriter. That’s a bit of an understatement, isn’t it? But anyone with even a passing knowledge of the Beatles knows something about their hardscrabble beginnings (cf: the Cavern Club), how diligently and tirelessly they worked, and how each tried their best to live out what they felt they were called to do—even at the end, when the band broke up. (Martin Scorsese’s wonderful film on George Harrison, “Living in the Material World,” shows this as well.) It’s a joy to see someone so fully living out his or her vocation and continuing to live it out so completely. (My cousin told me that Paul McCartney astonished her in concert, just a few years ago, in his 70s, with his vitality and range.) Seeing someone live out their vocation so fully is like seeing a flower finally bloom.

Third, it teaches us about human connection. The moment when Sir Paul shares a personal story about the origins of the song “Let It Be” is followed by Corden sharing something equally as personal about what the song meant to him as a child, which is followed up Paul’s simple spiritual encouragement to Corden. To me, that particular moment is a marvelously real example of what Jesuits call “faith sharing.”

They have a lot of fun, these two, and so do those around them.

Fourth, it teaches us about humor. They have a lot of fun, these two, and so do those around them. Sir Paul has a healthy sense of humor about himself and his “mates,” which has always been one of the most appealing things about the Beatles. (See the superb documentary about their longtime fan-club president, “Good Ol Freda,” for more on the enormous fun that “the lads” had in their heyday.) The same kind of larky attitude is evident here. Life can be fun. Why not have a laugh from time to time?

“Be Not Afraid”: The song that eases the biggest transitions in—and out of—life
Colleen Dulle

Finally, it teaches us about grace. There are moments of grace all throughout this lovely video: the expression on the face of the owner of the eponymous barber shop on Penny Lane when Paul surprises her; Paul showing James how he used to play the guitar sitting on the loo; and the look on the face of the middle-aged woman in the pub when Paul starts to sing (you know that she must have been a big fan of the Fab Four back in the day).

So, in the end, this segment is indeed religious, in its original meaning (re-ligio: to tie back). It reveals how one person’s living out of his or her vocation can tie so many people together. And it is deeply spiritual as well, in that it shows us how the spirit can work in such beautiful, touching and unexpected ways. In such grace-filled ways.

Grace is all you need, to paraphrase John Lennon.

Yes! to all you wrote here. And it is important for me to remember that when I feel powerless to change so much evil around me, the interaction between two people can be full of grace. It is a thing we can do each and every day. Thank you for framing this wonderful encounter as you have. This is the kind of religious leadership we need so much right now.

Yeah, celebrity as a spirit filled vocation which is deeply moving and humble. Why does this article not surprise me? Divine right of kings has been replaced by Divine right of the media star. Perhaps the Holy Spirit IS behind polling numbers and upvotes. But who am I to judge? Maybe there is a very special place in Heaven for rock stars. I mean, I like music as much as anyone but this is quite a load of...something!

Someone seems to have rather missed the point. It's not what you are; it's what you *do* with what you are.

Gawd, what a Spirit-filled joy you must be to live around with. Lighten up, Chris.

Fr. Martin is simply following his spiritual father", St. Ignatius', advice to "find God in all things" and this is one interaction millions of people have seen.

My family's lives fell apart on 6/17/18 (yes, Father's Day) and I've barely been able to get out of bed. Thank you for this video and, Fr. Martin, for your beautiful reflections. I needed to be reminded that there are little "graces" to be found everywhere. Please pray for me and my family.

Bless you, Father Martin, for this lovely article and the video. The song "Let It Be" is a gem and needed during these times of terrible trials. I actually have a chaplet that has "Let It Be" on the medallion. A needed message to us.

Thanks for this article. I was so moved by the Corden/McCartney karaoke. Mainly because it
did seem to illustrate humans loving: one another, sharing songs and ideas, just hanging out and having fun. Paul's quiet humility was a blessed relief from the heavy dose of dislike, disgust and hate that fills our media these days. I think I'm going to write to thank James Corden when I send this.

Yes, I normally don't watch Carpool Karaoke, but this one caught my attention. I, too, was struck by Sir Paul's humility and down-to-earthness and the genuine fun and emotion they shared. It was a graced interaction that they shared with Liverpool and the world! Thank you for pointing out God in this interaction, as St. Ignatius recommended we do.