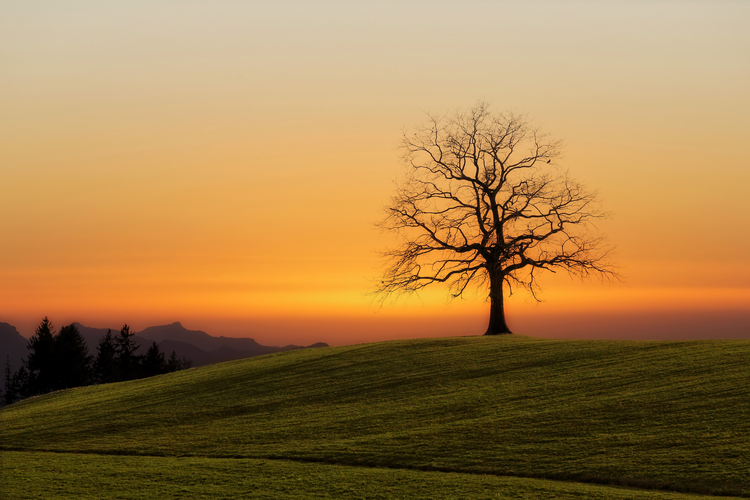 Photo by Johannes Plenio on Unsplash

In The Overstory, Richard Powers combines acute historical research with artistic prowess to create a spell-binding novel, one with the prophetic promise to change our attitudes toward creation. It opens with the story of Nicholas Hoel, a Brooklyn immigrant, who falls in love with his Irish sweetheart on a day spent throwing rocks to loosen chestnuts from trees. When they head west to homestead, he sentimentally ports along several chestnuts, which he plants at their new home in Iowa. Only one tree survives, though it flourishes. Once a month, for the rest of his life, Nicholas takes a photograph of the tree, alone on the Iowa prairie.

Before his death, he begs his son to continue the practice. The grandson does it of his own accord because he grew up flipping rapidly through the stack of pictures, taken each month by his father and grandfather. Doing so gave the impression of watching the tree grow in an observable way, as though a movie, one made over a very long period of time, were shown in fast-forward speed.

More than a hundred frames along, the oldest, shortest, slowest, most ambitious silent movie ever shot in Iowa begins to reveal the tree's goal. A flip through the shots shows the subject stretching and patting about for something in the sky. A mate, perhaps. More light. Chestnut vindication.

Like Trinity Sunday, which precedes it, Corpus Christi could be called a “concept celebration” because on this feast we do not focus on a mystery of the Lord’s life. Instead, we contemplate doctrines drawn from the church’s own daily life. For when do we not celebrate the Eucharist or worship God as Trinity?

This feast contemplates Christ’s continuing presence among us as bread and wine transformed through consecration into his most holy body and blood.

Corpus Christi, however, takes up a tone or theme not highlighted on Holy Thursday, which is centered upon what the Lord Jesus did on the night before he died. Instead, this feast contemplates his continuing presence among us as food, as bread and wine transformed through consecration into his most holy body and blood.

We call our core beliefs about the life of Christ and the church “mysteries.” This is because their full meaning ever eludes us. Yet, as we travel through time, growing and maturing, both as individuals and as a church, more of the mystery is revealed to us. Today, the Solemnity of Corpus Christi is gaining new meaning through our growing environmental awareness.

Christ came among us a human person. But notice that he chose to remain among us, sacramentally and through the power of the Holy Spirit, in another realm of creation—two realms really: plant life and human husbandry. It is as if Christ, who gave himself to us at the Last Supper and called us into an eternal covenant, also casts his claim ever deeper into his own creation.

In the sacrament of his most holy body and blood, Christ claims and consecrates not only us but all of his creation.

What we receive at Communion as the body and blood of Christ entered the liturgy as bread and wine. In our prayers, we speak of them both as being the work of human hands because before we use them in worship they have already been transformed from a state of pure vegetation by our husbandry. Wheat grains must be crushed into flour and then be baked before becoming bread. Grapes must be crushed and fermented to become wine.

Take note of the trajectory: Christ the eternal Son of the Father, who was once pure Spirit, became a man and was seen by human eyes and touched by human hands. Through the power of the Holy Spirit, Christ remains among us when he claims as his own two basic, fundamental products of human husbandry: bread and wine. But we can make bread and wine only because God created the wheat and grapes that nourish us. One could say that sacramentally, which is to say in mystery, Christ descends from pure spirit into humanity, into its husbandry and finally into material creation itself.

How has Christ set you free?
Michael Simone

Knowing that Christ claims the created world as surely as he claims us, how can we continue to treat it as an object at our disposal, one we treat according to the dictates of commerce rather than with reverence as a medium Christ chose and claimed for himself?

The genius of Powers’s novel is to show that we do not truly take in the world of trees or nature itself because both move at speeds so different from our own. We mistakenly suppose that not much of import happens there because trees and other processes of nature live in Christ over spans of time that must be counted in centuries rather than years.

Yet Christ is the alpha and the omega, the beginning and the end of time. “He is before all things, and in him all things hold together” (Col 1:17). It has taken us many centuries to see his sacramental presence in creation. We now know that the created world, which surrounds and sustains us, predates us by so much more time than our minds can comprehend. Corpus Christi reminds us that in the sacrament of his most holy body and blood, Christ claims and consecrates not only us but all of his creation.

It's a seriousness which is the most noteworthy rank of festivity. Furthermore, gets celebrated by the Church in the US, however, write my assignment cheap it is anything but a blessed day of commitment and is hung on the Sunday after Trinity. In Poland,

Happy feast to all.

Outstandingly beautiful, a Revalation from God delivered by the insightful heart and mind of Father Klein and hosted by the orbital outreach of the most brilliant star in creation’s spiritual multiverses, AMERICA Magazine in any of its forms!
Yes, Mother Nature is transubstansative , a “blessed sacrament” leaves, barks, petals, roots and much more, Sacrament-pieces, nourished by a “Tree” (the Tree of the Cross) symbolic of all creation, which as Kilmer says, “Its hungry mouth is pressed against the Earth’s sweet flowing breast!” Mother Nature feeds the Eucharist, Wow! Or as Augustine says, “Gives Milk to our Bread” through Mary, Mother of Jesus nourishing Eucharist, Mary Queen of Heaven and Queen of All Creation! Thanks, Fr. Klein, Thanks AMERICA Magazine, your writing, your togetherness, takes us to the periphery of the Homeland, Heaven, as in prayer, Corpus Christi prayer, not limited to one day!

Interesting. I admit I wasn't familiar with the term.