Why did Christ ascend to heaven? So that moms everywhere could take his place. 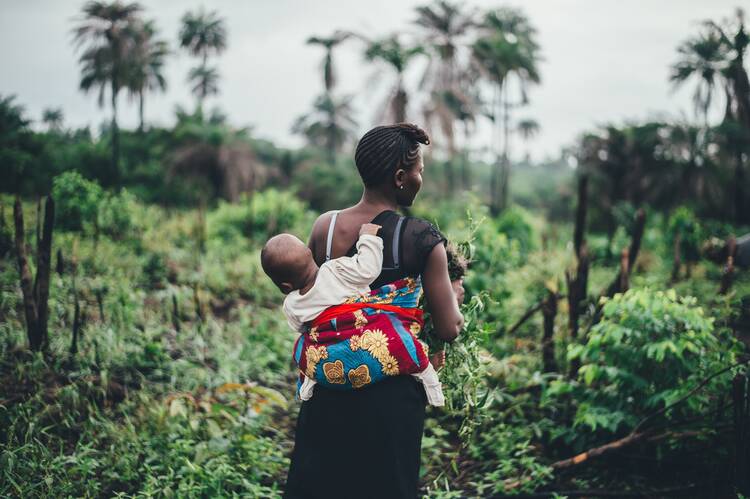 If the question is “Why did Christ leave us?” then the answer is “So that moms could take his place.” Of course, this being a homily, a little elaboration is to be expected, if not exactly encouraged.

So let us look in on Charles Ingalls, who, in 1871, decided to abandon his Kansas homestead and return with his young family to Wisconsin. But, as Caroline Fraser notes in her magnificent Prairie Fires: The American Dreams of Laura Ingalls Wilder:

Swollen by spring rains to the north, rivers were nearly impassable. At one fording, Laura saw her mother hurriedly reach back into the wagon to drop the baby on the mattress where she and Mary lay. She pulled a blanket up over their heads and told them sharply, “Lie still.” Laura could feel the wagon wheels lifting off the river bottom as her father dove into the water, grabbing the swimming horses’ bridles to lead them to the other side.

So there is elaboration for you. Christ didn’t ascend to heaven just to make way for mothers. He also made room for fathers.

If the question is “Why did Christ leave us?” then the answer is “So that moms could take his place.”

Ms. Fraser then adds the sort of historical detail that makes her work such a delightful and informative read:

While the beds of expensive Conestoga wagons, destined for the Oregon Trail, were built to be watertight, the Ingallses were probably using a rough farm wagon, which would have started filling up like a leaky boat. Had the water gotten high enough to top the sides, the whole family would have been lost.

Parenthood, even before the coming of the Christ, has always been about giving, nurturing and protecting new life through the gift of one’s own life. The biological bestowal of life, especially for the father, is the easy part. The real test comes as parents continually sacrifice their own comfort and security for that of their children.

Parenthood has always been about giving, nurturing and protecting new life through the gift of one’s own life.

This was a lesson that Laura had to learn from her own mother when she herself became, in short order, a wife and mother.

On one occasion, the Wilders, suffering from cabin fever during a cold snap, decided to take Rose out to see Laura’s parents. They stowed their bundled baby behind the dashboard, out of the wind, and rode their sleigh to the Ingallses’ house, only to be greeted with dismay by Charles and Caroline, who chided them for venturing abroad with an infant when it was fifteen below zero “You’re crazy!” Laura remembered her father saying. She assured readers that she took care to check on Rose every few minutes to make sure she was warm. But she also admitted: “It seemed there was a good deal to taking care of babies.”

Again, it is Ms. Fraser’s flushing out of the scene that so enriches it. She tells us:

The anecdote reflected the harsh reality of Western settlement. The frontier presented grave hazards to all, but especially to children. The record abounds in tales of what one scholar termed “improvisations,” if not incompetence in child-rearing. Babies were kept in drawers and shoeboxes, parked on the open door of ovens to keep warm, and imperiled by all manner of accidents as their mothers tried to cope with competing responsibilities. Parents found it nearly impossible “to give children even minimal care,” one historian wrote. “Women worried all the time...nearly frantic because it was so difficult.”

Let’s be honest. Parenthood poses two critically competing demands: You must work in order to support your children, and yet you must be present to them, not only as protector but also as loving parent. It is nigh impossible to do both, yet that is the vocation.

For Christians, it is indeed a vocation because what Christ adds to parenthood is the gift of his own self, his mission in the world. To be a good parent has always been its own reward. To be a good Christian parent is to have found a way to imitate the Lord in our own lives, and that is the vocation of every disciple.

Christ does not leave us by ascending to the Father. He establishes the church.

Discipleship as duty also teaches us an essential truth about the Ascension. If Christ had not ascended to his Father, taking our humanity with its cares and cheers into the very bosom of the Godhead, he would still be limited within our world to one spot, one time and one physical body. Even in the modern world, many would want to encounter him, but precious few would be able to do so. An unascended Christ would be a virtually unreachable celebrity.

Christ does not leave us by ascending to the Father. He establishes the church, in all her members, as his way of being potentially present wherever he is needed. That “potential” depends upon us.

And he put all things beneath his feet
and gave him as head over all things to the church,
which is his body,
the fullness of the one who fills all things in every way (Eph 1:22-23).

Every time one of us, in the power of the Holy Spirit, performs a spiritual or corporal work of mercy, Christ is still at work in the world.

There you have the nobility of Christian parenthood, of Christian service. You probably don’t need to be reminded that these always come with Christ’s cross, but a Dakota memory makes the point.

How can you be a sign of Christ for others?
Michael Simone

Imagine yourself on the other side of death with the Lord
Terrance Klein
On the afternoon of August 23, two weeks after the death of her son, Laura was building a fire in the kitchen stove, preparing to make supper. She was burning dried slough hay for fuel; Almanzo had left an armful near the stove, then gone off with Peter to work with the horses. Waiting for the stove to heat, Laura went into the other room, closing the door behind her. Minutes later, when she opened it again, the kitchen was engulfed in flames—the ceiling, the wall, the floor.

She had only enough time to throw one bucket of water on the flames before she realized it was hopeless: she couldn’t pump fast enough. She snatched the deed box from the bedroom and ran outside with Rose. The child was unharmed, but the skin on the top of Laura’s head had been blistered by the heat and her eyes affected by the smoke. “Burying her face on her knees,” Wilder wrote, “she screamed and sobbed, saying over and over, “Oh, what will Manly say to me?”

We don’t know what her husband said, but St. Mark says to us:

But they went forth and preached everywhere,
while the Lord worked with them
and confirmed the word through accompanying signs (16:20).

It’s not a showy sign, but it is, nonetheless, a sure sign. When we encounter the cross in our vocations, in the mission that Christ gave to us as members of the church, and still we persevere, then who can doubt that Christ and his Holy Spirit remain with his church?

I'm not a father. However, as a Special Education teacher now retired and an uncle of now adult nieces and a nephew, I believe that I can relate to the joys and challenges of parenthood. For over 20 years, I worked with children with brain damage and disabled adults. With my students, I hugged them, scolded them, and taught them simple lessons. I also fed them, (,one student had a feeding tube), changed diapers, I also enjoyed with my aides taking the children on outings into the community, and going for walks in the neighborhood. I also played my flute for "my kids" enjoyment, and helped them complete simple arts and crafts projects. Each week we made a meal or dessert, and like a family my children helped my aides and me prepare holiday meals, and put up holiday decorations. But like any father, I patiently and sometimes with frustration dealt with my "kids" tantrums. These included screaming, hitting staff and other students, scratching, and throwing objects.
As an uncle of three nieces and a nephew, I experienced many of the same happy and sad moments. As they grew up, our experiences also grew in scope, though now that they're young adults, my relationship with them is more mature. This doesn't stop me from bestowing hugs and kisses, and gladly receiving them in turn.
I agree that it's for the best that Jesus ascended into heaven, since otherwise He'd be a "virtually unreachable celebrity." Yet we can receive or reach Christ in the Eucharist, as well as reach him in our brothers and sisters. As Pope Francis has pointed out, the Church is like a field hospital. We can imitate Christ by doing our best to heal the wounds of people in need. Like any good mother or father, God loves us despite our imperfections.