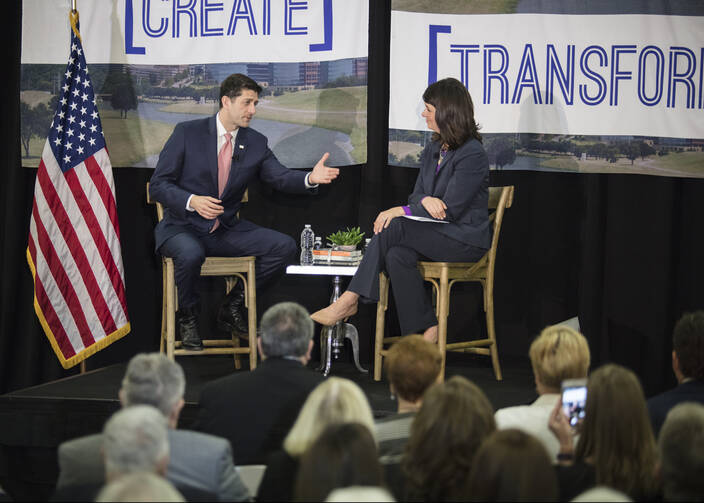 House Speaker Paul Ryan, R-Wis., talks with Heather Reynolds, CEO and president of Catholic Charities Fort Worth, Texas, during a town hall meeting on poverty April 3 at the charity's Fort Worth campus.

A Republican member of Congress wants Speaker of the House Paul Ryan to reinstate Patrick Conroy, S.J., as chaplain of the House of Representatives, writing in a letter that he believes Father Conroy was fired in violation of House norms.

“Not only was I dismayed that Father Conroy was apparently asked to resign without explanation, I was troubled by the manner in which it was done,” reads a May 2 letter from Representative Walter B. Jones of North Carolina.

He said that process by which the chaplain was asked to resign by Mr. Ryan’s office “appears intentionally underhanded” and that he finds it “deeply disappointing.”

Representative Walter B. Jones of North Carolina said the decision “was made behind closed doors based upon the input of only a few.”

Mr. Jones, who is Catholic, says in the letter that the decision to fire Father Conroy, the first Jesuit and only second Catholic priest to hold the post, “was made behind closed doors based upon the input of only a few.” He said that House rules require that members vote on such a resignation, but he noted that the announcement was made and accepted when most members were not on the House floor and that the entire episode “took less than a minute,” leaving little time for comments anyway.

“There was no objection quite simply because few members, if any, were both present on the floor and aware of the action taking place to actually voice their disapproval,” he wrote.

Mr. Jones closed his letter by asking Mr. Ryan, a Catholic who is not seeking reelection, to “revisit” his decision to fire the chaplain, either by reappointing Father Conroy to finish out his term or by bringing the issue to a vote.

Last week, Mr. Jones and three of his Democratic colleagues—Carol Shea-Porter of New Hampshire, Marcy Kaptur of Ohio and Gerry Connolly of Virginia—sent a letter to Mr. Ryan “seeking additional information” about his decision to fire the chaplain.

“Not revealing such details could also risk resurrecting prior questions of religious bias,” the letter reads. It also says that without more information, Father Conroy’s reputation could suffer, with “unfair and utterly unfounded inferences to be made about his character and the evenhandedness of the House on dealing in matters of faith.”

Mr. Jones asked Mr. Ryan, a Catholic who is not seeking reelection, to “revisit” his decision to fire the chaplain.

Reasons for Father Conroy’s dismissal have not been made clear, but on Friday Mr. Ryan dismissed claims that his decision was based on politics.

“This is not about politics or prayers. It was about pastoral services. And a number of our members felt like the pastoral services were not being adequately served or offered,” Mr. Ryan said last week at a conservative gathering hosted by The Weekly Standard.

Others have suggested that the dismissal came after some Republican members of Congress took issue with a prayer Father Conroy delivered on the House floor when lawmakers were debating tax legislation.

“As legislation on taxes continues to be debated this week and next, may all members be mindful that the institutions and structures of our great nation guarantee the opportunities that have allowed some to achieve great success, while others continue to struggle,” Father Conroy said on Nov. 6, 2017. “May their efforts these days guarantee that there are not winners and losers under new tax laws, but benefits balanced and shared by all Americans.”

Father Conroy told The New York Times last week that after he offered the prayer on taxes, Mr. Ryan told him, “Padre, you just got to stay out of politics.” He told the newspaper that this was the first time the speaker’s office had raised questions about the content of his prayers.

Congressional Democrats introduced a resolution on April 27 to investigate the firing, but it was voted down along party lines, with just three Republicans voting against tabling, and effectively killing, the resolution. Mr. Jones did not vote on the measure.

Speaking on the House floor on Friday, Representative Joe Crowley, a Democrat from New York who introduced the proposal to investigate, said that the firing was “concerning to a number of members on both sides of the aisle” and that it “compromised the dignity of the House of Representatives by politicizing the office of House chaplain.”

Father Conroy is expected to step down May 24.

Not only appears underhanded but what he actually says in the firing of this Chaplain is you pray the way the GOP ( or me) wants ( expects ) you to pray. Ryan's actions can be summed up as those of a dictator.

The prayer took place about 5 months ago. So why is it the focus of the explanation?

Maybe it took all this time for people to raise their objections but maybe it was something else.

I understand there are two ways for the chaplain to leave the post. First, he/she can resign. Second, there can be a new vote. Ryan himself does not have the power to remove the chaplain. So my guess he asked for the resignation at the request of others. I doubt he personally cared but if the chaplain is not supported by a large number of the congress he/she should resign.

My guess we do not know the real story.

This is the 4th story about the firing. Why this many?

Why four stories? A couple of simple reasons:
• you are not the editor,
• Jesuits are the editors and the subject is a Jesuit, not a stretch to realize that,
• the House Speaker is a Catholic, nothing more journalistic than a “man biting the dog” story, and
• the reaction from some non-Catholic Representatives was outright anti-Catholic.
Makes sense to me.

Makes sense to me

Thank you for your comments but you failed to give a coherent reason for now 5 stories on the chaplain. No one is arguing with the editor's prerogative to publish certain stories. It is their wisdom or insight or charity which is at question.

In the scheme of things this is really a minor incident so why five stories. I think we all know the reason. If you don't, I can spell it out for you but it is nothing in what you gave.

And the real reason should be beneath a Catholic publication but here it isn't. With the old Jesuits it would have been.

The writer complains that when the vote was taken, there weren't enough House members on the floor. So a resolution was proposed to investigate (presumably with "enough" House members, or the writer would have said otherwise), and it did not pass. Case closed.