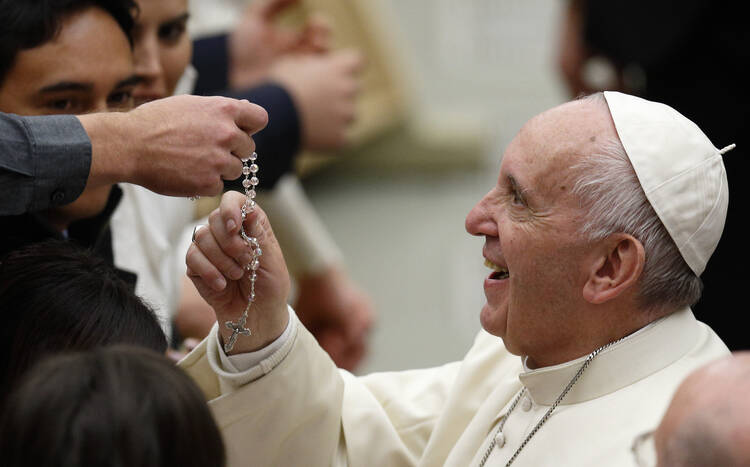 Pope Francis touches a rosary during his general audience in Paul VI hall at the Vatican Nov. 30. (CNS photo/Paul Haring)

Pope Francis has called on Catholics worldwide to join him in praying the rosary during the month of May for peace in the world. He said he was praying especially for peace in Syria, Nigeria and the Koreas.

He issued his call on Sunday, April 29, after reciting the Regina Coeli prayer with some 30,000 pilgrims from many countries, including Italy, India, Pakistan and Portugal. He told them that on the afternoon of May 1 he will go to the Shrine of the Madonna del Divino Amore, on the outskirts of Rome, where he will “recite the Rosary, praying especially for peace in Syria and in the entire world.” He invited the faithful “to join him spiritually [on that occasion] and to prolong for the month of May the prayer of the rosary for peace.”

The pope said he is praying especially for peace in Syria, Nigeria and the Koreas.

The pope has expressed his concern about the situation in Syria, a country of 18 million people, where the seven-year war has left an estimated 500,000 dead, while more than five million Syrians have fled the country and over six million are internally displaced. He is “deeply disturbed,” as he said recently, at the failure of the political leaders of the international community to end that war and bring peace to this martyred country.

But there are other conflict situations, too, for which Pope Francis wants Catholics to join with him in prayer during the month of May.

He mentioned North and South Korea and told the pilgrims in St. Peter’s Square that he was “accompanying with prayer the positive outcome of the inter-Korean summit last Friday and the courageous commitment taken by the leaders of the two sides to realize a path of sincere dialog for a Korean Peninsula that is free of nuclear arms.”

“I pray to the Lord that the hope of a future of peace and more fraternal friendship will not be disappointed.”

Then, referring to the hopes for peace between the peoples of North and South Korea, whose countries have been divided since 1945, Francis said, “I pray to the Lord that the hope of a future of peace and more fraternal friendship will not be disappointed, and that the collaboration may continue [by] bringing the fruits of good for the beloved Korean people and for the whole world.”

Last Wednesday, April 25, he publicly assured the Korean people of his “personal prayer” and “the closeness of the whole church” for the success of the summit at Panmunjom between the leaders of the two Koreas, Moon Jae-in and Kim Jong Un, and said that he hoped the summit would be “a propitious occasion to start a transparent dialogue and [open] a concrete path of reconciliation and re-found fraternity between the two sides, so as to guarantee peace in the Korean Peninsula and in the whole world.” He then urged the political leaders, to have “the courage” to become peacemakers.

In his remarks today, he praised “the courageous commitment” of the leaders of the two Koreas and assured them of his continued prayer for peace in the country. At the end of his visit to South Korea in August 2014, he presided over a Mass in the cathedral of Seoul for peace and reconciliation between the two peoples of this divided country.

In his remarks today, the pope praised “the courageous commitment” of the leaders of the two Koreas.

Today, the pope also called for peace in Nigeria. “In the past week, the Christian community of Nigeria was again hit by the killing of a group of faithful, among them two priests,” Francis said. “We entrust these our brothers and sisters to the God of Mercy so that he may help these suffering communities to find again harmony and peace.”

On April 24, some 30 Fulani herdsmen attacked the faithful during morning Mass at St. Ignatius Catholic Church in the village of Mbalom, killing at least 19 faithful, including two priests. “The service had barely started, and worshippers were still coming for the Mass, after which a burial ceremony would take place, when sounds of rapid gunshots rent the air,” according to the Nigerian Vanguard newspaper. It reported that “after attacking the church, the invaders descended on the community and razed over 60 houses, farmland, food barns, after carting away what the people had in their barns.”

The village is located in Benue state, in the tense “Middle Belt” between the nation’s predominantly Muslim north and predominantly Christian south. The Vanguard said that “in areas like Benue, most of the settled farmers living there are Christian” while “the Fulani herdsmen, mostly Muslim, are semi-nomadic and fighting for land and resources.” According to The Guardian, the clashes with the Fulani have become “more deadly than the Boko Haram jihadist insurgency that has ravaged Nigeria’s northeast and is becoming a key issue in the upcoming 2019 presidential elections.”

Pope Francis is deeply concerned at the ongoing attacks on the Christian communities in this nation of 193 million people, of whom at least 20 million are Catholics. He learned much more about their plight earlier this week when he met the Nigerian bishops during their ‘ad limina’ visit to Rome.

My husband and I recently started praying the Rosary before bedtime.
Better than anything else to focus on what is truly important. Together with unplugging from checking online activity, the rosary at bedtime has instilled much comfort and wonderful sleeping. We are all for it