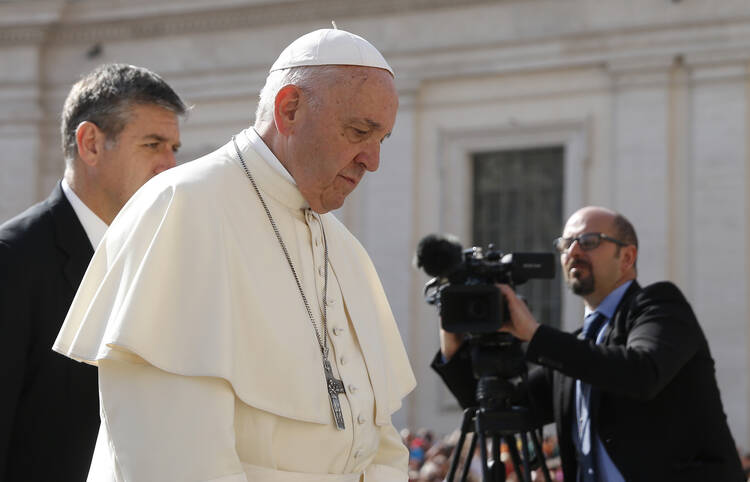 Pope Francis walks past a video journalist during his general audience in St. Peter's Square at the Vatican April 25. (CNS photo/Paul Haring)

Pope Francis has begun his face-to-face, “personal encounters” with the three Chilean abuse victims that accepted his invitation to come and talk with him, the Vatican announced this Friday evening, April 27.

The three victims—Juan Carlos Cruz, James Hamilton and Jose Andrés Murillo—are staying in Santa Marta, the Vatican guest house where the pope lives. He will first meet each of them individually, one or more times, and when they have said all they want to say, Francis will meet them as a group.

The pope will first meet each of the victims individually, one or more times, and then as a group.

In a statement issued this evening, the director of the Vatican Press Office Greg Burke said Pope Francis’ “priority” is “to listen to the victims, ask pardon and respect the confidentiality of these conversations,” and so at his expressed wish “no official communique of the content of these [personal encounters] is envisaged.” Francis wants to emphasize that this is serious business, not a public relations exercise.

The statement said that “in this climate of trust and of reparation for the suffering [of the victims], Pope Francis wishes to let those invited speak for all the time that is necessary, in such a way that there are no fixed times nor pre-established contents [for the conversations].”

The three Chileans will eat and sleep under the same roof as the pope in the coming days.

The three Chileans entered Santa Marta late yesterday and will eat and sleep under the same roof as the pope in the coming days. They are his guests, and he is making himself fully available to them, in a spirit of humility. He bears the cost of their trip and their stay, which could last several days.

He wishes not only to make amends and ask pardon for offending them and for the abuse they suffered, but he also desires to hear all they have to say about their terrible ordeals and to listen to the proposals they have for dealing with the dramatic situation of the church in Chile and for avoiding a repetition of such abuses in the future.

All three were victims of the infamous Chilean priest predator, Father Fernando Karadima, who was found guilty by the Vatican in 2011 of the abuse of minors in the 1970s and 1980s and sentenced to a life of prayer and penance.

The Vatican statement was issued in Spanish, probably because many Chilean journalists have come to Rome for this event. There is also enormous international interest in this extraordinary encounter.

This is a meeting of inimitable historical importance. It is a tsunami in Catholicism. A paradigm change. This was this pope's greatest failing and he has been so good otherwise. What these priests did and the subsequent is so sick. We have seen this before but this cover-up was more galling. Coming from a pope who should have known better. This is a historic week in the history of the church.Where the servant of the people will show in deed more than words that it is service not power that is the hallmark of the servants of God.