Bishop McElroy: Catholics must fight polarization in politics and the church 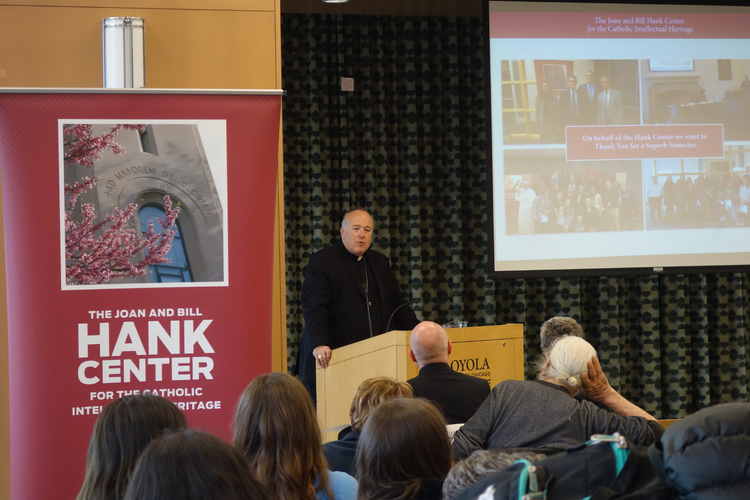 Catholics have a special duty to resist polarization, both in politics and in the church.

That was the message from Bishop Robert McElroy, the head of the Diocese of San Diego, who was in Chicago delivering a lecture named for the late Cardinal Joseph Bernardin, a former Chicago archbishop who sought to unite Catholic camps that sometimes disagree on how to live out the church’s call to protect life at every stage.

Bishop McElroy, who holds a doctorate in political science from Stanford University, said that Catholics must strive to adopt a new “Catholic political imagination” that embraces “the virtues of solidarity, compassion, integrity, hope and peace-building.”

Using Pope Francis’ 2015 address to the U.S. Congress as inspiration, Bishop McElroy said Catholics, especially church leaders, must “reassess” how they “carry out the mission of evangelizing the political culture of the United States” and lamented that the church’s views are often used not to promote the common good, but to score political points.

Bishop McElroy said that Catholics must embrace “the virtues of solidarity, compassion, integrity, hope and peace-building.”

“Catholic teaching has been hijacked by those who break down the breadth of our social doctrine by reducing it to the warped partisan categories of our age and then selecting those teachings for acceptance which promote their partisan worldview,” the bishop said.

Referencing a new apostolic exhortation from the pope, in which he calls believers to holiness and urges them to embrace the full range of Catholic social teaching, including opposition to abortion as well as concern for the poor and marginalized, Bishop McElroy lamented that “in the partisan reality of our day, these two complementary claims of the Gospel are placed in political opposition.”

“Even worse,” he added, “skewed distillations of Catholic moral teaching are deployed by both sides to explain why one set of these issues automatically enjoys a higher claim upon the consciences of believers.”

Bishop McElroy’s views have been interpreted as being part of the “seamless garment” approach to Catholic social justice teaching, a notion advanced by Cardinal Bernardin in the 1980s. For example, Bishop McElroy has said Catholics should approach reducing poverty with the same gusto as fighting abortion, writing in America in 2013, “The cry of the unborn and the cry of the poor must be at the core of Catholic political conversation in the coming years because these realities dwarf other threats to human life and dignity that confront us today.”

During his talk at Loyola, the bishop said Catholics are called to fight polarization in the political arena by shifting posture away from ideological battles and toward the Gospel.

What he dubbed a “Catholic political imagination” could guide this political evangelization, which would include “heartfelt compassion for all those who are suffering in society,” including those who suffer because of racism, poverty, gun violence, threats of deportation and sexual harassment.

Polls show that political polarization has increased dramatically over the past couple of decades.

“These are wounds in our society which tear at our social fabric and constitute immense human suffering that must be addressed,” he said. “ The central challenge is whether we can meet our woundedness with care and action which are not filtered through a partisan lens.”

Polls show that political polarization has increased dramatically over the past couple of decades.

According to a 2017 report from the Pew Research Center, fewer than 20 percent of Democrats and Republicans had a “very unfavorable” view of the opposing party. In 2017, that number had increased to about 45 percent.

He lamented that the church in the United States is also infected by polarization, saying that “many of those most committed to the work of transforming our nation through the realization of Catholic social teaching are also deeply factionalized.”

What does it mean to be a neighbor in a polarized America?
Hosffman Ospino

“A Catholic political virtue ethic for this moment in our nation’s history must recognize that the need for dialogue, encounter and unity is more important than any single policy issue we face today, because such a stance of encounter and dialogue is itself the foundation for any genuine pursuit of the common good,” he said.

Responding to a question from a Loyola undergraduate student, Bishop McElroy said engaging young Catholics will be especially important for the church in this area, calling an upcoming synod of bishops devoted to young adults “enormously important in the life of the church.”

“Unless we can find ways of engaging with the younger generation, it’s going to be a greatly crippled church moving forward,” he said.

What is causing the polarization?

Three articles in one day!!

Does the bishop or America, the magazine, want discussion or acquiescence? I have a feeling it is the latter.

Cosgrove, why do you feel you are being forced to acquiesce?

I didn't use the word "force." I am saying the bishop seems to want acquiescence and is not interested in the truth or what could be wrong with what he is saying.

Do you see any admission on the bishop's part that he could be on the wrong side politically. The bishop has no special insight in political maters. He uses the word "must" and not the word "dialogue." He doesn't seem interested in a discussion which is why I used the term "acquiescence."

We Catholics should never embrace “the virtues of solidarity, compassion, integrity, hope and peace-building” if heretical teachings are proposed.

The article at times comes across rather blunt. At that point, there is no doubt the Bishop's grasp of the topic is second to none.

Is dismissing people as gnostics or Pelagians polarizing? Was Fr. Spadaro's article on evangelicals and American Catholics polarizing? We wouldn't have all this polarization if the rest of you would just keep quiet and agree with me.

Perhaps a reduction in polarization starts with giving the other person credit for acting in good faith. Sadly, we don't see much of that coming from the Vatican these days.

Fighting against partisan polarization in the US should start with the American bishops, many of whom have stoked the fires of partisanship through their selective teaching of Catholic doctrine with regard to voting and politics.

It is all too obvious that the polarization to which Bishop McElroy refers exists in varying degrees among the Bishops of the USA as well, for that matter the world. I would also posit that political conservatism feeds religious conservatism and vice versa. The nexus between religion and libertarians or liberals isn't quite the same because many liberal viewpoints are antithetical to “orthodoxy.” For those of parochial and/or provincial viewpoints, that a liberal might also be "Catholic" is a hard pill to swallow. Pope Francis, however, is a deft exponent of both orthodoxy and a liberal sentiment that doesn’t shout “anathema” to those who disagree or who do not believe. He is grounded in the Christ who spoke to married women, healed the lame and sick on the Sabbath, and dined with tax collectors in the face of orthodox condemnation by fellow religionists. So, to Bishop McElroy's points, it’s hard enough to get Catholic Bishops to learn by Francis’ example, never mind the people in the pews!