This year, see the Easter candle through the eyes of an infant 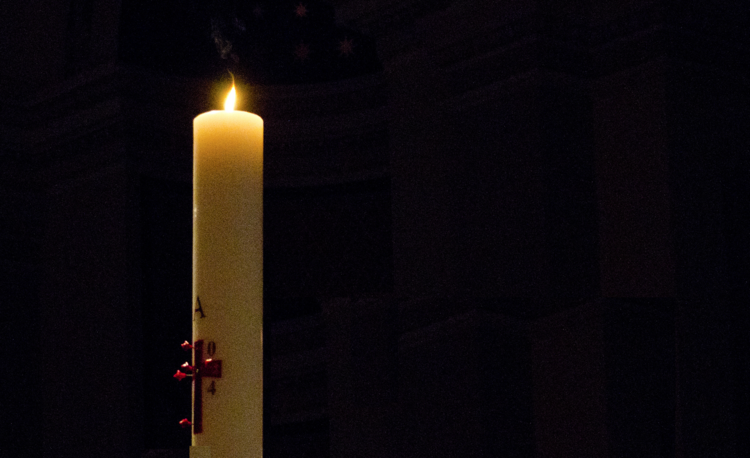 Veronica, my now 12-year-old daughter, was 5 months old when we went to my in-laws’ farm for her first Easter. We went to the Vigil at Immaculate Conception Church in Corning, Calif. I was not sure how Veronica was going to handle the sudden darkness that opens the liturgy. When the lights went out she was totally quiet. Uncharacteristically quiet.

Suddenly the Paschal candle pierced the darkness; then Veronica did the same. She shrieked with delight, the way she did when she saw two young dogs chasing each other a couple of weeks prior. Again and again, she called out. She put her feet on my belly and lunged toward the light, arms outstretched like a superhero about to take flight. Her legs stiffened and relaxed repeatedly while she made raspberry sounds. Her fists were opening and closing, my abdomen had become a trampoline, and her echoing squeals were unceasing. In sum, she was freaking out. Not knowing the tolerance allowed infants in this parish, I thought it would be best to observe the rest of this from the vestibule.

Suddenly the Paschal candle pierced the darkness; then Veronica did the same.

Once there, her delight gave way to heaving sobs. I do not know if my words made sense to her or if my voice confused her enough that she forgot why she was crying, but when I said, “If you can be quiet, we’ll go back inside,” she responded with total silence. Back in the pew, however, she again saw that wondrous flame. The same wild, shrieking scene ensued and my husband, Joseph, and I took turns in the vestibule until the lights came back on. He joked, “Wait until she can talk and can tell you exactly what she was feeling that night!”

Fast forward 11 years. We had recently moved to the Southern California area and we would be celebrating the Easter Vigil with our new parish, St. Thomas More in Oceanside.

We arrive as the last glimmer of daylight fades. Everyone is given a slender, white candle and we walk over to the bonfire around which the other parishioners had gathered. About an hour prior, Veronica had been grumbling about going to church for three days in a row and her little brother, David, echoed her sentiments. Now, however, her face is different. She is watching the fire with a marked intensity. She is leaning in, craning and tiptoeing to get a good look at it. When the firelight falls on her face, she seems transfixed, as though the rest of the world has melted away.

Newness allows us to see the Easter fire as it is meant to be seen: as a mystery of beauty, love, joy and hope that illuminates the darkness.

From her other world back to mine, she whips around, “Mom, can I get closer to the fire?” I nod. She invites her brother, and they snake their way through the crowd. Next thing I know—and being 6’1” I have a pretty good vantage point—they are right beside our priest and deacon, her face betraying her wonder again. Prayers begin, and the Paschal candle is aflame.

The flame passes from candle to candle, and I watch as Veronica holds hers close, feeling the warm glow from her own little star. She looks all around at the other flames—some steady, others flickering. She is pondering something big, I can tell. As we move into the parish building, Veronica rejoins us. She leans over to me, pulling my arm urgently downward so I am closer to her height, “Mom! The fire, it just kept spreading! It didn’t matter how many flames it made, it never got smaller or dimmer. No matter how much fire we took away from it, it still kept giving.” She pauses and then smiles big, giddy with what she is about to tell me, “Mom, it was infinity! It was just like love, Mom! It was just like God!” I give her a nodding smile with my eyes stinging, feeling that crescendoing instant of God’s undeniable presence.

It took me a few months to make the connection between these two events. Admittedly, from a child development perspective, Veronica’s infant experience was rooted in excitement over the fire, without the theological insight she would bring it 11 years later. But, I would be wrong to say they were entirely unrelated. Even as an infant, she was fascinated by and attracted to the fire through an immense joy and awe. That glorious wonder was the same in each case, only with the benefit of translation some years later.

And it is that glorious wonder, that captivating beauty, that summit of all desires that can illuminate us as we stand in the glow of the Paschal flame this Easter. To experience this mystery most fully, we must approach this liturgical moment with a profound newness in ourselves. Newness comes easily for infants, but a Lent practiced with intention—abandoning distracting habits while refocusing on God—provides newness for the rest of us. Newness allows us to see the Easter fire as it is meant to be seen: as an overwhelming mystery of beauty, love, joy and hope that illuminates the darkness. May we emerge anew in the first light of Easter, bathed in life and a living witness of Christ’s enduring promise. 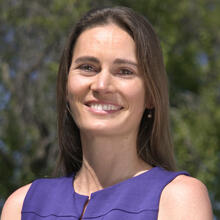 Maureen K. Day is an assistant professor of pastoral ministry at the Franciscan School of Theology in Oceanside, Calif.

I don't know if this is what most infants would say, but at least it was written by a woman and not some celibate man who can just barely distinguish between a baby and a dachsund in a hat.