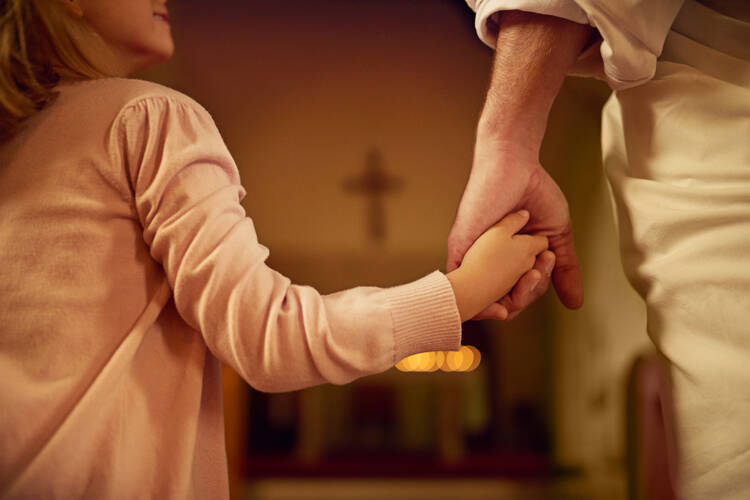 Let’s just say I have been to Mass many, many times. Still, I pretty often hear something astonishing, something that makes the top of my head lift off and let in something new. The word or phrase or idea itself is not usually new; but it penetrates in a fresh way. Just what I needed to hear!

Despite some bitter experience with kids at Mass, I cannot help glancing down the pew to see if any of them heard what I heard.

Inevitably, they did not. And they are pretty good kids. But one is fiddling with her split ends, one is studying his buttons and one is staring into space with such a slack jaw, I mentally review the signs of stroke. They are clearly just waiting for Mass to be over so they can get on with their weekend.

What a missed opportunity. It is enough to make a mother despair.

Or almost enough. When I got home from Mass last Sunday, I set up some coffee and waited for it to slowly brew. I cruised through social media and saw a quote that made me laugh: “Everybody's tired. Nobody feels really well. Everybody feels like they’re no good at least some of the time. Now please get up and go to work anyway.”

“Ha,” I thought, “That sounds just like my mother!” And then (and I know this sounds like a pat, made-up story, but it is true) I read the rest of the comment: “I consider these words nearly every day and it helps me get up out of bed and do all the things. Thanks, Simcha.”

There I was, being quoted by someone, saying things I needed to hear myself, this very day, long after I had forgotten I said such a thing.

I obviously did hear them, though, because there I was, telling it to other people. There I was, being quoted by someone, saying things I needed to hear myself, this very day, long after I had forgotten I said such a thing. Oh, life. Oh, memory. Oh, mothers.

My mother does not say anything that makes sense anymore. She was once brilliant (quantum-physics-as-a-hobby brilliant) and startlingly witty, with no time for nonsense. But now she has Alzheimer’s, and all she has is time and nonsense. Now she says things like, “I can use that for a sunapat. Sunapat with a T. I don’t know, I’m falling out of a tree.” Her nonsense often has a desperate, frustrated air, as if she knows people don’t understand her and she needs to try even harder to get her message across.

In Christ, there is everything we need to hear.

I wish I could convey to my mother that her work is done and she can rest and stop worrying. She got out of bed, she did all the things, she said all the things that needed to be said, while we stood there, staring at our buttons, letting our jaws hang slack, waiting for her to finish talking so we could get on with our lives.

I have gotten on with my life, leaving my mother behind. And becoming ever and ever more desperate to hear the words I need to hear, the things I need to know. God knows it will happen to me, too. Two of my children left for college this year, and if all goes well, they will turn to me less and less. Did I tell them all the things they needed to know? Were they listening?

One thing: I brought them to Mass to hear the things they needed to hear. Eighteen years times 52 weeks, plus Holy Days of Obligation, minus sick days...

In Christ, nothing is lost. I know this. In Christ, nothing is forgotten. I know this. Everybody feels like they’re no good at least some of the time. Everybody feels, at some point, like no one is listening. But in Christ, everything good, true and beautiful is worth expressing, even if no one seems to hear. In Christ, there is everything we need to hear. It is our job to say the truth over and over again; and it is our job to ask Christ, over and over again, to hear what we need to hear.

Say it again, Lord. I am trying to listen.