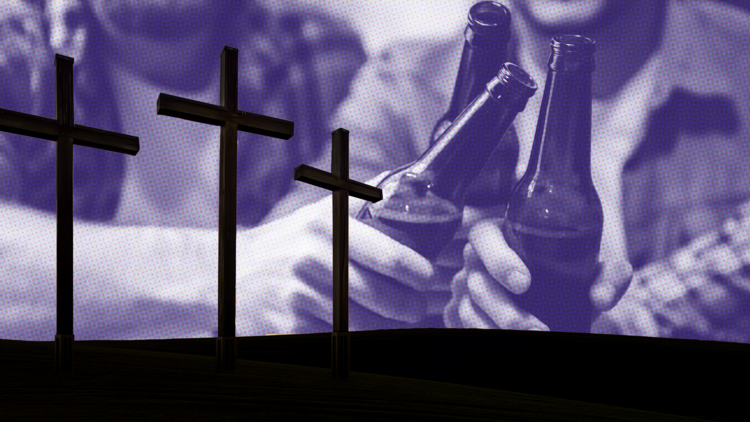 Good Friday may be a somber day, but it does not necessarily have to be a perfectly sober one. This year, after the Good Friday liturgy, a group of Brooklyn men will gather to share a few German beers. And they are doing so well within church tradition and laws, claims their parish priest.

“According to the church’s own rules,” explained Anthony D. Andreassi, C.O., “there is no prohibition from drinking alcohol on Good Friday.” On the topic of fasting and abstinence, the United States Conference of Catholic Bishops writes, “A person is permitted to eat one full meal, as well as two smaller meals that together are not equal to a full meal”—remaining conspicuously silent on the consumption of liquid beverages. While many Catholics may choose to abstain from alcohol on Fridays and holy days, there is no formal injunction against drinking beer, wine or spirits.

Good Friday may be a somber day, but it does not necessarily have to be a perfectly sober one.

After the Good Friday service at the Oratory of St. Boniface in Brooklyn, N.Y., the parish’s young men group will be sharing beer and pretzels in the parish hall along with Father Andreassi, the parish’s vicar of faith formation. (Zac Davis, an assistant editor at America , is a member of the group.)

The beer chosen by the group is a nod to an older Lenten tradition from the Bavarian monks behind Paulaner’s Salvator beer. In the 1600s, brothers of the Order of St. Francis of Paola (also known as Paulaner monks) strictly fasted from all solid foods during Lent. When they moved from Southern Italy to the Cloister Neudeck ob der Au in Bavaria, they began to brew a type of bock beer that was high in carbohydrates and nutrients. This beer sustained the monks through their Lenten observance and eventually became popular around the world.

“If we were those monks, we’d look forward to Lent all year long,” joked Father Andreassi. Last year, one of the men offered to brew a special bock beer for their Good Friday meeting. This year, they will be drinking store-bought bock beer but will have homemade German pretzels.

This beer and pretzel social is not just an excuse to drink with friends.

“We’re limiting ourselves to two bottles of beer each and one pretzel,” assured Father Andreassi. “It is still Good Friday.”

This beer and pretzel social is not just an excuse to drink with friends. It is a culmination of the group’s Lenten journey together. For each Friday of Lent, the men’s group agreed to observe a sun-up-to-sun-down fast from all solid foods. They pool together the money they saved by fasting to donate to a few local organization. This year, the money will be going to Catholic Migration Services in the Diocese of Brooklyn and Brooklyn Jesuit Preparatory School.

The Triduum in your 20s: What Holy Week taught me about change
Jennifer Sawyer

The men’s group also takes on a particular role in the church’s Good Friday service. Six men are required to remove the sanctuary cross from the wall and carry it to the congregation for the Veneration of the Cross.

“Many in the parish are elderly or infirmed, so when they approach the cross, the cross has to be brought down to them,” explained Father Andreassi. The men of his group are given a chance to meditate on this simple act of helping people come to the cross.

After the Good Friday service, the members of men’s group invite their spouses, partners and friends to meet each other over beer and pretzels. Though the social has only been around for a year, the practice speaks to a larger sensibility within Catholic culture. Recalling a discussion with a fellow priest, Father Andreassi said, “It’s no surprise that Jesus wanted to gather people around a meal.” The beer and pretzels have a sacramental quality to them when they are shared among friends after reflecting for 40 days on the sacrifice of Christ.

AMERICA Magazine, the online version too, enshrines Lent as a lot more than just forty days, think three hundred sixty-five days and beyond Think in terms of when Christ comes again! Read its submissions reflectively to experience intellectual, world/church history, politics, social, religious and Catholicity stimulants, beneficial to all levels of existence. Read it with closed mind and heart, with critical one-sided limp, and its life-giving substance is syphoned off the “soup” providing at best a tasteless broth! That reader looses! And oh yes, have a couple beers, bock the best and some pretzels on Good Friday! See the AMERICA article on which I have chosen to place my post.

There are of course other substantial sources too. See the following. On the Sunday before Lent, also on Ash Wednesday, our Pastor, Fr. Martino distributed to all parishioners a booklet called, "The Little Black Book" offering a short reading for every day of Lent from the Passion of St. Mark by the late Bishop of Saginaw Michigan, Ken Untener. Maybe you know of this booklet. All the short readings have been wonderful and spiritually stimulating, the ones for the Friday and Saturday of the 5th week of Lent startling!

In those readings the Bishop pointed out that when Jesus cried out his question to the Father. "Eloi, Eloi, lama sabatani?" it was not just in a "loud voice" as usually translated, but in a "scream" the literal translation of the Greek word. This struck me hard! It made me realize that my sins made Jesus scream in pain, the Second Person of the Blessed Trinity screaming! That's terribly sad, shattering! It happened again according to the Greek translation when Jesus gave a loud cry and breathed his last." Jesus died "screaming" because of sin, mine included! If this doesn't lead sinners to repentance, what will?

As the hymn “Where You There When They Crucified My Lord” says, that Jesus screamed “makes me tremble” and it is so humbling at what Jesus went through for me, for all of us. As I said before, this revelation struck me hard, shattering to pride, grateful to Jesus, increasing my love and thankfulness towards Him for what he went through for us! At 86 I must admit “The Little Black Book” along with AMERICA’S offerings, gave me my best Lent ever! Thanks AMERICA! Thanks Father Martino!

Great story. It might lead credence to all the visions these early Monks might have had. They were drunk. Or better yet delightfully spirited.

Perhaps I am just too old, but on Good Friday go Church and spend
time comtemplating what Jesus suffered for us and then go and
do something charitable and go home.

Save the Beer and Pretzels for another Friday.

Angelo Jesus Canta is a Joseph A. O'Hare, S.J., Postgraduate Fellow at America.