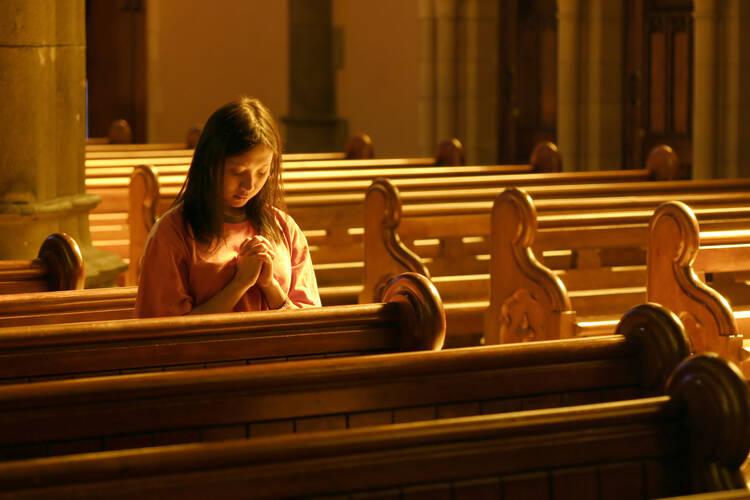 Younger Americans are leaving the Catholic Church and turning away from religious institutions altogether. That is the simplistic way of reporting the results of several major surveys, but some data also suggests that this trend is not irreversible.

The study “Going, Going, Gone,” released earlier this year by St. Mary’s Press and the Center for Applied Research in the Apostolate at Georgetown University, focused on young adults who were raised Catholic but have left the church. A major subgroup are the “drifters,” who do not report poor experiences or ideological dissent from the church but simply find no value in faith.

As the authors write, “A contributing factor in drifting away from faith is the lack of companions on the spiritual journey” and an absence of “peer or adult support.” This lack of support shows up in some of the report’s findings (click to enlarge the infographic at left): Most former Catholics had attended Mass no more than a few times a year, and only about one-third had received the sacrament of confirmation (compared with more than two-thirds of young adults who still identify as Catholic). A large majority stopped identifying as Catholic between the ages of 10 and 17, which means they “drifted away” before entering college or the workplace.

Other recent polls have shown skepticism toward religion and the moral necessity of believing in God among millennials and members of Generation Z (born after 1999). The Barna Group released survey results in January with the sensationalist headline “Atheism Doubles Among Generation Z,” but only 13 percent of Generation Z proponents actually chose the atheism label, with 66 percent identifying with Catholicism or another religion.

We do not know yet whether youthful alienation from religion is permanent. Even Generation Z members may return to the pews when they start forming families, but this could be a more difficult return if they do not perceive other young adults joining them.

The church could be more careful about teaching religion. I think most people see religion as a matter of obeying rules when it is more a matter of seeking the truth and growing up.

The problem is belief.

If there is a God, then what were His intentions in creating this world and us. If we are just a happenstance, then again there is no meaning in religion.

If there is no life after death, then religion is again meaningless as there is no purpose in life other then optimizing one's personal serotonin or dopamine flow. Doing good and helping others is just evaluated through positive emotional feelings not by what is right or what God has told us to do.

It all comes down to belief and belief cannot be based solely or mainly on emotions. It must be based on reason. The shame is Catholicism is extremely rational but one would never get that from this site or the Church in general.

The modern day Catholic Church is more of a social institution as opposed to a way for salvation. Because of that it is just competing with other do good organizations for making one feel good.

Our intellect strives for clarity but our nature leans toward ambiguity. Unless we realize this, we will seldom approach the truth.

Aside: Mr Sullivan makes his return. He was mainly here to promote liberal politics. See where he goes from now on as liberal politics have been abandoned from this site unless they think there is a smoking gun to get Republicans or Trump.

"It all comes down to belief and belief cannot be based solely or mainly on emotions. It must be based on reason. The shame is Catholicism is extremely rational but one would never get that from this site or the Church in general. "

What a shameful misreading of Christ's example and the entire history of Catholicism. What a disturbing sociopath you must be to suggest that the error in Catholicism and Christ's example is that emotions are a large part of the story. Humans are emotional creatures. As is Christ. "Jesus wept," not "Jesus rationalized." Shame on you. You sound like you want to embrace what the Chinese communist government would design Catholicism to be.

Young Catholics I know are turned off by homophobia, the Church's insistence on fighting against CIVIL marriage between same sex couples who love each other and want to make lifelong commitments, and the Church's continual of covering up of child rapists in the Church. Cardinal Dolan of NY actively fighting against a law that would give people abused as children more time to prosecute their accusers is despicable. I raised my children going to mass every Sunday and in Catholic school. They learned about loving their neighbor and about treating people as equals, yet the Church continues to discriminate against women and fire gay people from positions where they are sharing their talents as teachers, musicians, counselors, etc. I am not surprised that while they believe in God and love Him dearly, they have had it with the institutional Church.

Exactly. In fact, my three adult children often confront me, saying that if Catholicism was not cultural for me (I'm Italian), then I would order them to stay away from it, as it is a misogynist and homophobic institution. The sexual crimes and the despicable cover-ups are so horrific, there are no words. There are some truly evil and craven men in the hierarchy. All of this has nothing to do with Jesus, of course. But it is incresingly impossible to put all of these things aside and stick with the church. What about the immigrants (DACA)? The refugees? Why is the church actively seeking "religious freedom" laws that discriminate against LGBTQ people? Why is the church firing civilly married gay employees? Why is the church denying life-saving OB-GYN treatments to women in Catholic hospitals? These questions need to be addressed. Is the church capable of being there for the Catholics of conscience who believe in civil rights? LGBTQ rights? Immigrant rights? WOMEN'S rights (for God's sake, it's time)? How could the majority of Catholic WOMEN vote for Trump (the p%$%! grabber)? Fr. Jim Martin is doing a great job. Where are the other church leaders for today?