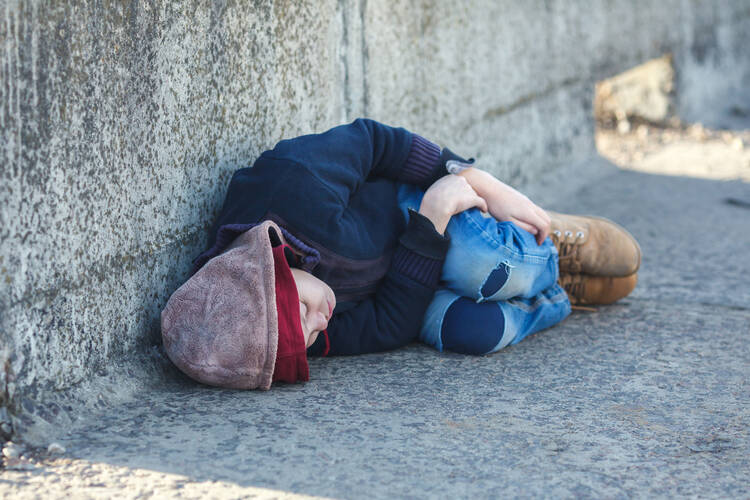 The challenge of finding families for homeless youth and for those in group shelters is creating the latest flashpoint over competing civil rights claims. (iStock/bodnarchuk)

Earlier this month, city officials in Philadelphia launched a campaign to find 300 families to take in foster children, an effort to secure housing for those currently living in group foster care arrangements. But less than a week later, the agency that administers the city’s foster care program announced it was suspending partnerships with two faith-based agencies, including Catholic Social Services, because they refuse to place children in homes headed by same-sex couples.

The city is investigating the policies of its foster care partners to make sure they follow a city ordinance that bans discrimination based on sexual orientation. Some religiously-affiliated providers say this threatens their religious liberty, while L.G.B.T. activists say they should be treated like any other Americans, creating the latest flashpoint over how public money should be spent in light of competing civil rights claims. Complicating matters is that many homeless children identify as L.G.B.T. themselves, and some advocates say they would benefit from supportive foster parents.

Many homeless children identify as L.G.B.T. themselves, and some advocates say they would benefit from supportive foster parents.

The city’s decision came after The Philadelphia Inquirer reported that the faith-based agencies do not place children in homes headed by same-sex couples, which an official at the A.C.L.U. of Philadelphia called “a tragedy for the kids of Philadelphia.”

The Archdiocese of Philadelphia, for its part, said that Catholic Social Services is “proud to provide safe and nurturing foster environments to young people in need.”

“Given the longstanding partnership between CSS and the city, we hope to continue our productive relationship with the City of Philadelphia to serve those among us in need,” Ken Gavin wrote in an email to America.

According to the Inquirer, Catholic Social Services and Bethany Christian Services received about $3 million from the city in 2017, representing about 3.5 percent of the Philadelphia Department of Human Services’ total payments to providers of foster care. Catholic Social Services placed 266 children in foster homes last year, while Bethany Christian Services found homes for 170. Both organizations have held contracts with the city since the mid-1990s.

Heather Keafer, a spokeswoman for Philadelphia’s Department of Human Services, told the Associated Press that the 233 children placed with families through the organizations will remain in their homes, but new placements will stop.

Nick Seip, a communications officer for the True Colors Fund, which targets homelessness in the L.G.B.T. population, told America that for a L.G.B.T. youth experiencing homelessness, “support around their sexual orientation and gender identity is crucial.” He said foster parents who identify as L.G.B.T. could provide needed support to kids who come out.

“It would be a shared experience that would allow the child to say who they are rather than fear rejection,” he said.

“The Catholic Church does not endorse same-sex unions based upon deeply held religious beliefs and principles.”

The precise number of homeless youth in the United States is unknown, though a 2013 report prepared by Congressional Research Service says the number exceeds 1 million. According to a 2012 report from The Williams Institute, about 40 percent of clients at agencies serving homeless youth identify as L.G.B.T. (These clients include young adults over 18, who would not be eligible for foster care.) And a report released in November by Chapin Hall at the University of Chicago found that youth who identify as L.G.B.T. have a 120 percent greater chance of experiencing homelessness than their non-L.G.B.T. peers.

Figures like that have prompted some agencies to reach out to L.G.B.T. adults who may be interested in foster care. In Philadelphia this week, city officials are hosting an information session aimed at recruiting L.G.B.T. people to serve as foster parents.

Both Catholic Social Services and Bethany Christian Services say they work with L.G.B.T. youth, but they say their religious convictions do not allow them to place those children into homes headed by L.G.B.T. adults.

“CSS is, at its core, an institution founded on faith-based principles,” Mr. Gavin wrote. “The Catholic Church does not endorse same-sex unions based upon deeply held religious beliefs and principles. As such, CSS would not be able to consider foster care placement within the context of a same-sex union.”

He said the agency “does not make inquiry as to the sexual identity or orientation of the young people it serves. It provides foster care services to those who need such assistance regardless of their background.”

But a lawyer with Lambda Legal told the Inquirer that the Catholic Social Services policy could harm L.G.B.T. kids.

In Vermont, the latest clash between public money and the Catholic Church
Michael J. O’Loughlin

“How do you pretend you can simultaneously say we serve all youth and do a good job serving all youth while at the same time you’re saying same-sex couples are not real parents, are not good parents?” asked Currey Cook.

Challenges over issues of sexuality to Catholic entities that place children in homes with the assistance of government funds date back to at least the mid-2000s.

In 2005, The Boston Globe reported that Catholic Charities agencies in Massachusetts had been placing children with same-sex couples, prompting an investigation by church authorities. The Catholic Charities board voted unanimously to continue the adoptions, but the bishops of Massachusetts disagreed and sought an exemption from state law. Seven board members resigned in protest of the bishops’ actions. Mitt Romney, who was then the governor of Massachusetts, tried unsuccessfully to get the state legislature to carve out an exemption, and church officials ultimately decided to shut down their adoption program.

Last year, U.S. Representative Mike Kelly, a Republican from Pennsylvania, and Senator Mike Enzi, a Republican from Wyoming, introduced legislation that would withhold some federal funds from states that “discriminate or take an adverse action” against social service agencies that opt not “to provide, facilitate, or refer for a child welfare service that conflicts with, or under circumstances that conflict with, the provider’s sincerely held religious beliefs or moral convictions.”

A 2017 statement from the U.S. Conference of Catholic Bishops expressed support for the measure.

“Without religious liberty properly understood, all Americans suffer, including the neediest children seeking adoptive and foster families, as well as birth parents who wish to turn to faith-based providers in order to place their children with adoptive parents,” it says.

But groups like the A.C.L.U. are challenging those laws.

In Texas, a married lesbian couple is suing a local Catholic Charities agency over its refusal to place refugee children with same-sex couples. A similar case is also playing out in Michigan, where the local chapter of the American Civil Liberties Union is suing the state over allowing some local Catholic Charities agencies to refuse to place children with same-sex couples.

In Philadelphia, the fight for independence was premised upon the opposition to the government's taking of taxpayer money and using it to benefit some but not others (particularly those in America). The Bill of Rights of the US Constitution was drafted to prevent the new US government from interfering with the God-given rights of the People, putting religious freedom in the very first Amendment.

I don't see why the government is in the business of allocating taxpayer dollars for the homeless. But if it is in that business, it should not be doing it as a matter of providing benefits to would-be parents, but as a matter of providing a home to a child, period. The government should not be playing favorites. When it does, that's when it's time to rebel against it, as our forefathers did.

Given the paltry number of devout, holy, Catholic marriages, if a gay Catholic couple is availble and willing to receive such a child, do it. Imagine choosing to place a foster child in the home of Donald Trump Jr or Chelsea Clinton versus a lovely, commited gay Catholic couple who share their love for God, each other and an abandonded child. Our parish has half a dozen gay couples who participate at Mass and parish ministries like clockwork, as predictable as a Swiss watch. They sit in the same pews week after week, are always ushering, lectoring, singing in choir and their love overflows.
God is love.

I wouldn't smear Chelsea Clinton by comparing her to Donald Trump.