In Vermont, the latest clash between public money and the Catholic Church 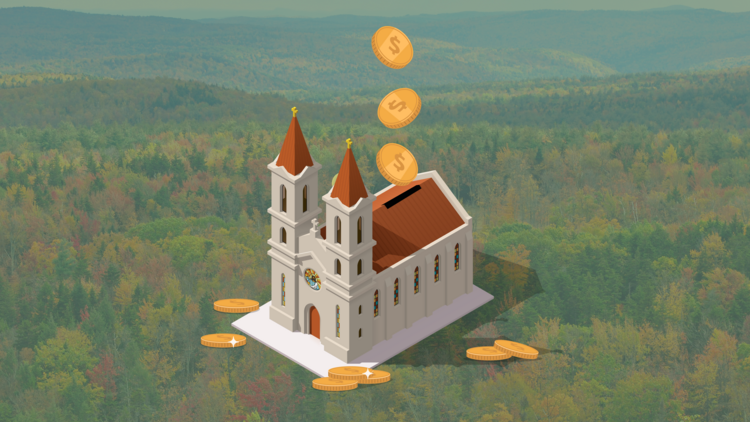 The question of whether students at Catholic high schools should be cut off from programs that benefit other students is being debated in Vermont and across the nation. (Images: iStock, Wikimedia Commons; Composite: America)

Brian Senecal just wanted his child to have the same opportunities as other Vermont high schoolers. When he and his daughter Savana heard about a program that provides state-funded vouchers for juniors and seniors to take classes at Vermont colleges and universities, they were intrigued. Savana was interested in pursuing a college-level math course before leaving high school.

But during an information session, Mr. Senecal learned that the program was not an option because his daughter is a student at Rice Memorial High School in Burlington, one of 13 Catholic schools serving 2,300 students in Vermont.

“I can’t believe that Vermont would do that. That’s discriminatory,” Mr. Senecal, in a recent interview with America, recalled thinking after the meeting.

The battle in Vermont is just the latest in a series of confrontations about public money mixing with Catholic institutions.

In 2013, the Vermont Legislature created the dual enrollment program to improve educational opportunities in the state and to try to keep more young adults in Vermont—an effort to inject some youth into Vermont’s rapidly graying demographic—by getting them acquainted with some of the state’s colleges and universities before they graduate from high school.

“I can’t believe that Vermont would do that. That’s discriminatory.”

This is not the first time the program’s restrictions on private school students have come under question.

The Burlington Free Press published an editorial in 2014 calling on the Legislature “to open the dual enrollment program to all Vermont high school juniors and seniors, regardless of whether they attend a private or public school.” The following year, a Vermont education official defended the exclusion, saying parents who choose to send their children to private schools “can’t pick and choose” which public school benefits they want to utilize.

But Mr. Senecal and other supporters of efforts to broaden the dual enrollment program note that parents who send their children to private school still pay their share of taxes that support public schools—without putting a strain on the public system.

Now, three state senators, including two Democrats, have sponsored a piece of legislation that would allow private schools, including Rice Memorial, to participate in the program.

But not everyone is on board.

State Sen. Brian Campion, a Democrat, said that he is concerned that amending the law could create constitutional problems. Vermont’s state constitution includes a “compelled support clause.” The state Supreme Court ruled in 1999 that this clause prohibits direct support for religious schools because there are no restrictions to ensure that state funds would not support religious worship.

“It’s impossible to track the money” that a private or religious school could save by participating in the voucher program, Mr. Campion said, according to Vermont Public Radio. “Is it going to support the vicar, or is it going to support a messaging around a woman's right to choose? That's my concern.”

But supporters of expanding the program note that the money never goes to a high school. Instead, it is sent directly from the state to the participating college or university.

While the vast majority of Vermont students are eligible for the vouchers, which pay the full cost of up to two college classes, students who attend religious and other private schools are not.

Among the institutions receiving state money as part of the dual enrollment program are two Catholic institutions, Saint Michael’s College and the College of Saint Joseph.

As for church and state issues, an expert on the Vermont Constitution testified before the State Senate in 2014, arguing that including students at religious high schools would pass constitutional muster. The state’s Catholic bishop dismisses those concerns as well.

“There’s no good argument against it in terms of the separation of church and state,” Bishop Christopher Coyne told America.

Rick Garnett, a law professor at the University of Notre Dame and the director of the university’s Program on Church, State & Society, agrees.

“The ‘separation of church and state’ is an important aspect of the American tradition, but this distinction does not require and should not even permit blatant discrimination against students simply because they and their families choose qualified religious schools for their education,” he wrote in an email to America, adding that he believes the current law would be found unconstitutional if challenged in court.

“This is not a debate about whether public funds in Vermont should be used to pay for religious instruction or to support religious schools,” he said. “It is, instead, about whether a generally available and entirely ‘secular’ benefit should be withheld simply as a penalty for exercising the constitutional right to choose a faith-based school.”

Earlier this year in Chicago, a network of Catholic hospitals sought a tax break, valued at about $5.6 million, on its new headquarters in exchange for its pledge to spend more than $15 million to build health care facilities in underserved areas.

While the tax break was supported by Mayor Rahm Emanuel, the N.A.A.C.P. and more than a dozen aldermen from areas where the new facilities would be built, Planned Parenthood, the American Civil Liberties Union of Illinois and at least a couple members of the city council opposed the measure because of the church’s prohibition on abortion and sterilization.

“For me, the issue comes down to: Should the city of Chicago be providing a public subsidy—city tax dollars—to fund a hospital system that does not provide those basic reproductive health services? And for me, as pro-choice, also Catholic, I can’t support this request,” Alderman Brendan Reilly said in January, according to The Chicago Tribune.

Planned Parenthood opposed the tax break for a hospital headquarters because of the church’s prohibition on abortion and sterilization.

More recently, the L.G.B.T. group Lambda Legal filed a lawsuit against the U.S. Conference of Catholic Bishops and a number of federal agencies on behalf of a married lesbian couple who say they were told by a Texas Catholic Charities agency that they could not be foster parents to refugees because they did not “mirror the holy family.”

The lawsuit says that the agency stopped communicating with the women, Fatma Marouf and Bryn Esplin, after it discovered they were married. It argues that the U.S.C.C.B., one of the nation’s largest settlers of refugees, and its affiliates “discriminate against same-sex spouses, but also effectively erase the non-Catholic identities and beliefs of many of the unaccompanied refugee children for which they are responsible.”

“This conduct potentially increases those children’s alienation and vulnerability, while denying them access to loving homes that could serve them best—all at federal taxpayers’ expense,” it argues.

The L.G.B.T. group Lambda Legal filed a lawsuit against the U.S. Conference of Catholic Bishops on behalf of a married lesbian couple seeking to become foster parents to a refugee.

A statement from Bishop Michael Olson and the Texas Catholic Conference said there are other ways for parents like those suing the bishops to become foster parents.

“It would be tragic if Catholic Charities were not able to provide this help, in accordance with the Gospel values and family, assistance that is so essential to these children who are vulnerable to being mistreated as meaningless in society,” the bishop said.

A representative from the U.S.C.C.B. did not return America’s request for comment on the lawsuit.

Cathleen Kaveny, who holds dual appointments in the schools of law and theology at Boston College, said that the hostilities between secular and faith groups are the result of a prolonged culture war—and that the losers are those most in need.

“This is a predictable and very regrettable consequence of the culture wars and the ways they’ve been waged on both sides,” Ms. Kaveny told America.

“Nobody’s asking that, and you reap what you sow,” she said. “People of good will on both sides, who want to try to find a way to live together respectfully—and that’s most people—have lost. When any kind of social services is threatened, then the vulnerable who are served lose, and more generally, vulnerable populations lose.”

Julie Hanlon Rubio, a theologian at Saint Louis University, said she believes such tensions will continue.

“We've seen conservative Christians trying to avoid having their money go in morally problematic directions,” she wrote in an email to America. “But here it's the reverse: people don't want government money to support (however indirectly) Catholic organizations. The issues are similar (abortion, contraception, same-sex marriage), even in the case which is ostensibly about education.

“It seems to me that both kinds of cases will be more common given shifts in public opinion on contested issues,” she said.

Back in Vermont, State Sen. Debbie Ingram, a Democrat, is sponsoring a bill that would revise the law and allow private and religious schools to participate in the dual enrollment program; she said the Senate is expected to vote on the measure next week. And Mr. Senecal said that even though it is too late for his daughter to participate in the program, he is forging ahead with a group of other parents to make sure the law is changed.

“This won’t affect my daughter, but it will be awesome for others,” he said. “I think it’s a fantastic program.”

Personally, I don't like to see my tax dollars used to subsidize patriarchal institutions. As long as women are excluded from the ministerial priesthood, we should not complain too much about discrimination.

Luiz, give it a rest.
After all what are you going to do when you get to Heaven and God the Father, God the Son and God the Holy Spirit
are waiting for you ?

This is the very reason that we have Freedom of Religion guaranteed in our Constitution. The Constitution framers were acutely aware of the dynamics of political social behavior and realized that in order to guarantee the freedom of one person they had to guarantee the freedom of all.
Discrimination and bigotry comes in all kinds of disguises, which are mere excuses for one culture to control another culture, with a clear conscience. A religion must be able to practice what it believes and the American Constitution guarantees that premise.

If you are a citizen of Vermont how can you be denied the opportunity to
participate in a public program ? Is this not as silly as saying that if a
student went to the University of Vermont as an Undergraduate on a
State Scholarship they cannot use those college credits and degree
if they apply to Graduate School in a Catholic University ?