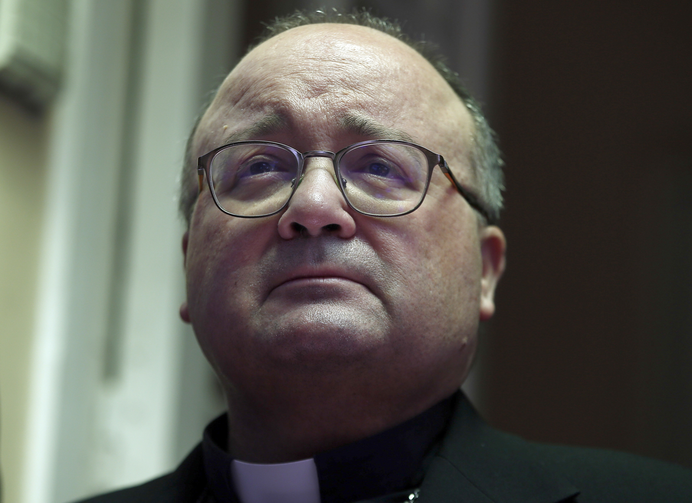 Archbishop Charles Scicluna looks on during a press conference prior to a meeting with people who claim to have been victims of sexual abuse by members of the Church, in Santiago, Chile, Tuesday, Feb. 20, 2018. Scicluna, arrived in Chile on Monday, sent by the Pope Francis to gather testimonies accusing the Archbishop of Osorno of covering up sexual abuses committed by priest Fernando Karadima. (AP Photo/ Luis Hidalgo)

Maltese archbishop Charles Scicluna was stable and conscious after the surgery and his hospital recovery will take between 48 and 72 hours, the curia for Scicluna's archdiocese in Malta said in a brief statement issued by a Chilean hospital.

Scicluna entered the hospital Tuesday after starting his interviews with victims and others opposed to the appointment of a bishop accused of covering up for the country's most notorious pedophile priest.

The spokesman for the Chilean Catholic bishop's conference, Jaime Coiro, said Scicluna had been suffering abdominal pain since last week. Coiro said the pope has asked that interviews with witnesses continue Wednesday through Friday as planned. For now, they are to be handled by Jordi Bertomeu, a Spanish priest who has been serving as Scicluna's translator and notary.

"We hope that (Scicluna) recovers sooner than expected, so that at least he can rejoin the meetings Friday," Coiro said.

Scicluna came to Chile to investigate complaints about Bishop Juan Barros. The case has dented the reputation of Pope Francis, who sparked outrage in Chile during a recent visit by strongly defending Barros and saying accusations against him were slander.

Barros has been accused by victims of witnessing and ignoring the abuse of young parishioners by the Rev. Fernando Karadima, who was removed from ministry and sentenced to a lifetime of "penance and prayer" in 2010.

Barros has denied knowing of the abuse.

Barros has been a bishop since 1995, but his 2015 appointment to the city of Osorno by Francis caused outrage after the Karadima scandal had eroded the Catholic Church's credibility in Chile. He has faced protests in Osorno by priests and lay Catholics who question how someone who says he never saw anything suspicious at the parish could be trusted to protect Osorno's children today.

Jose Andres Murillo, one of the three victims who have spoken publicly of abuse of Karadima and have accused Barros of a cover-up, came Wednesday to meet with the investigators. He said that Bertomeu and Scicluna are showing another side of the Catholic church and that he hopes the information that they have gathered goes straight to the pope.

"It's very gratifying, and in a way, also refreshing, that people from the church finally invite you to talk and hear what we've lived through," Murillo said after meeting Bertomeu.

"They're taking things seriously when it comes to the abuse, the cover-up and the dynamics that have marked the Karadima case."

Associated Press writers Nicole Winfield in the Vatican and Eva Vergara in Santiago, Chile, contributed to this report.