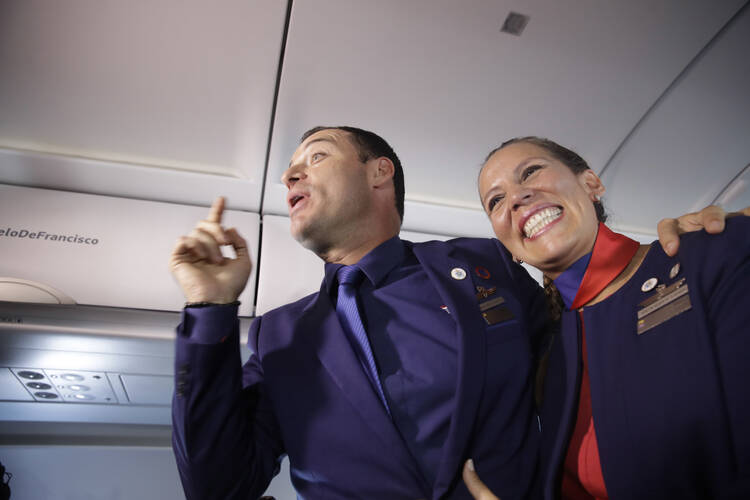 Love was literally in the air as Pope Francis performed an impromptu wedding ceremony at 36,000 feet aboard his flight from Santiago to Iquique in Chile. Francis became the first pope to give an airborne marriage blessing to a Chilean couple—a LATAM airlines hostess and steward, Paula Podest Ruiz, 39, and Carlos Ciuffardi Elorriaga, 41. The couple had already been civilly married and were living together for eight years but had not been married in the church. 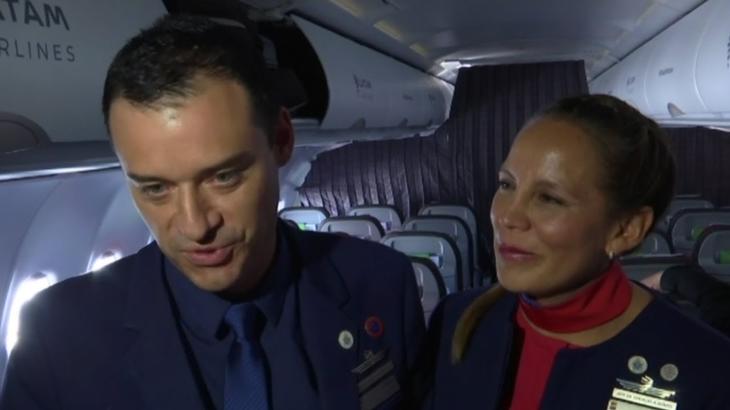 It all happened when the crew met the pope, as is customary on such flights. Paula and Carlos have two children—Rafella and Isabella—and asked him to bless their ring. They were surprised when he proposed instead to formalize their union with a religious wedding.

The press corps traveling with the pope were stunned, and an air of excitement ran through the plane as reporters questioned the happy couple and heard their story.

In the land of the Mapuche, Pope Francis calls on indigenous peoples to say ‘no’ to violence
Gerard O’Connell

Mr. Ciuffardi told reporters: “The pope asked us if we were married in the church, and we told him ‘No, because our church [in Santiago] was destroyed by an earthquake on Feb. 27, 2010.’ And then he asked, ‘Do you want me to marry you?’”

A visibly moved Carlos added, “The idea was his.” He said that the not only did Pope Francis marry them with witnesses and a written act, but he also was very humorous during the ceremony. “Take care: Don’t put on the rings too tight because it can be torture, not too loose as they might fall off,” the pope joked with the happy couple.

They said: “The pope asked us if we wished to make our marriage public, and we told him we had no problem. He said, ‘That’s very good because it will encourage other couples who are married civilly to get married in the church.’”

For the little ceremony at this high altitude, Pope Francis called for two witnesses—a Chilean priest traveling on the plane, Father Felipe Herrera, and the head of the LATAM airline, Ignacio Cuento, who also served as best man. The pope then proceeded to ask the usual questions of the marriage ceremony and signed the certificate, which the Vatican daily is publishing.

Mr. Ciuffardi told journalists in the aisle of the Airbus 321 that Francis told him the blessing was "historic"—no pope had ever before married a couple aboard a plane.

Vatican spokesman, Greg Burke, told the press: “Pope Francis married them; everything is valid, everything is official. There are witnesses, there is a document.”

With AP and CNS reporting. This story has been updated.