In the land of the Mapuche, Pope Francis calls on indigenous peoples to say ‘no’ to violence 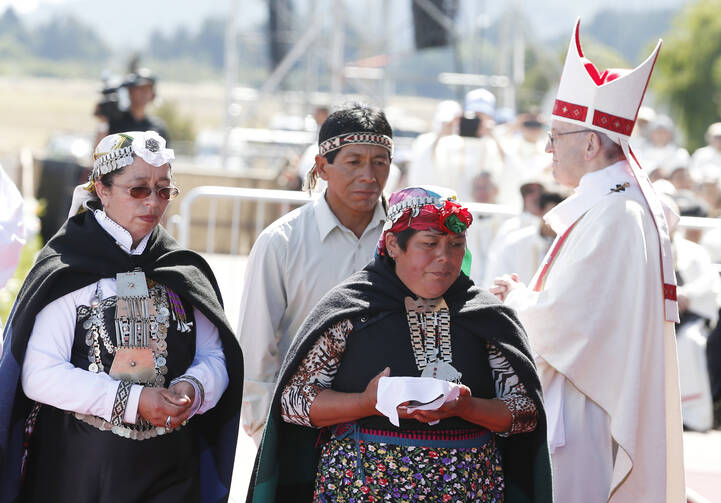 From the heart of the ancestral lands of the Mapuche, the original inhabitants of the Araucanía region in southern Chile, Pope Francis today warned against “two forms of destructive violence” and appealed to this people, who have suffered “great injustices,” to be united as they demand their rights and to totally reject violence “which can make a just cause turn into a lie.”

He issued his stirring call during a Mass with 400,000 indigenous people at an airbase near Temuco, at which members of the Mapuche welcomed him in traditional style with song and dance, and during the Mass said prayers in their native language.

He identified the first form of “destructive violence” as the one that results from “coming up with ‘elegant’ agreements that will never be put into practice. Nice words, detailed plans—necessary as these are—but, when unimplemented, end up ‘erasing with the elbow, what was written by the hand.’” This is one kind of violence, “because it frustrates hope,” he stated. It was a message to the government and state authorities.

He warned too against a second kind of violence, one that has been seen in recent days in this region with the destruction of six churches, a school and three helicopters of the forest guard.

Pope Francis appealed to this people, who have suffered “great injustices,” to totally reject violence “which can make a just cause turn into a lie.”

Speaking of this second episode of violence, which has been attributed to a radical organization of young, educated people within the Mapuche people known as the Coordinadora Arauco Malleco, he told them, “we have to insist that a culture of mutual esteem may not be based on acts of violence and destruction that end up taking human lives.”

He insisted that “you cannot assert yourself by destroying others, because this only leads to more violence and division. Violence begets violence, destruction increases fragmentation and...separation. Violence eventually makes a most just cause into a lie.”

Pope Francis told them that those two “approaches” lead to violence and “are like the lava of a volcano that wipes out and burns everything in its path, leaving in its wake only barrenness and desolation.” He urged them instead to “seek the path of active non-violence, ‘as a style of politics for peace,’” and “seek, and never tire of seeking, dialogue for the sake of unity.”

Ever since his election as pope, Francis has advocated for the rights of the indigenous peoples throughout Latin America and expressed his esteem for them. He insisted on coming here to do likewise for the Mapuche, and for the same reason he will go to Puerto Maldonado in Peru, the gateway to Amazonia, on Jan. 19. He came here to express his closeness to the Mapuche, who today count for about 9 percent of the Chilean population, or 1.5 million people, 24 percent of whom live in Araucanía, which is today the poorest region of Chile, with the highest unemployment rate in the country.

This morning he flew south from a military airbase in Santiago to the city of Temuco that has a population of 290,000. Temuco was founded by the Chilean military in 1881 as a garrison town in the heart of the Araucanía region.

Pope Francis was given a rapturous welcome from the 400,000 colorfully dressed Mapuche people at the Maquehue airbase, Temuco, when he arrived at 10 a.m., and drove among them in his popemobile under very tight security. They jumped, cheered and sang, and waved colorful scarves and sought his blessing.

Thousands had also come from Argentina, including 500 members of popular movements and two of its leaders whom the pope knows well: Sergio Sánchez, the leader of the “cartoneros” whom he invited to the inauguration ceremony of his pontificate, and Juan Grabois who is a coordinator of these movements.

He thanked God for allowing him to visit “this beautiful part of our continent, the Araucanía,” which he said is “blessed by the Creator with immense and fertile green fields, with forests full of impressive araucarias—the fifth ‘praise’ offered by Gabriela Mistral to this Chilean land—and with its majestic snow-capped volcanoes, its lakes and rivers full of life.” We saw a snow-capped volcano as we flew in.

“Arauco has a sorrow that cannot be silenced, the injustices of centuries that everyone sees taking place.”

Francis recalled how “many generations of men and women have loved this land with fervent gratitude.” He then extended his greeting “in a special way” to “the members of the Mapuche people, as well as the other indigenous peoples who dwell in these southern lands: the Rapanui (from Easter Island), the Aymara, the Quechua and the Atacameños, and many others.” They applauded warmly at being recognized by him.

Tourists will be moved by the beauty of this region, Francis said, “but if we put our ear to the ground, we will hear it sing: ‘Arauco has a sorrow that cannot be silenced, the injustices of centuries that everyone sees taking place.’”

Over the centuries, the Mapuche had defended their lands against the Inca Empire and the Spanish conquistadores. But after Chile gained its independence and became a state, exactly 200 years ago, and sought to gain control over the whole country, they suffered the loss of their lands first to German and Italian colonizers, and then those lands were sold to timber companies making it very difficult today for the government to restore them to their original owners.

Francis told them that during the Mass he and they thank God “for this land and its people,” but also remember “the sorrow and pain.” At this point he stopped to recalled that the Maquehue airbase where they were celebrating Mass “was the site of grave violations of human rights.” This was a reference to the fact that under the military rule of General Pinochet this was a torture center where many died.

Pope Francis recalled that the Maquehue airbase where they were celebrating Mass “was the site of grave violations of human rights.”

“We offer this Mass for all those who suffered and died, and for those who daily bear the burden of those many injustices,” he said. He then stopped and asked for a moment of silence for all this suffering. A deep silence descended on the vast crowd, which Francis ended by linking all this suffering to “the sacrifice of Jesus on the cross [that] bears all the sin and pain of our peoples, in order to redeem it.”

He then went on to recall the Gospel story that they had just heard, which told that Jesus at “a crucial moment in his own life” stopped “to plea for unity.” Jesus did so, the pope said, because “he knows that one of the greatest threats for his disciples and for all mankind will be division and confrontation, the oppression of some by others.” Francis linked the appeal of Jesus to unity to the situation of the Mapuche people, among whom divisions have appeared, and even groups advocating violence to get their rights.

He warned them against two temptations that may arise to “poison the roots” of their unity and search for justice. The first is that “of confusing unity with uniformity.” He reminded them that the unity Jesus is advocating “is not meant to neutralize or silence differences.” His unity “is not an idol or the result of forced integration; it is not a harmony bought at the price of leaving some people on the fringes.” The unity he wants is one that “can never be a stifling uniformity imposed by the powerful, or a segregation that does not value the goodness of others.”

Pope Francis is heading to Chile and Peru. Here’s what to look for.
Gerard O’Connell

Francis told them that the unity that is needed today in this land is one in which “we listen to one another, but even more importantly, that we esteem one another.” This, he said, “sets us on the path of solidarity as a means of weaving unity, a means of building history. The solidarity that makes us say: We need one another, and our differences so that this land can remain beautiful! It is the only weapon we have against the ‘deforestation’ of hope. That is why we pray: Lord, make us artisans of unity.”

Then in a message addressed not only to the Mapuche but also to the Chilean authorities, Francis said, “if unity is to be built on esteem and solidarity, then we cannot accept any means of attaining it.”

Pope Francis concluded by urging the Mapuche people to ask the Lord “to make us artisans of your unity,” and reminded them that that “all of us, to a certain extent, are people of the earth” and “all of us are called to ‘the good life’ (Küme Mongen), as the ancestral wisdom of the Mapuche people reminds us.”

If you want to play roblox without any disturbance the learn roblox how to get free robux and you will gain complete access in this game as it is the best online platform for the enjoyment.