Monks killed in Algeria, depicted in ‘Of Gods and Men,’ will soon be beatified 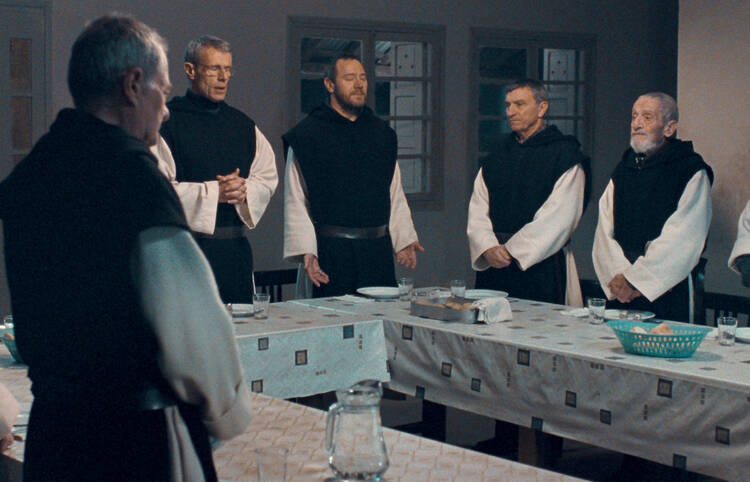 Olivier Perrier and Philippe Laudenbach, foreground, Lambert Wilson, Olivier Rabourdin, Jean-Pierre, Jacques Herlin and Jean-Marie Frin star in a scene from the movie "Of Gods and Men." The seven Trappist monks the film depicts are among the victims of Algeria's civil war being recognized as martyrs.  (CNS photo/Sony Pictures Classics)

VATICAN CITY (CNS) -- A bishop, seven Trappist monks and 11 other religious men and women killed by extremists in Algeria in the 1990s will soon be recognized as martyrs, the postulator for their causes said.

The decree for their beatification should be published sometime in January, Trappist Father Thomas Georgeon said Jan. 1 in an interview with Mondo e Missione (World and Mission), a monthly magazine and website run by the Pontifical Institute for Foreign Missions.

A 10-year-long armed conflict between government forces and extremist Islamic rebel groups left tens of thousands of people dead, making the deaths of the 19 religious "a martyrdom in the midst of a sea of violence that devastated Algeria," he said.

"To pay homage to these 19 Christian martyrs means also paying homage to the memory of all those who gave their life in Algeria those dark years" as they were killed "for their country and for their faith," the priest said.

The conflict began in 1992 when the army canceled the general election that fundamentalist politicians looked ready to win and cracked down on the Islamic Salvation Front political movement. Human rights groups said at least 44,000 people, mostly civilians, were killed in the war between extremist rebels and Algerian government forces.

"To pay homage to these 19 Christian martyrs means also paying homage to the memory of all those who gave their life in Algeria those dark years."

The 19 Catholic priests and religious proposed for sainthood died between 1993 and 1996, and include Bishop Pierre Lucien Claverie of Oran, Algeria, who was killed with his driver by a remote-controlled bomb left by the bishop's residence, and seven Trappist monks, who had been kidnapped from the monastery of Tibhirine and beheaded by a group of Islamic terrorists trained by the al-Qaida network. The monks' story was treated in the film "Of Gods and Men," which won the grand prize at its premiere at the Cannes Film Festival in 2010.

The monks of Tibhirine knew that they were in danger and would likely be killed if they remained in Algeria. French Father Christian de Cherge, the slain prior of the monastery, had written in a letter nearly three years before his death that he and the other monks would willingly offer themselves as a sacrifice for the people of Algeria.

Father de Cherge wrote, "When the time comes, I would like to be able to have that stroke of lucidity which would permit me to ask forgiveness of God and of my brothers in humanity, forgiving wholeheartedly, at the same time, whoever my killer might be.''

"May we meet each other again, happy thieves, in paradise, should it please God,'' he added.

While different extremist Islamic revolutionaries were held responsible for the deaths of many of the religious, Catholic missionaries were largely respected by their Muslim neighbors.

Bishop Claverie in particular was praised for his personal courage and long-standing efforts to promote dialogue between Muslims and Christians in the North African country.

While different extremist Islamic revolutionaries were held responsible for the deaths of many of the religious, Catholic missionaries were largely respected by their Muslim neighbors.

The bishop, who was born in Algeria to third-generation French settlers, contributed to the formation of the first human rights league in Algeria. He was a well-known advocate for peace and a critic of the Islamic rebels killing in the name of God.

He told Vatican Radio in 1992 that Algeria's Christians, who are mostly foreigners, had good relations with Muslim moderates and intellectuals.

He said the problem was among Muslims who were divided between fundamentalists and moderates.

The violence escalating at the time arose from economic and political upheaval, and a cultural and "identity crisis" on the part of the Algerian people, he said after the murders of the Trappist monks. The church's mission in Algeria was to promote a peaceful meeting of Christians and Muslims, he said.

Following Bishop Claverie's murder, St. John Paul II said that "his martyrdom must become the seed of love and the reason of hope."

"In the face of violence that respects no one and nothing, Algeria more than ever needs peacemakers and brotherhood,'' the pope had said at his Sunday Angelus. "May God move the Christians and Muslims there to gather together and imitate the witness of Bishop Claverie.''

I loved the movie, and was moved by the witness of these Trappists monks. The testimony of Fr. Christian, forgiving his killer in advance, and praying to meet him in paradise, is really something. I don't know that I've ever heard anyone pray that particular prayer.